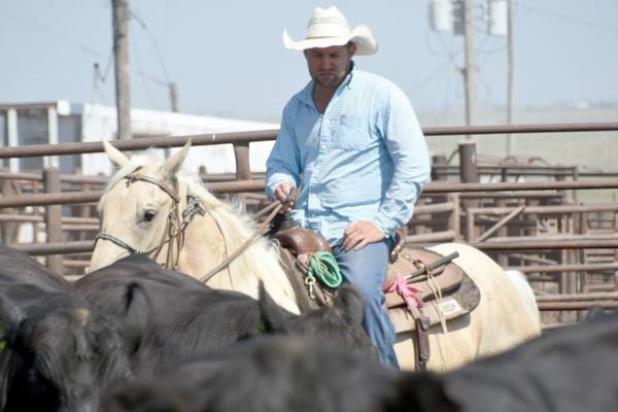 Jorge Cobian inspects cattle on horseback at Timmerman Feeding Corporation southeast of Holyoke. Cobian, who was trained in Mexico, is one of the ranch’s Spanish-speaking veterinarians. — Johnson Publications photo

Reflecting the growing demand for Spanish-language skills in the livestock industry, this fall, Colorado State University will be offering a Spanish-language certificate specifically for undergraduates interested in veterinary medicine.
One of the backers of CSU’s new program, former Colorado Livestock Association president Mary Kraft, told the Denver Post in July that about three-quarters of Colorado’s agricultural workforce is Hispanic.
Though exact numbers are hard to come by, employers in the livestock industry report that a significant number of their veterinary staff do not have a fluent grasp of English.
Most veterinary medicine programs don’t include bilingual training, and mainstream Spanish courses don’t include the specific vocabulary necessary for communicating with animal care specialists whose primary language is Spanish.
The Spanish for Animal Health and Care certificate at CSU, which is being run through the Department of Languages, Literatures and Cultures, will give undergraduate students the chance to learn Spanish with an expressly veterinary emphasis, bridging the gap between the classroom and the expectations of employers, which are shifting along with the demographics of the industry.
The university hopes that, by offering the program, students will be more well-rounded and ready to tackle the communication issues within their field, in addition to scientific research.
Janna Smith of Holyoke is a graduate of Haxtun High School and CSU who will be entering the university’s doctorate of veterinary medicine program this fall. She said that her undergraduate career, and particularly her coursework with Department of Animal Sciences associate professor Noa Roman-Muniz, has helped her recognize the value of bilingual skills for new veterinarians.
“I think it’s invaluable,” she said. “There’s no way you can get by with using hand gestures and hoping that you’re explaining things right when the health of the animals and the community are at stake.”
Roman-Muniz was a key player in the development of the program, along with instructor Shannon Zeller and professor Maura Velázquez-Castillo.
Smith said the majority of workers in the dairy farms that she toured as an undergraduate were either bilingual or spoke Spanish exclusively.
She added that miscommunications between members of a veterinary staff can lead to serious complications with medications like antibiotics, whose misuse can impact large groups of animals.
For the owners of livestock operations who currently employ Spanish-speaking veterinarians, hiring graduates of a certificate program like CSU’s will allow them to more effectively use the skills of current employees.
Clinton Walters is the manager of Timmerman Feeding Corporation in Holyoke. He said that six of the eight employees at the feedlot have some Spanish proficiency, and three speak Spanish almost exclusively. Two of his Spanish-speaking veterinarians, Jorge Cobian and Alejandro Ramos, received their formal training in Mexico before immigrating to the United States.
Although they have a few employees who are fluent enough in both languages to serve as translators, and some of the Spanish speakers have learned functional English, Walters said the crew still leans on Spanish-English translation applications for simple interactions.
“Google Translate is what we use a lot of the time, if I need to communicate with one of them,” he said.