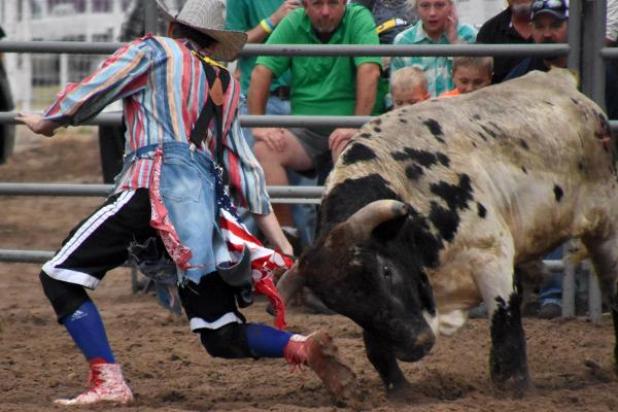 The bullfighting featured in Bulls Gone Wild! will return to Phillips County on July 28 for the fair. — Johnson Publications file photo

Fairgoers, get ready for a ‘Small Town Showdown’

Combining the appeal of rural living with the competitive nature of the annual Phillips County Fair, the 2018 theme is “Small Town Showdown,” and coordinators are hoping to see an exceptional turnout in new and long-standing contests.
One doesn’t have to be a 4-H member to strut their stuff at the July 24-29 fair. Board president Kayla Kafka encourages residents to check out the many open class categories, where people of all ages can enter “just about anything.”
New to open class is a “trash to treasure” category in which competitors can enter any repurposed item. Also new this year is a beef jerky division in the preserved goods department. And those are in addition to the scores of other open class categories, including baked goods, fine arts, needlework, crops, floriculture, crafts and vo-ag mechanics.
As usual, there will be a parade Saturday morning. In designating a grand marshal for the parade, Kafka said they will be honoring the memory of Merle Jackson.
The fair board is still seeking a fair queen for this year. Princesses must be age 12-16 and queen 16-20, as of June 1. For information about being fair queen or princess, contact Kay Schmidt at 970-580-0685. The deadline is Monday, April 30.
In addition, nightly features will offer entertainment throughout the week. Wednesday night will see a return of the Thrashers 5K, hosted by the local softball team. Thursday night’s entertainment will be barrel racing. New on Friday night will be the Heartland Pulling Series, a diesel truck and tractor pull. Back again for the Saturday night feature is Bulls Gone Wild! Afterward, country singer Lexi Larsen, originally from Ogallala, Nebraska, will be in concert at the beer garden.
The fair board received many requests to bring back the Sunday church service at the fairgrounds, and as a result, it has returned to the schedule for the 2018 fair.
Instead of a carnival at the midway, this year’s fair will feature Ninja Nation, a 250-foot obstacle course fashioned after American Ninja Warrior. Both kids and adults will have the opportunity to go head to head in continued small-town showdowns Friday and Saturday.
Kafka said the Dutch oven cook-off will return Thursday evening, and the junior livestock sale is scheduled for Saturday afternoon. Of course, various livestock will be on-site throughout the duration of the fair, and it should be a prime opportunity for locals to see the Phillips County Pavilion and Education Center, which is on schedule to be completed in time for this year’s fair.