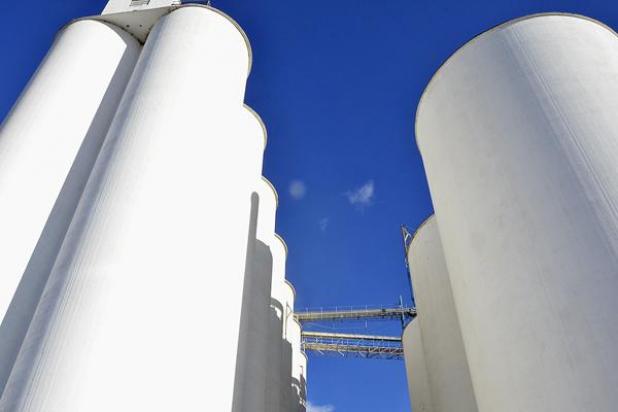 Large grain storage facilities usually have towering concrete elevators that can pose a danger if federal regulations are not adhered to. — Johnson Publications photo

According to researchers at Purdue University, West Lafayette, Indiana, more than 900 cases of grain engulfments have been reported with a fatality rate of 62% in the past 50 years.

Grain Bin Safety Week is Feb. 16-22 to help bring awareness to the dangers that can exist when working around grain.

The grain handling industry is full of risk, and workers can be exposed to numerous life-threatening hazards on a daily basis.

Awareness and taking precautions can make the difference between life and death.

Suffocation from engulfment is a leading cause of death in grain storage incidents.

In 2010, at least 26 U.S. workers were killed in grain engulfment accidents—the highest number on record.

Flowing grain is like quicksand and will pull a 165-pound man down to waist level in seconds, burying him in less than a minute.

One cubic foot of grain weighs 50 pounds. A 165-pound person buried neck deep would require 625 pounds of force to pull them out.

Most experts agree that once someone is trapped in grain above the knees, there’s almost no chance of escape without assistance, taken from an article on “Grain Bin Safety.”

“If a person is buried in grain to the waist, the force of the grain would prevent extraction by just ‘pulling them out.’ In fact, if you even could pull them out, it could literally pull them in half,” said Rick Elliott, a rescue captain with the Imperial Volunteer Fire Department.

Bridged grain is a hardened crust-like mass caused by “out-of-conditioned”  grain that contains a cavity or pocket underneath.

This inconspicuous hazard is a death trap for any worker. Never walk on the grain without breaking it up with a long pole from outside the bin, according to an article on grain bin hazards.

Crusted grain is similar to bridged grain which is often caused by high-moisture grain, only the grain sticks to the bin walls.

If a worker enters the bin, the grain can break free and “avalanche,” suffocating the worker.

Click here to read the rest of the article in our FREE online section: A Salute to Grain.