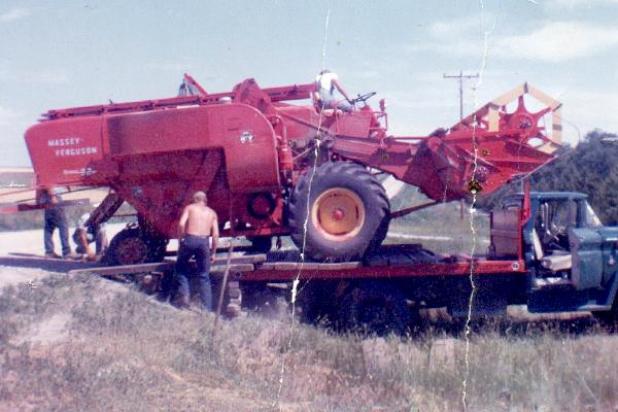 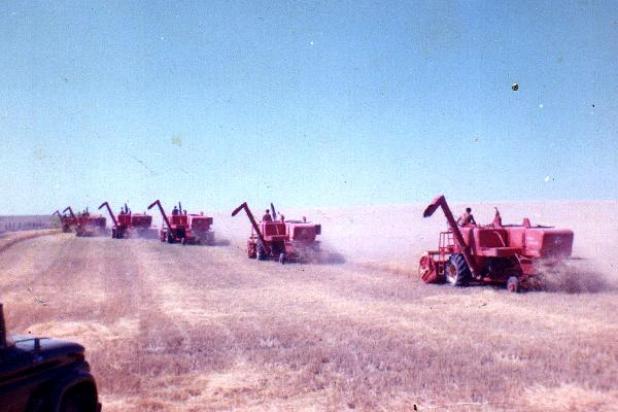 Roy Pfaltzgraff’s harvest crew works a field in 1963.  The combines pictured are Massey Ferguson Super 92s, which had no cab and cut 14 feet of grain at a time. Pfaltzgraff worked on the crew from 1962 to 1963, to raise money for college.

Harvest brings back memories for Pfaltzgraff

Back in the day, cutting barley used to be itchy business, Roy Pfaltzgraff Jr. of Haxtun explained.
When Pfaltzgraff was working on a cross-country harvest crew in the ’60s, combines didn’t have cabs. The Massey Ferguson Super 92 that Pfaltzgraff operated was open to the elements, including the spray of barley chaff that billowed in the wake of the crew.
One day, toward the end of the season, the crew was harvesting a field of barley near Cut Bank, Montana, and decided to wash up in an irrigation ditch next to the field. The ditch was fed by runoff from nearby Glacier National Park — the crew didn’t know this at the time, and dove in.
“It was cold,” Pfaltzgraff laughed. “Terribly cold.”
Pfaltzgraff spent much of his childhood outside of the U.S., so his summer job as a harvester — which took him from Texas, through Holyoke and nearly to the Canadian border — gave him the chance to explore his parents’ country more than he had been able to as a child.
Pfaltzgraff’s parents worked as missionaries affiliated with the Church of the Brethren in Nigeria. He attended a boarding school overseas before going to Lancaster County, Pennsylvania, to finish high school.
In the States, Pfaltzgraff also worked for his uncle, who ran a dairy farm. While the experience wasn’t always pleasant, Pfaltzgraff’s time with his uncle gave him the foundational knowledge of agriculture that would allow him to forge his own future out West.
“We were both bullheaded, so when I graduated from high school I just determined that I wasn’t going to stay in the East,” he said.
Pfaltzgraff worked on a harvest crew to pay for his education at McPherson College in Kansas, where he double-majored in chemistry and math. His bosses were Ike Pauls and Elmer Adrian, who ran the crew out of Buhler, Kansas.
Pfaltzgraff’s crew moved their machinery down to Texas on Memorial Day weekend and continued cutting through the first week of September. The crew harvested wheat, as well as barley, oats and flax.
Pfaltzgraff worked as a field foreman and operated a combine. After passing through Oklahoma and Kansas, the crew was contracted to cut around Paoli and Holyoke.