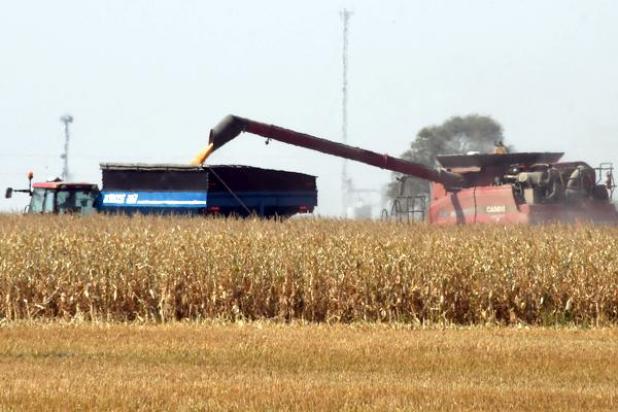 Corn harvest is underway in the area, and most of the corn that’s currently coming in is dryland corn. Many crop yields are reduced due to the hot and dry weather. Potatoes were reported as being completely finished, with millet, kidney bean and pinto bean harvests nearly complete. Sugar beets were reported at about 15% done in the Holyoke area as of Friday, Oct. 9. — The Holyoke Enterprise | Johnson Publications

Hot, dry weather has had its impact on crop yields and harvests in the area.

“We had a terrible drought this year,” Scott Kirkwood, grain department manager of CHS Grainland, said, adding that yields are down significantly.

He said Tuesday morning, Oct. 13, they are about 26% done with corn, and most of the corn that is coming in is dryland.

He reported that corn harvest is a week to 10 days early this year. Test weights are running 54-55 pounds, which is 1-2 pounds less than the last several years.

Paoli Co-op general manager Shawna Mason said corn harvest was about 25% done Monday, Oct. 12, and most of what they’re getting in is dryland corn, too.

Mason said the yields are below average, but the test weights are 53 pounds and above, which she said is good considering the drought.

Mason also noted that they are completely done with millet. Yields were down, but she said the crop itself looked good, and the harvest was on schedule.

Similarly, Kirkwood said millet is about 98% done and the quality of the crop is good, with the harvest on schedule.

Luke Whitehill, agriculturalist at Western Sugar, said Friday, Oct. 9, that they were about 15% done with the sugar beet harvest in the Holyoke area.

He said it is an average yield as far as tons go, and he is optimistic about this year’s sugar content, which he hopes will be over 17%.

“It’s a really exciting crop we have coming at us,” Whitehill said.

He said the regular harvest was about three days late and began Oct. 12, when he expected more temperate days to begin.

Tom Harmon, general manager of Jack’s Bean Company, said the heat during the blooming season made both kidney and pinto beans a little smaller, but both harvests are about 95% done.

Harmon said kidney and pinto bean yields were about average, and he said the beans were of pretty high quality overall.

He noted that popcorn harvest is just getting started, with the first load having been taken in Oct. 9.

Harmon said if the weather holds, the majority of the popcorn could be done in about three weeks.

Steve Moore of Western Potatoes said the potato crop was affected by the hot and dry weather, pointing out that both night and day temperatures were hot all season.

He said potato harvest was completed Saturday, Oct. 10, which was about a week to 10 days late. The yield was below average, but the overall quality of the crop was good.