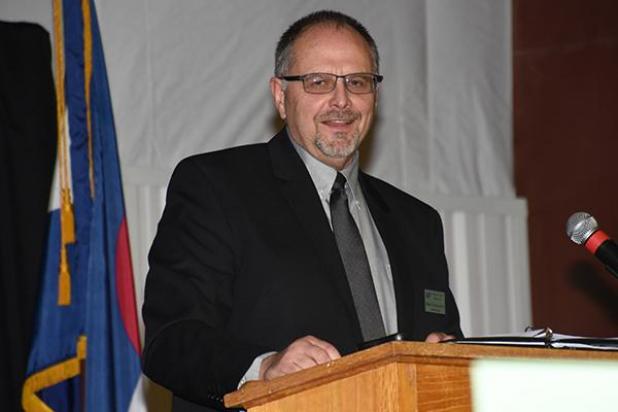 Highline Electric Association has come a long way since its incorporation in 1938, and the rural electric cooperative celebrated with its northeast Colorado and southwest Nebraska members at its annual meeting Tuesday, March 20.
Tables at Phillips County Event Center in Holyoke were overflowing as members gathered for a meal, presentations and door prizes.
“It was in the spring of 1937 that the dream and work began by pioneers in our communities to bring electricity to the farms of our area,” said Highline General Manager Mark Farnsworth. The hard work began after President Franklin Roosevelt signed the order for the Rural Electrification Administration in 1935 and the Rural Electrification Act in 1937.
After Highline was incorporated in 1938, it was allotted $85,000 the following year to build 100 miles of line. The first services were energized in 1940.
“We have grown from 101 miles of line to 5,187 miles, from 189 meters to 10,366 meters, from 288,000 kilowatt-hours sold to over 447 million, from $8,752 of revenue to $52,274,000 in 2017,” said Farnsworth.
In 1944, president of the board Harry Andrews took on the overwhelming challenge of expanding the service territory. When he was traveling the country roads, he saw a farm on the top of a hill, and that farm needed electricity just as badly as the farm he had just passed. “Beyond that farm was another hill and beyond that hill another farm and on and on, all of the farmers needing and wanting the blessing of electricity,” said Farnsworth.
Today, Highline serves a 3,500-square-mile territory in parts of six Colorado counties and four Nebraska counties.
“There has been 80 years of vision with men and women giving of their time and energy to continue the vision of these early founders of Highline,” said Farnsworth. “Your involvement as members of Highline will be invaluable as we look to the future.”

Members don’t seerate  increase in 2018
“The board and staff at Highline understand and take seriously the importance of the agicultural community to Highline and the impact of low commodity prices,” said Farnsworth. “We will do what we can to keep rates affordable.”
Highline members did not see a rate increase on their bills in 2018.
Farnsworth noted that Tri-State G & T, which provides electricity to Highline, also did not have a rate increase this year. “Tri-State is continuing to take steps to cut costs, increase revenues and manage its operations more efficiently to minimize rate increases and keep the cost of wholesale power competitive.”
He said Tri-State is forecasting flat and stable rates for the next five years. Highline forecasts a rate increase of 1 percent in both 2019 and 2020 and a smaller increase in 2021. They anticipate using deferred revenue in those three years.

Electric co-op not against renewables
“Despite criticism that Tri-State is anti-renewable, we have continued to increase the renewable portion of our generation portfolio,” said Highline director Leo Brekel in his annual report.
Of the energy sold to members from Tri-State, about 30 percent was generated from renewable sources last year. That’s a considerable increase from the 17 percent reported in 2007.
“That is the largest percentage of renewables in generation and transmission companies across the country and one of the highest of any utility in the U.S.” said Farnsworth.
Included in Highline’s renewable projects is the Trailblazer Waste Heat Generation Site. Emphasizing its value to Highline, Farnsworth said it has brought $2.3 million to Highline’s bottom line since 2009.
Highline is currently looking at options for a utility scale solar project that could provide savings to members over the next 20 to 25 years. It would be a way members could buy renewable energy without building their own solar array behind their meters.
Farnsworth reminded members that Highline won’t move forward with any project until it knows it is financially feasible.
Highline is also in the functional testing stage of its Advanced Metering Infrastructure Project. The new technology will enable the co-op to use radio frequency to read meters remotely from the office. Commercial installation is set to begin in May or June in the eastern part of the service territory, and it will take three years to build the system.

Financial report showsincre ase in revenue in 2017
Dennis Herman gave the financial report to Highline members at Tuesday’s annual meeting.
In 2017, Highline purchased 482,193,523 kilowatt-hours from its power supplier, Tri-State G & T — an increase of 55 million from 2016.
Highline sold to its members 447,852,892 kilowatt-hours, an increase of 53 million from the previous year.
Herman said irrigation accounted for the largest share of purchases at 49.9 percent, followed by large commercial at 32.6 percent, residential at 13.1 percent and small commercial at 4.5 percent.