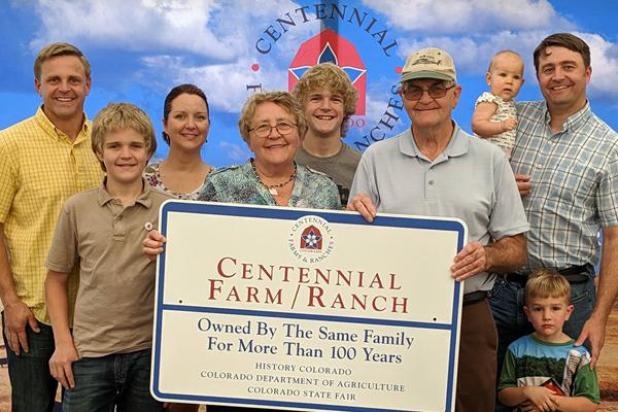 Kleve farm in the family for 100 years

Five generations of Kleves have lived in the home on the Kleve family farm in Phillips County that was recognized last month as a Centennial Farm and Ranch in the State of Colorado.

Current farm owners Gene and Rita Kleve represent the third generation. They, along with two of their three sons and four grandchildren, attended the Aug. 23 event at the Colorado State Fair in Pueblo which recognized farms that have seen more than a century of operation by a single family.

The Kleve Farm and Ranch was among 22 who were recognized for their 100-year history.

Frank J. Kleve was one of 11 children in his family and was born in Humphrey, Nebraska. He was the first to leave home when he traveled west and purchased a farm west of Holyoke. That farm, however, was soon sold, as he was called into service during World War I.

In 1919, Frank returned to Holyoke, married Elizabeth Heitoff and purchased a different farm. This time, the farm was further from town and a higher price.

He could not have known that this piece of land would withstand the tests of time, expand in size and provide a great way of life for the families to follow.

Located 10 miles east of Holyoke, the original farm that he purchased 100 years ago was 160 acres.