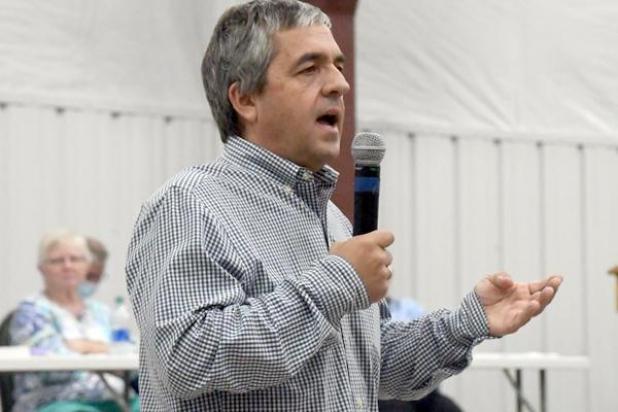 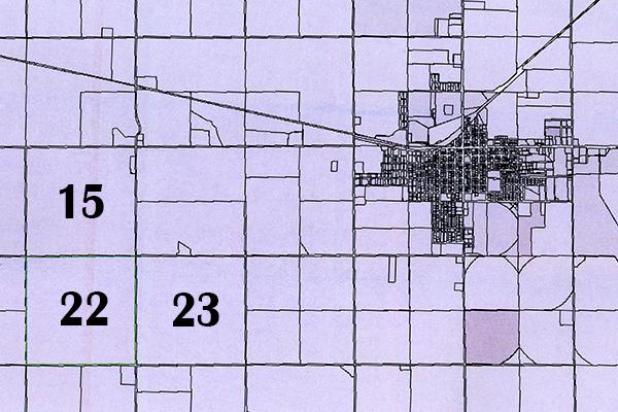 Weldco Farms owns sections 15, 22 and 23 pictured southwest of Holyoke. A proposed commercial feedlot would be built in the northeast quarter of Section 22, located 2 miles from the west edge of town.

About 150 people turned out for a public hearing on a conditional use application for Weldco Farms LLC on Monday evening, July 27, at the Phillips County Event Center.

The Phillips County Board of Adjustment heard a presentation about a proposed commercial feedlot southwest of Holyoke for Aurora Organic Dairy, and the public was given the opportunity to ask questions.

The piece of land in question is less than 160 acres in Section 22, which is currently zoned A2. The application asks for its use to be changed from farmland to animal feeding.

Aurora Organic Farms is proposing to construct a heifer raising facility that will house 7,000 heifers when fully operational. It will be certified organic, which requires the heifers to be grazed on organic pasture during the grazing season. Of the 1,900 acres at the property, the majority will be pasture. Approximately 25 pens would be constructed in an open lot style, in addition to a lagoon to collect runoff, commodity bays and a small office.

At the end of Monday’s hearing, which lasted more than two hours, board of adjustment chair Mark Lutze told the crowd that no decision would be made that night.

Immediately following public comments at the July 27 meeting, the board of adjustment, out of an abundance of caution, determined that a recess of the meeting was necessary to gain more information and a clearer understanding of the topics discussed.

Therefore, the board will take written comments from the public until 4 p.m. Wednesday, Aug. 5.

Those questions requiring answers from Aurora Organic will be forwarded to them with a request for a comprehensive response by 4 p.m. Wednesday, Aug. 12.

Upon receipt of the response from Aurora Organic, the board will review all information available and make a recommendation to the county commissioners on or around 4 p.m. on Wednesday, Aug. 19.

During this time, the board of adjustment will also attempt to schedule a tour of an Aurora Organic facility for residents of Phillips County. An announcement of a tour will be released on the County’s website and Facebook page, as well as The Holyoke Enterprise and The Haxtun-Fleming Herald.

Many community members in attendance at Monday’s hearing already had questions for Aurora Organic, and many were outspoken with negative comments against the proposed feedlot.

What kind of value will the feedlot bring to Phillips County? Where will the employees come from and where will they live?

What will the feedlot do to limit odors and insects? Will the water used at the facility and pastures cause other wells in the area to go dry? Will the City of Holyoke’s drinking water be contaminated?

What does it take to be certified organic and what guidelines have been followed? Where will organic feed be purchased? Why can’t the feedlot be located somewhere else that’s not so close to Holyoke?

Juan Velez, chief agricultural officer for Aurora Organic Farms, was on hand to present the feedlot proposal to the board of adjustment.

Weldco Farms owns Sections 15, 22 and 23 southwest of Holyoke. The feedlot is planned for the northeast quarter of Section 22, which is at the intersection of county roads 33 and 20, about 2 miles from the west edge of town.

Aurora Organic plans to bring heifers that are around 5 months old from its facilities in Weld County. The heifers would be at the Holyoke facility until about 22 months of age.

Velez said that some of the feed used by Aurora Organic Dairy is already being produced in northeast Colorado, so it makes sense to locate a facility in this area. The company is also happy to work with local corn farmers who want help converting to organic feed that can be used at the feedlot.

The pastures owned by Weldco Farms have already undergone a three-year process to become certified organic. The heifers are required to graze for at least 120 days from about mid-April to the end of September. Water troughs in the pastures will be utilized during the grazing periods, and electric fences will be moved around based on the grasses that are ready to be grazed.

Animal welfare is very important to Aurora Organic, said Velez. Shade is provided in the open lot pens, which are routinely harrowed and scraped. “The cleanliness of the pens is paramount to us,” said Velez.

Prevention of disease is critical to the organic operation’s success. The company has a strong vaccination program and utilizes both internal and local veterinarians. Antibiotics will be used to save an animal’s life, but that animal must then be removed from the herd.

The runoff from the open lot pens will be collected in a lagoon and applied to the adjacent fields. The dry manure regularly collected from the pens will also be applied to the fields as organic fertilizer, and any excess manure will be offered to neighbors as fertilizer. Aurora Organic takes into consideration the weather conditions, prevailing wind direction and time of day of land applications.

Velez said that the manure in the pens would not heavily infiltrate the ground and would not affect any drinking water located downstream. The lagoon will also be lined to avoid seepage. Additionally, no pesticides or herbicides that could potentially contaminate water will be used.

Velez said organic heifer operations have differences in odor from other feedlots because of what the animal is eating. In regard to the Weld County facilities, he said, “I would love to take you and drive you around and roll the windows down.”

According to Velez, insect populations are best controled by not having standing water in the facility. As a last defense, organic operations can use fly sprays and baits approved by the U.S. Department of Agriculture.

Aurora Organic also aims to keep dust down. Strict internal policies will be used to enforce low driving speeds around the facility. On average, there will be six trucks of feed per day, which is highly dependent on harvest seasons. There will be two trucks of heifers per week on average.

The three sections of land already have three existing irrigation wells. One of those will have a change of use, but the three wells will be pumping the same amount of water they traditionally have. A permit to construct a new well has already been issued, and Velez said its water usage will be relatively small. A three-day supply of water will be stored in a tank at the facility.

Based on the company’s calculations, a significant buffer is in place for the amount of water required for 7,000 heifers. The water needs of a heifer are less than those of a dairy cow, Velez explained.

He said the Holyoke facility will be looking to hire eight to 12 employees, and all must have legal documentation. The jobs will be publicized locally. Needs include tractor operators, feed truck operators and artificial insemination technicians, among other jobs. For a point of reference, Velez said a feed operator without experience would start at approximately $40,000 per year.

Velez said the company plans to rent homes for the managers, and if none are available in Holyoke, they will look in surrounding communities. He said Aurora Organic wants to work alongside its communities to help employees find housing, understanding that that’s an issue in Holyoke. He said they would not put mobile homes at the facility site without input from the community.

The facility itself will also contribute to the local economy through fuel purchased, repairs that need to be made, etc.

Velez said Aurora Organic plans to spend close to $6 million to start the Holyoke facility. “The investment is very significant,” he said. “We want to come here to stay here.”

Velez said he was under the impression that this was an agriculture-friendly community. And he assured the crowd that Aurora Organic works very hard to build good relationships with its neighbors. “I just want to ask for the opportunity for you to get to know us.”

If the application and proposed feedlot are approved, Aurora Dairy plans to break ground next month. Heifers would arrive in January or February 2021, and the facility would be at its full 7,000 capacity in 2022.

What if it’s not approved? “We don’t have a plan B,” said Velez.