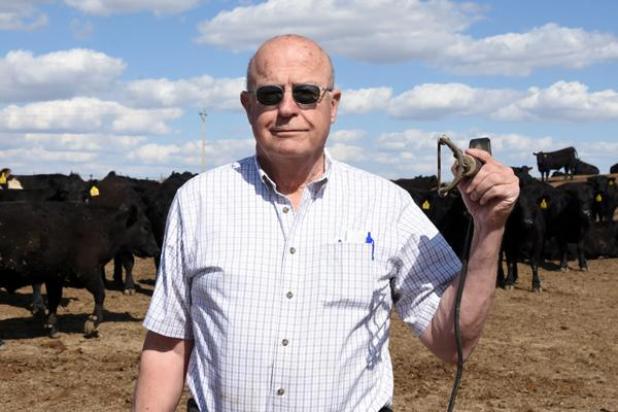 Bob Bledsoe holds up the electric iron used to mark cattle with Bledsoe Cattle Company’s distinctive left-bowed quarter-circle brand. The brand is one of a few single-character designs in Colorado and has been in the Bledsoe family since 1945. — The Holyoke Enterprise | Johnson Publications

Much like license plates, every brand is unique. In Colorado, no two ranchers can have the same brand, and neighboring ranchers are prevented from owning brands that could be confused.
They also give their owners the chance to make a statement for the world to see. Ranchers’ initials are a popular choice. Others are more cheeky — both brands owned by Phil Hart of Haxtun include hearts, and Colorado brand commissioner Chris Whitney registered his “2D” brand after having his second daughter.
But while Colorado vanity plate holders have seven characters to express their innermost convictions, ranchers are limited by the fact that brands, like other scars, tend to splotch, spread and fade over time. The more complex the brand, the more likely it is to lose its definition.
For all of these reasons, single-character brands are a rare and highly sought after commodity in Colorado’s cattle industry.
Bledsoe Cattle Company of Wray owns one of those brands — a left-bowed quarter-circle, which looks like a left parenthesis — along with six other multi-character brands.
The ranch uses the one-character brand to mark their feedlot animals, and ranch partner Bob Bledsoe said they own about 3,500 cows with the mark.
“The big thing about our brand is ease of application,” he said. “You cannot screw it up.”
The Bledsoe family got the deed to the brand in 1945 when they bought out another Colorado ranch. Even then, Bledsoe said, one-character brands were considered a rarity.
“They’re sort of a strange deal,” he said. “Even most of the really old brands have at least two characters.”
Because Bledsoe was a young child when his family bought the brand, he isn’t sure how much they paid for it, but Whitney said buyers today might fork over tens of thousands of dollars for the perfect brand.
As prices are set by the market, state brand inspector Mat Linman said even a three-letter brand could fetch a high price if it matches a buyer’s initials.
“Basically what it boils down to is whether someone will pay money for it. There’s no [Kelley Blue Book] value for them, so to speak,” he said.
Designs are often worth more than their practical value. Whitney said that, among producers, brands are a status symbol, which goes double for one-character brands. Some cowless Coloradans buy and register brands for the cachet alone.
“Of course it has to be something that could reasonably go on an animal, but a lot of people will actually get a brand just because they like the culture and the history behind them,” he said.
Registering a new brand with the state costs $200, and owners pay $60 per year to keep their brand valid. Once a producer gets the deed for a design, they are free to trade, auction and sell it to whomever they want, as long as it doesn’t conflict with a nearby rancher’s brand.
Currently registered brands include everything from letters and numbers to moons, shields, shovels, bells, fish, hash signs (called “pigpens”), flags and more.
Still, Linman said the scar left by a branding iron is about one-quarter inch wider than the iron itself, so designs with simple, unconnected shapes are more likely to leave distinctive scars. Intersecting lines and other fine details can blur together as the burn heals. That means single-character brands are also easier to read.
Most of the brands registered today contain three characters, Whitney said. Owners of single-character brands are among an elite few.
But despite the pretty penny that the Bledsoe brand could potentially fetch for Bob, interested ranchers can save their breath — he says it’s not for sale.
“It’s a family tradition,” he said. “For us, it’s the perfect brand.”

There are lots more articles like this one in the 2019 Salute to Beef section. Click here to read it for free!