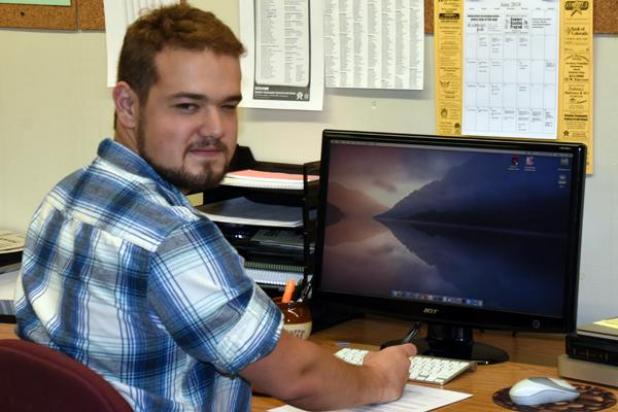 Straight out of college, Max Levy (pronounced leevee) joined The Holyoke Enterprise as a staff reporter Monday, June 11.
Originally from California, Levy said he fell in love with Colorado while at the University of Colorado Boulder, and he’s glad for the opportunity to stay in the state to work.
Granted, Holyoke does not have the mountains on the horizon, but it’s community media that Levy said he developed a passion for in college and something he looks forward to experiencing in Holyoke.
He said he also likes having actual seasons with weather changes, far different from his Southern California upbringing.
Levy earned his Bachelor of Science degree in journalism—news-editorial from CU Boulder last month. He has also completed graduate coursework in multimedia storytelling and data analysis.
While at CU, he served as a multimedia journalist for CU News Corps from January 2016 to April 2017 and was an intern reporter for the Boulder Daily Camera from January-August 2016.
A semester abroad in the fall of 2016 took him to Morocco, where he was a freelance writer, reporting on the situation of sub-Saharan migration into the country. He got involved with a migrants’ rights group and did research on a murder that had taken place.
Born in San Francisco, California, Levy spent his childhood in Thousand Oaks, California, graduating from Westlake High School in 2014.
After being accepted at several colleges, Levy was interested in going out of state, but not too far from California.
Contributing factors leading him to CU Boulder were the school’s reputation for a good journalism program and a good marching band, as well as the offer of merit-based scholarships.
A clarinet player for eight years beginning in fifth-grade, Levy started percussion in high school. He joined the drumline at CU, playing the cymbals in the marching band for two years before his semester abroad.
At CU, Levy said, he was struck with the sense of identity and community that existed. “That resonated with me, and I really appreciated it,” added Levy.
Having made a visit to Holyoke prior to being offered a position at the Enterprise, Levy assessed that community and the sense of identity are valued highly in Holyoke. “That’s something I really admire,” he added.
His eventual move to Holyoke was sparked by a conversation on a March 28 flight from Denver to Burbank, California, when he was embarking on his final spring break from CU.
He was sitting next to Jane and Dan Lenners from Imperial, Nebraska. Jane taught a year in Holyoke recently and is a friend of Enterprise publisher Brenda Brandt.
Learning about Levy’s passion for community journalism and his desire to stay in Colorado following his graduation from CU, Jane passed on his contact information to Brandt.
Levy laughs about being chauffeured to Holyoke in Bob Brandt’s right-hand drive mail car after taking a bus to Sterling in late April.
He got a true feel for the small size of Holyoke, as well as its location in the state. “Wow, it’s small,” was his first reaction of Holyoke as he observed the presence of locally owned businesses and had a chance to meet Enterprise staff members.
As a new resident of the community, Levy said he is really excited to be here and looks forward to meeting the people and getting acquainted.
Another pastime of Levy’s is playing chess. And he spends a lot of time reading and learning random things.
“College taught me how to learn and to continue education after my formal education ended,” said Levy. He enjoys learning new things and looks forward to doing that in Holyoke.
Brandt said that Team Enterprise is pleased to have Levy on board to complete the staff. Other staff members include managing editor Darci Tomky, office manager Ashley Sullivan and reporter Jes-c French.