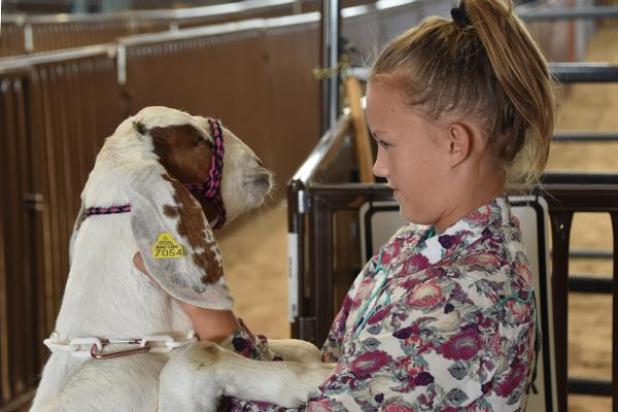 Kaitlyn Thomas says her last goodbyes to her goat, Zach, before the junior livestock sale at the Phillips County Fair on July 28. The sale, which was held in the new Phillips County Pavilion and Education Center, was an emotional day for many in 4-H and FFA. — Johnson Publications 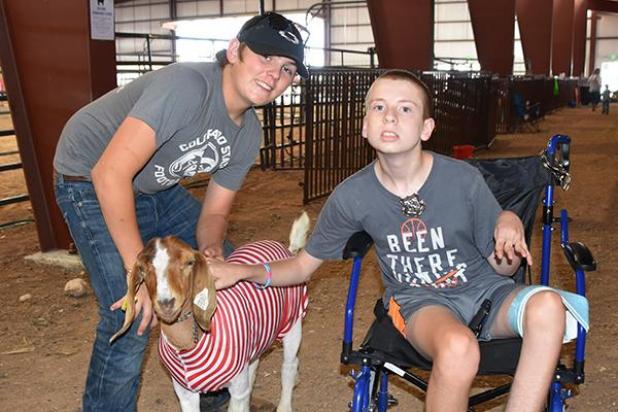 Cousins Brandon and Austin Durbin are pictured from left with Austin’s goat, Ty, before the junior livestock sale at the Phillips County Fair. — Johnson Publications

At the mouth of the chute that led to the auction floor, Zach the goat stood on his hind legs and put his hooves into the hands of Kaitlyn Thomas.
It was July 28, the afternoon of the junior livestock sale at the Phillips County Fair, and Thomas was spending what little time she had left with her goat.
Her grandfather stood nearby, watching the scene unfold.
“We don’t know if she knows that the goat is going to be, uh...” he said, trailing off.
For members of 4-H and FFA, the livestock auction brings up a whirlwind of  emotions. On one hand, the sale recognizes the hard work and care that members put into raising their animals, and, by participating in the sale, the community shows their support for local youth and for the missions of 4-H and FFA.
But it’s also hard saying goodbye to a friend — especially when you know that friend could wind up on a buyer’s dinner table sooner rather than later.
It’s a contradiction that is at the heart of animal husbandry, and it’s one that the youth of Phillips County are learning to navigate from an early age.
The new pavilion at the Phillips County Fairgrounds was used for the auction and to house the fair’s livestock. The south end of the building was set up with dozens of pens for steers and smaller animals like hogs, goats and sheep, while the north end was set up with grandstands and a larger arena in which members could show their animals.
Sitting in a stall next to his hog, Tom, Caleb Santistevan put it succinctly: “It’s hard. I gotta sell him, but I don’t want to.”
The hog dozed as Santistevan spritzed him with a water bottle and brushed the wood chips off of his belly. It was less than an hour before the sale.
The hog was raised on the Kleve family farm. Santistevan got him in March and brought him to his show weight of 274 pounds.
“I don’t really want him to go,” he said.
Goats, beef, poultry, swine, sheep and rabbits were all auctioned off at Saturday’s event. On the opposite side of the holding pens from Santistevan, cousins Brandon and Austin Durbin prepared their goats for the auction.
Austin’s goat, Ty, stood by his side as Brandon washed his own goat in a nearby shower stall.
As the time of the sale grew nearer, the air filled with squeals, bleats and bellows from the 100 animals that were to be sold.
Meanwhile, Ben Kleve was climbing between the pen of his goat, named Pig, and that of his two hogs, named Goat and Chicken.
“I feel sad and happy,” he said. He added that he looked forward to the money from the sale. His goat, which won reserve champion lightweight, was listed at a market value of $126.75, and the hog he was selling was listed at $142.04.
At sale time, sellers queued up behind the auction floor and wrestled to keep their animals from bolting back down the chute.
Buyers had the option of transporting their animals to Haxtun Locker Plant, D&L Meat Company or Wray Packing for processing, or reselling them through the sales committee.