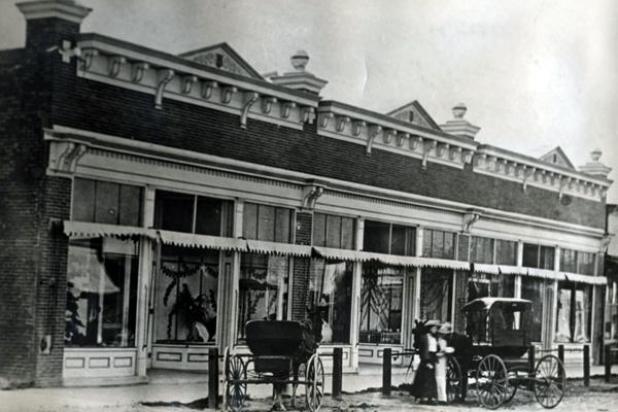 Horses and buggies drop off customers at the mercantile at 105 S. Interocean Ave. in Holyoke. A business partnership in the early 1900s called LeBlanc and Scheunemann was profitable and resulted in this brand-new brick building constructed in 1907. 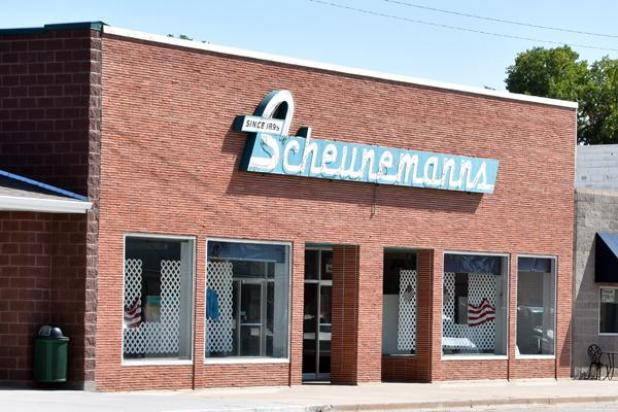 While its front exterior and flashy neon sign — both from the 1950s — are different from the original structure, Scheunemann’s Department Store remains a business icon in Holyoke in 2018. — Johnson Publications 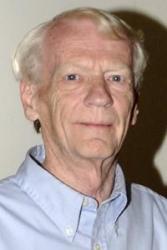 Sitting at the southeast corner of Holyoke’s lone stoplight, Scheunemann’s Department Store is something that’s hard to miss. If it looks like the stately, well-established business has been there “forever,” that’s because it has. Well, almost forever — nearly all of Holyoke’s 130-year history.
And that’s why the unexpected death of 73-year-old August Freeman Scheunemann II — better known as Chip — rocked the Holyoke community on Sept. 19.
Chip was part of the three-generation Holyoke icon that was one of the oldest continually run family retail businesses in Colorado.
“The family loved the people and the business. They especially enjoyed providing good customer service,” said Lisa Absmeier, Chip’s sister who grew up in Holyoke and now lives in Alamosa.
She said her brother, father and grandfather all touched people greatly. They remembered faces, knew customers’ names and provided a consistency that most stores don’t have. “The family is very thankful for all the friendships formed throughout the years,” said Absmeier.
She attributed the store’s success to its ability to adjust the business with the changing times. And with a 12-decade span of time, there were plenty of changes to be had.
Absmeier also gave credit to “the most wonderful and loyal employees” throughout the years.
Longtime employee Carolyn Koberstein said, “It was an honor and a pleasure” to work at Scheunemann’s. She said Chip was an awesome boss who taught her much about the retail business.
Chip has been described as gentle, peaceful, easygoing, loyal and a man of integrity. “You could be a bum or a millionaire — he treated all of those people the same,” said Koberstein. “You have to treat people with respect to keep them coming back to you.”

August Scheunemann begins partnership, family legacy
It was the turn of the century, and even though there were many mercantiles dotting the young, dusty streets of Holyoke, one store was born and proved that it could stand the test of time.
August Scheunemann came to America as a young man in 1888 and eventually settled on a homestead between Holyoke and Amherst. Having studied merchandising at the University of Berlin, it was fitting that he found employment at early general stores in Holyoke.
A decision in 1899 established a future for himself and his family and built a legacy that would last over a century. August began a partnership with a businessman, A. LeBlanc, that created a mercantile called LeBlanc and Scheunemann at the northeast corner of the Interocean Avenue and Denver Street intersection.
“I take pleasure in thanking you for your patronage and kind feelings you have shown me during the nine years I worked for different mercantile houses in Holyoke and would be glad to receive your farther patronage since I have gone into business for myslf with A. LeBlanc as partner,” said August in the Jan. 26, 1900, State Herald newspaper.
He continued, “I shall try to show myself worthy of any favor I may receive from you no matter how small it may be, and I promise to conduct the business in a most satisfactory manner and treat everybody alike. Thanking you for past favors and hoping that you remember me in the future.”
The store sold everything from groceries to clothing for the whole family. “We honestly and candidly promise you that we will deal fair and square with you and that we will make your money go farther than any other firm,” boasted an advertisement in early 1900.
Business proved profitable, and by 1907, the partners were building a new brick building across the street to the south, where it currently stands at 105 S. Interocean Ave.
A grand opening was held at “The Big Store” Dec. 7, 1907, complete with band, orchestra and piano music all day as well as a souvenir for each of the 400 families that signed the guest registry.
“The members of this firm are enterprising and successful businessmen,” said the Nov. 29, 1907, State Herald. “They have prospered in business, and their business has grown as the country has been settled up till they now have as good a business in their line as there is in northeastern Colorado. They have a salesroom in their new building that for an up-to-date business is not surpassed in this part of the state and is a credit to our town and county.
“They have always had unwavering faith in the future of our town and county, and the fact they have recently expended so much money in the construction of the new building shows very clearly that their years of business experience has resulted in strengthening this faith and is certainly a good advertisement for our town and country.”
August would go on to buy out LeBlanc, having already established a strong name for himself in Holyoke.
According to “Those Were the Days” history book, August was very liberal with customer credit policies through the hard times of the late 1920s and into the 1930s. By being able to purchase necessities and arranging to “pay when you could,” he made it possible for many families to remain in the county.
Both August and his wife, Beda, were leaders in the business, civic and social life of Holyoke. August was chairman of the board of Phillips County State Bank, had extensive real estate interests, was active in the politics of the town and county, was instrumental in forming the first Holyoke cemetery board, and was a member of the Elks Lodge and the Commercial Club.
Beda was president of the first PTA in Holyoke and the first library board. She was also a charter member of the PEO Sisterhood and was involved in the Order of the Eastern Star, Fidelis Club, Delphian Club, and Business and Professional Women’s Club.

Freeman Scheunemann embraces changing times
After August died in 1933, Beda and their only son, Freeman, continued the family business.
Freeman had attended school in Holyoke before going to the Kemper Military School in Missouri.
His first love was his family — wife Mildred and kids Karen, Chip and Lisa — with business affairs and civic pride a close second. Interests included Lions Club, Chamber of Commerce, Eastern Star, the Masonic Lodge, Boy Scouts, Rainbow for girls and Band Parents Association.
Mildred got involved with PEO, Eastern Star, Delphian Club, Agenda Club and Holyoke Art Guild.
A notable change to Scheunemann’s Department Store was when the exterior got a major facelift in the mid-1950s. The front was completely remodeled to reflect what local residents know and recognize today, and the iconic storefront windows continued to display high-quality goods through the second half of the 20th century and into the 2000s.
The large neon sign that says “Scheunemann’s” in a script font was added in 1958 and remains on main street today.
In the 1960s, the store discontinued its grocery line but kept selling gift, domestic, footwear and clothing items. Many young men from Holyoke will also remember the store as the tuxedo rental headquarters.
Eliminating groceries wasn’t the first change the business faced, nor was it the last. In its 12-decade history, Scheunemann’s proved it could facilitate the needs of the changing lifestyles of customers.

Chip Scheunemann takes store into 21st century
Chip’s roots and pride in the department store ran deep. He and his two sisters all spent time employed at the family-run business. Chip began working part-time in the store  as a teenager in 1959 before he graduated from high school in Holyoke in 1963. The young entrepreneur went on to graduate from Parks School of Business in Denver.
Chip returned to his roots and worked alongside his father, Freeman, and his grandmother, Beda, until their deaths in 1978 and 1979, respectively.
The business continued under Chip’s management with the cooperation of his mother, Mildred, until she died in 1994.
Like the other Scheunemanns, Chip got involved with local civic organizations, such as Holyoke Jaycees, Holyoke Chamber of Commerce, Phillips County’s Development Committee and Corporation, and the Northern Colorado Consortium.
Chip was known as the town historian and family genealogist. He was always answering questions about people, businesses and locations in and around Holyoke.
Even though Chip was somewhat of a private person, he never knew a stranger. Friends from all over would stop in the store when passing through Holyoke to visit with the Scheunemann family.
Under Chip’s leadership, Scheunemann’s not only stood the test of time but withstood disasters as well. A fire destroyed Ralph’s Bar (formerly a bank) directly to the north of the department store in 1978. Less than 10 years later, another fire took out the Knight & Son business directly to the south. That resulted in smoke damage throughout Scheunemann’s and flooding in the basement.
Through it all, the pressed metal ceiling and the antique freight elevator were among the treasured reminders of the past. Chip also loved using his creativity and construction skills for building projects at the store.
Scheunemann’s Department Store celebrated its 100th anniversary in October 1999 and has been featured in multiple media outlets for its longstanding family history.
In a 2013 interview for Holyoke’s 125th anniversary, Chip said, “Our operation has been the same since day one. Merchandising is different now with big discount stores, but the way we run the business has stayed the same.”