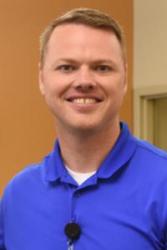 A new face roaming the halls of Melissa Memorial Hospital is Daniel O’Keef, PT, DPT, CSCS, the new physical therapy manager. He’s getting settled in at the hospital and the community after a July 8 start date.
O’Keef is looking forward to treating patients in both physical therapy and occupational therapy in addition to developing new programs for the department.
“I want this to be known as the place people go for physical therapy and occupational therapy,” said O’Keef.
He hopes that some of the new programs will be able to utilize his extensive experience in and passion for sports medicine. O’Keef would love to work alongside local teams and athletic trainers in the areas of injury prevention and performance enhancement.
O’Keef most recently served as a team physical therapist at the College of Idaho in Caldwell, Idaho. He also has experience in orthopedics as well as strokes, brain injuries and spinal cord injuries.
After being raised in Salt Lake City, Utah, O’Keef spent six years in the Army National Guard as a combat engineer. He went on to earn a bachelor’s degree in sports medicine from Utah Valley University in 2012, followed by his doctorate in physical therapy from Idaho State University in 2015.
Based on his experience at a previous job in Ogallala, Nebraska, O’Keef is excited to bring his family back to the small, rural communities of southwest Nebraska and northeast Colorado.
He and his wife, Sally, have six children: Tristan, 11, Reagan, 9, Brooklyn, 7, Stockton, 5, Ammon, 3, and Quinn, 2.
The family is excited to get involved in Holyoke athletics, and the community might even see O’Keef in a coaching role in the future.