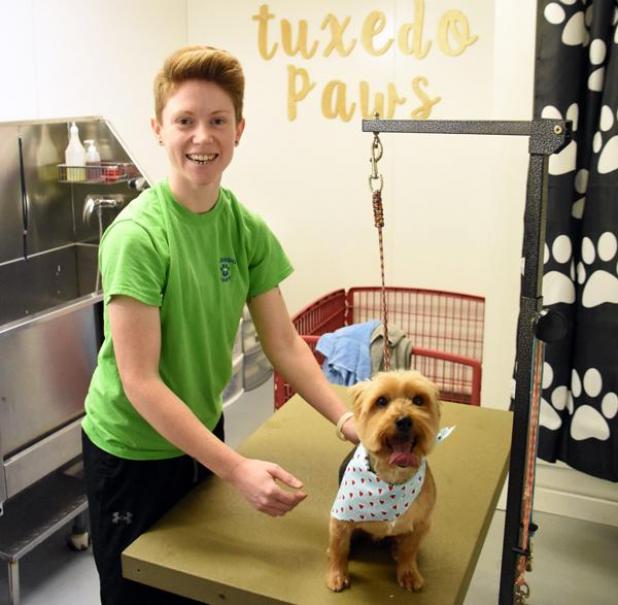 Initially, Alex Blake might describe the opening of Tuxedo Paws as an act of necessity. Her family dog, Sofie, needed groomed, but there was no one local to do it. Simple. There’s more to the story, though.
Long before taking a pair of ordinary kitchen scissors to Sofie’s grown-out fur, Blake dreamed of becoming a vet. Spending time with her down at Tuxedo Paws makes it overwhelmingly apparent that she loves animals and has a natural ease about working with them. It’s not hard to see why she’d want to pursue a career helping them.
It may not have been Blake’s best moment when a college adviser told her she didn’t have much of a chance of becoming a vet a few years ago. But that moment did pave the way for her to become a groomer.
That blow from her adviser and the uncertainty of her future were weighing on Blake when she gave Sofie that first amateur haircut, but her mom, Tess Blake, was impressed by her work. The suggestion that she become a professional dog groomer may have been said in passing, but Blake took it to heart. Immediately, she looked for programs online, and before long, she was enrolled at  Dogs’ Own Grooming School in Loveland.
Upon completion of the eight-week tech program, Blake was offered a job at the school. After a year there, she purchased a grooming business in Loveland, which she ran for another year. Put off by the cost of living on the Front Range, Blake decided to move home. After all, she’d grown up in Holyoke, graduated from Haxtun High School in 2011 and gone into grooming school with the intent of returning to the area some day.
In May, she moved to Holyoke and quickly opened Tuxedo Paws, located at Smith Hardware, 635 W. Furry St. Filling a local dog grooming void, Blake routinely has new dogs come into her care. Owners, it seems, are pleased to have a local option that doesn’t require a drive to someplace like Sterling.