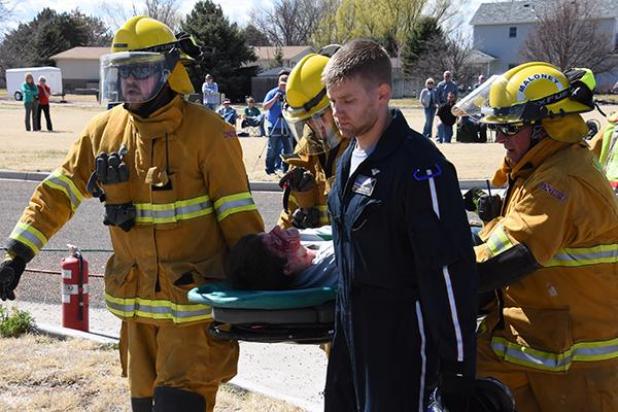 Volunteers from HVFD are pictured from left, Scott Korte, Shaun Beck and Shawn Maloney. They assisted the North Colorado Med Evac crew member, pictured in front, in carrying HHS student Cash Adler on a stretcher to the helicopter. An Every 15 Minutes program was put on for high school students Monday and Tuesday to address the dangers of drunk and distracted driving. —Johnson Publications 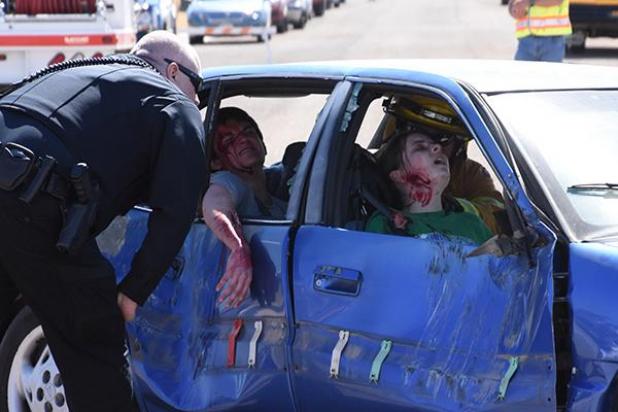 Officer Joe Marcum assesses the condition of two students who acted out the car accident portion of the Every 15 Minutes program. Cash Adler is pictured in the back seat, and Shianne Willmon is in the front. —Johnson Publications

Mock accident is practice for responders, lesson for students

“There’s no possible way distracted driving can be worth it.”
Luke Krogmeier articulated what many Holyoke High School students must have been feeling after an educational program called Every 15 Minutes was held Monday and Tuesday, March 27-28.
In an effort that required the coordination of several emergency agencies, a mock car accident scene was staged at the corner of Heginbotham Avenue and Jules Street. The scenario being portrayed included five high school students who were in a one-car drunk driving accident.
Holyoke Police Department, EMS and the volunteer fire department all responded to the scene, playing the part for onlooking students, but also practicing for actual interagency emergencies in the future.
North Colorado Med Evac, Phillips County Sheriff’s Office, Colorado State Patrol and Phillips County Office of Emergency Management all had personnel on scene as well, going through the motions of responding to a fatal car accident.
Every 15 Minutes was organized by HHS students Brook Prottsman, Austin Herman and Tyler Lamm for an FCCLA project. They worked closely with Kay Schmidt, victims’ advocate of Phillips County, to make the program a reality.
The name comes from a 1990 statistic that someone in the United States dies or is seriously injured in an alcohol-ralated accident every 15 minutes. In keeping with the times, this year’s program also had an emphasis on distracted driving while using a cellphone. Prottsman noted that they hope that the program will help students make mature decisions when there are people’s lives at risk.
Monday morning, the Grim Reaper, played by Chief of Police Doug Bergstrom, visited classrooms throughout the high school, wordlessly taking a student or teacher every 15 minutes. In total, 21 were taken that morning. Bryan Kroeger, chaplain for the Holyoke Volunteer Fire Department, delivered news of the students’ “deaths” to their classmates and read their obituaries.
That afternoon, the entire student body relocated to the scene of the staged car accident to witness their classmates being treated by emergency responders. The 21 “living dead” were in silent attendance with the Grim Reaper still at their side.
In the mock accident, Krogmeier played the role of the drunk driver who caused the accident. He sat, bleeding, next to the crumpled car as students circled the accident and took their seats.
Jaxie Gerk played a passenger who was injured but able to exit the car and call for help. Students listened as she made a frantic 911 call and the dispatcher talked her through it.
Brendan Mayden played the part of a passenger who was thrown from the vehicle and lay unresponsive on the pavement nearby. When first responders arrived, it quickly became clear that he had died.
Shianne Willmon and Cash Adler played passengers who were trapped in the car. When the fire department responded, students got a front-row seat to watch them extricate them.
Once removed, Adler was taken by stretcher to the Med Evac helicopter and Willmon was transported to an ambulance. Responders from all agencies worked seamlessly together to care for each victim.
County Coroner Dennis Jelden was called to examine Mayden, and Holyoke Police Department and Colorado State Patrol worked together addressing the drunk driver, who was later arrested and taken to the jail.
Some of the “living dead” were taken to Melissa Memorial Hospital to watch, as staff there went through the motions of caring for Gerk’s minor wounds and Willmon’s ultimately fatal injuries. Others went to the mortuary to see where victims go when the accident is fatal.
Even after the emergency had been addressed and the scene cleared, the program was not finished. The students taken by the Grim Reaper spent the night writing letters to loved ones and doing team-building activities before they were reintroduced to the school at an assembly Tuesday morning.
At the assembly, there was a video presentation, and some students read their letters to loved ones aloud. Schmidt and Lamm shared poems addressing the tragedy of drunk driving accidents.
Guest speaker Bev Sanburg shared her experience with students, parents and staff in attendance. Sanburg’s daughter, Mallory Funaro, died as a result of a car accident when she was 15 years old. Now Sanburg speaks to schools about the dangers of drinking and driving.
She emphasized that no one is invincible, and one bad decision can affect your life forever. She asked students to take care of each other and speak up if someone is about to drive when they shouldn’t, because “a mad friend is better than a dead friend.”
Phillips County Judge Kim Killin spoke to students about the legal ramifications of driving under the influence.
While the entire event was staged, the resounding response afterward was that real tragedies do happen, and real actions have real consequences. While there was sadness even in the mock accident, the pain of real loss is so much worse.