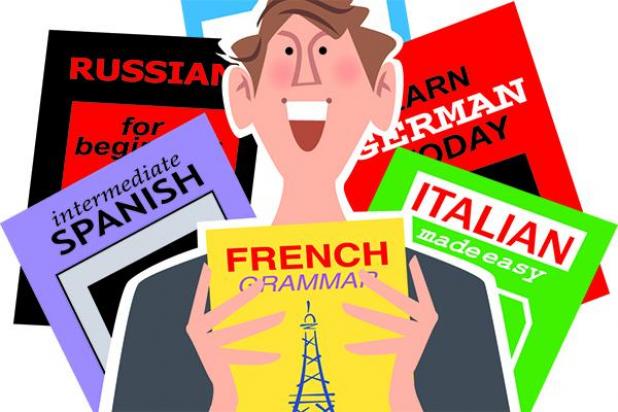 Unilingual: using only one language.

Which one applies to you? Have you ever tried to learn a new language? Do you want to?

People choose to study foreign languages for a variety of reasons, but no matter the reason, there are a number of benefits of learning a new language.

Despite the benefits, studying a foreign language is hard. It takes determination, time, patience and intentionality.

For those of you who are already tackling a new language or who are considering learning one, there are some things to be learned from these seven people who have been in your shoes before.

At 21 years old, Molly Brandt, now 25, began learning a language many people have never even heard before: Nepali.

Her goal: to better communicate with Bhutanese-Nepali refugees and former refugees in the U.S., specifically Pittsburgh, Pennsylvania.

Not only does learning a new language expand one’s social circle and open the door for even deeper relationships, said Brandt, it also “allows you to become a bridge between two cultures and languages.”

She became that bridge between Nepali-speakers and English-speakers to enhance neighborly relations, bring greater understanding and compassion of culture, assist in dire situations and participate in important community discussions.

Brandt used the Growing Participator Approach to language learning 40 hours per week for six months and then part time after that. GPA models the natural process of learning language as a child with a native speaker. The learner listens for a long time before attempting to speak, then using single words, then phrases, then complete sentences.

“Just speak,” she said. Don’t wait for perfection, simply use what language you do have. “As scary as it sounds, try to engage one-on-one with someone who does not speak your native language at all. You will find that in negotiating language with your speech partner, there is great victory in the end, as well as much frustration along the way.”

Brandt added, “Majority of the time, the person you’re speaking with will be so grateful you have made an effort to speak their native language that they won’t care about your mistakes, your slowness of speech and your struggle.”

It was also important for Brandt to learn the culture. Different words are used based on who she’s talking to, and she came to know what topics are or are not appropriate for conversations.

And as a word of caution, “dog” and “chicken” sound similar in Nepali, so Brandt’s had her fair share of strange looks when friends think she’s eating dog meat.

“A lot of people get frustrated and want to give up because they don’t see immediate results,” said 22-year-old Jesus Gardea. “Learning a new language is not an overnight thing, that you wake up the next day being bilingual, but every minute spent studying will pay off down the road.”

Gardea’s work has paid off tremendously. As a native Spanish-speaker, he started learning English when he began school in Holyoke at age 14. In addition to the school’s English classes, which used apps and computers, Gardea would watch movies and TV as well as text people in English.

He tells people that immersing yourself in a new language is a great way to speed up the learning process. “Different ways to do this would be changing your phone language, watching television, listening to the radio, reading magazines and books, all in your new language,” he said.

When Gardea could finally read, speak and listen without using a translator, “this made me feel proud, made me feel more secure about my second language.”

One thing that makes people feel insecure or ashamed is their accent. Gardea says don’t over think it. “In the end, it’s one of those things that people actually like or makes you different.”

“Knowing two (or more) languages can open so many doors for you. The benefits are just beyond words.”

She’s looking forward to being able to communicate with future clients in the veterinary field. And in the meantime, she’s having fun practicing with classmates and watching Disney movies in Spanish.

Her advice: Don’t give up! “It takes time to get to that moment of clarity when it all clicks. Find a buddy to learn with you because that will give you motivation.”

“Besides increasing employment opportunities for those who are bilingual, knowing Spanish and English has allowed me to feel a deeper connection with friends and coworkers who speak Spanish as their first language,” Smith said.