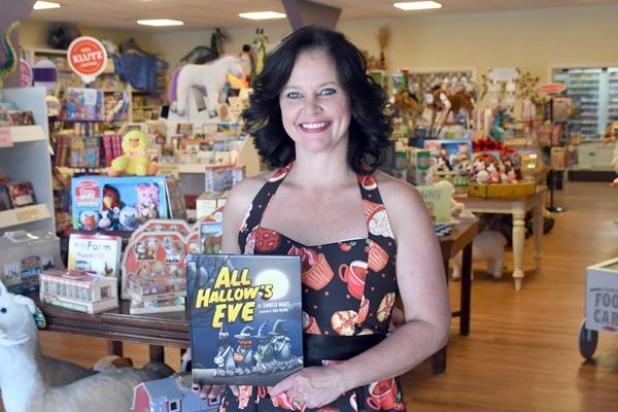 Author Jennifer Hughes prepares for a Saturday, Sept. 7, book launch at Inklings and More. From 10 a.m.-1 p.m., she will be at the bookstore, selling copies of “All Hallow’s Eve” and meeting readers. — The Holyoke Enterprise | Johnson Publications

’Twas the night before Halloween, and all through the house
Not a creature was stirring — except the mad mouse.
We children were resting for an evening of fright
Dreaming of costumes for Halloween night.

The opening lines of Jennifer Hughes’ “All Hallow’s Eve” have the unmistakable sound of a timeless holiday tale, and that’s exactly what she hopes her first children’s book will become. As she readies for the book launch party Saturday, Sept. 7, from 10 a.m.-1 p.m. at Inklings and More Bookstore, she imagines that “All Hallow’s Eve” could be added to any family’s book collection and pulled out year after year to usher in the Halloween season.

In true trick-or-treat spirit, Hughes will be in costume, ready to meet young readers, answer questions, sign copies of her book and take photos at Saturday’s launch. And anyone else who wants to dress up, is encouraged to go for it.

Get to know Hughes, and it makes sense that her authorial debut would be centered on Halloween. So many other holidays are about family — Christmas, Thanksgiving, Fourth of July — but in her mind, Halloween is for the kids. And her love for it goes back to when she was just a kid herself.

Today Hughes describes her childhood self as something of a nerd. She didn’t have many friends, but Halloween came around each year with its magic and changed everything. “I actually felt cool for a day!” she recalled.

One of her early costumes was based on the Queen of Hearts after seeing “Alice in Wonderland” with her grandma. The costume was homemade by her parents, and Hughes remembers that everyone loved it.

On top of the costumes, Halloween meant that she could stay out past dark, after her usual sundown curfew.

“And plus, candy, come on,” she added, the look in her eye suggesting her love for Halloween rivals any candy-hungry kid’s. Two closets full of accumulated costumes at home offer further evidence of that fact.

Something else that becomes abundantly clear as Hughes tells her story is that family is central. “All Hallow’s Eve” was written in October of 2000, and it was originally a poem for her nieces Brittany and Haley, who were just 10 and 2 at the time.

Working for Alvarado Construction, Hughes had to take her lunch break at her desk one day to direct passing visitors to a meeting. During that lunch, she typed out the poem and printed it out for her nieces. She went straight to her sister’s house after work to read it to them, and they demanded she reread it — again and again.

Upon hearing it, Hughes’ own mom encouraged her to have it published. For five years, Hughes tried to find an interested publisher but had no luck. When her daughter, Brooklyn, was born, the book took a back seat, but it was never forgotten.

“I always knew I was going to try until the day I die,” she said.

Now that Brooklyn is a sophomore in high school and Hughes’ son, Justice, is in fourth grade, her book has finally been published. Rodney, the love of her life, wanted to see her dream come true and financed publishing through Mascot Books.

“Nobody’s ever supported me like he does,” she said, so obviously appreciative.

Hughes and her family moved to Holyoke from the Commerce City area in April. Though they’ve lived here for just a few months, they’ve already embraced the community. Hughes works at Holyoke Marketplace and serves on the Phillips County Players board. She and her children have acted in recent productions, and though Rodney is often out of town for work, he’s helped out with the Players as well.

“Being here is like having a great, big family,” Hughes said of life in Holyoke, which she’s found quite different than her time living in the city.

With one book published, Hughes is already looking forward to her next. “American Legend” is another children’s book, but this time, she’s using the genre to tell her uncle’s life story. She expects it to be out next year.