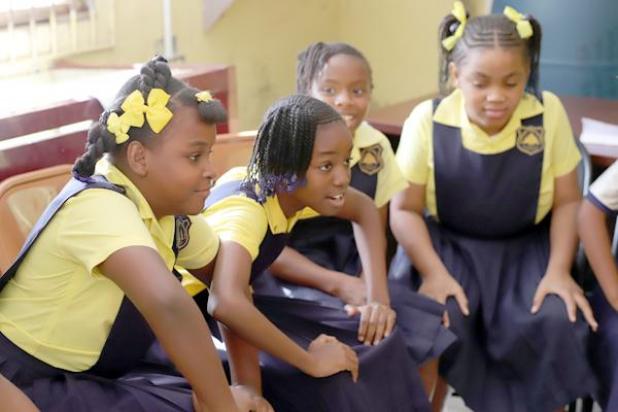 In fierce Bible quizzing competition, the first person to stand up gets to answer the question. A typical quiz looks much like this, with quizzers attentively listening to the questions and physically ready to jump up as soon as they’re ready to answer. The team pictured competed in the Youth Challenge 2018 Jamaican Bible quizzing tournament earlier this month. — Photo by Emily Malmkar | EMDesign 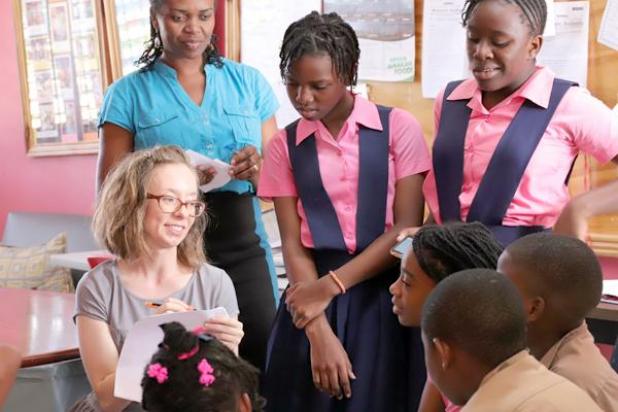 Frances Patterson, seated at left, works with the team of students from Coronaldi School in Montego Bay, Jamaica, while students from last year’s Bible quizzing team look on. Formerly of Dailey, Patterson now lives in Omaha, Nebraska, and has traveled to Jamaica with Youth Challenge nine times. — Photo by Emily Malmkar | EMDesign 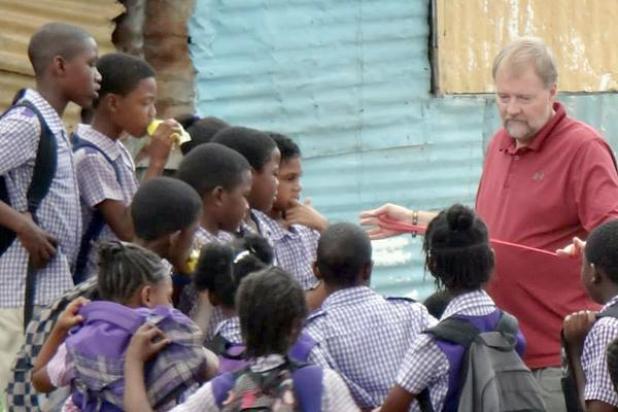 This particular photo was taken on a February 2014 trip to Jamaica, but such scenes are common, as Rick Cleaver, pictured at right, has served on close to 60 missions trips to Montego Bay with Youth Challenge.

How much of an impact can an experience in junior high have? What change can a single week in someone’s life make? In Rick Cleaver’s experience, the answer to both of those questions is more than you’d think — when God’s word is involved.
Cleaver first encountered Bible quizzing when he was just a teen himself, when he competed on the Front Range. Years later, both the Scripture that he committed to memory and the ministry that helped him memorize it are still a huge part of his life, as he continues to share with today’s students.
His impact radiates out from northeast Colorado, but his ministry has a second epicenter as well: Montego Bay, Jamaica. Cleaver is the executive director of the nondenominational youth ministry Youth Challenge, and since 1991 he’s made close to 60 trips to Jamaica for ministry there.
In a typical year, Cleaver travels to Jamaica to make preparations in October and then goes back in the following February with a team. In fact, he just recently returned from their 2018 trip. Cleaver’s first 10 years of ministry in Jamaica looked like a typical missions trip, with street evangelism and devotionals. In 2001, his trips began to focus on Bible quizzing instead.

What is Bible quizzing?
Bible quizzing consists of competitive tournaments in which quizzers answer questions about a set book or books in the Bible. To be successful in Bible quizzing, participants must memorize the verses they’ll be quizzed on, and that makes it a great asset in ministry.
“It’s a perfect discipling tool,” Cleaver said. “God tells us to meditate on his word, and you can’t meditate on his word if you don’t have it memorized.” He went on to explain that the things people spend the most time thinking about influence their actions. So if they’re spending their time studying the Bible, memorizing Scripture and thinking about God’s word, that’s going to have an effect.
For those reasons, Cleaver said, Bible quizzing is incorporated into every one of Youth Challenge’s ministries. It’s done during summer camps at Camp Machasay, in their prison ministry at Sterling Correctional Facility, through local quizzing teams and at the yearly Jamaican tournament.
Locally, the quizzing season  lasts from October through January, with practices weekly and tournaments monthly. Most participants are ages 11-19, and teams are coached by Youth Challenge staff, parents or former quizzers who volunteer their time. Since teams meet weekly for practice anyway, an environment for discipleship is created among the small groups.
There are opportunities for quizzers to compete at a regional and state level after the local season has finished, as well. This year’s material included 1 and 2 Corinthians; 1, 2 and 3 John; and Jude.
Since the Jamaican tournament happens after just one week of practice, a subset of the local material is used. In this year’s case, it was 1 John.

Quizzing spreads in Jamaica
When Cleaver was first approached about Bible quizzing in Jamaica in 2001, a principal there set up appointments with 11 schools in the Montego Bay area. After meeting with Cleaver, nine signed up for Bible quizzing. Over the years, Youth Challenge has had quizzing programs in 25 Jamaican schools.
Each February Cleaver assembles a team, usually 10-17 people, to go run the tournament. Some are students who currently quiz locally; others are former quizzers. Cleaver emphasized, however, that a volunteer doesn’t need to have any quizzing background at all.
Once in Jamaica, team members are assigned to particular schools that signed up to participate during Cleaver’s October trip. Team members help the fifth- and sixth-grade students study throughout the week, which culminates in the tournament on Friday. In addition to helping with memorization, the Youth Challenge team teaches theology and doctrine while there. In some kids’ cases, quizzing is really the only exposure to the Bible they get.
Teachers — or sometimes a principal or vice principal — coach the teams from their own schools, and Cleaver’s team runs the Friday tournament, acting as table officials. This year, 10 schools had a total of 12 teams compete.
The day of the tournament, Youth Challenge shares the gospel and extends an invitation to anyone who wants to receive Christ. Teams then split up for the round-robin format in the morning. Each site has three teams that compete against one another in two six-minute halves. Each team is allowed five seated members and two subs. After Youth Challenge provides lunch to all the quizzers, the eliminations begin. By the end of the tournament, three teams face off in the championship quiz.
Cleaver noted that his team sees many familiar faces from year to year. There are former Jamaican quizzers who go watch the tournament, visit with the Youth Challenge team and sometimes help coach, continuing the legacy just like Cleaver is. This year, he said, one former quizzer came to speak with him about starting Bible quizzing in their high school.
In another case, a school that competes in Bible quizzing decided to start their own Bible club. Now 100 students are active in the club year-round.
Two sets of the quizzing equipment were left with a pastor in Jamaica who was trained to use them. He’ll be hosting a tournament in April. That was always their goal, Cleaver said, to transfer the knowledge and equipment to local leaders who could continue to build upon Youth Challenge’s Bible quizzing ministry.
With the success of quizzing in the St. James Parish over the last 17 years, Youth Challenge would now like to start another Bible quizzing league there. The Upper St. James league will serve 11 rural schools in the area, and Cleaver intends to get it going when he returns to Jamaica this October.

Calculating the impact
It’s impossible to say just how many lives have been impacted by the Bible quizzing ministry in Jamaica. The fifth- and sixth-grade students who compete in the tournament are just the beginning. They take the Scripture and theology they’ve learned back into their everyday lives, sharing with family, friends, schools. Clubs are formed, teams created, and God’s word is spread.
On top of that, the individuals who make up the Youth Challenge team for the trip each year are affected. Cleaver explained that his purpose in taking students on these mission trips is to expose them to ministry. And when that’s happened, they take that experience into their own lives as well.
It’s with confidence that God’s word does not return void that Cleaver has continued using Bible quizzing as a ministry tool for all these years, knowing that having God’s word hidden in people’s hearts changes lives.