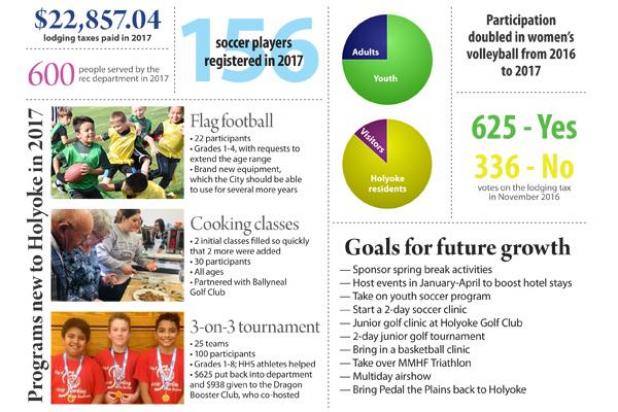 1 year with Holyoke rec: What has the lodging tax done?

On March 1, Victoria Timm passed the one-year mark as Holyoke’s recreation director. That’s one year of Holyoke’s 2.5 percent lodging tax being put to use in a new City department.
On Feb. 28, Timm, along with the recreation advisory committee, invited Holyoke’s hotel owners to a meeting to review what’s been done with the lodging tax in the department’s first year. They also discussed ideas for new activities and outlined concrete strategies to benefit the hotels and the community as a whole.
Referendum 2B, which established the lodging tax, passed by a 625-336 vote in the November 2016 election. As a result, hotel guests in Holyoke paid a total of $22,857.04 in local lodging taxes throughout 2017, partially funding the rec director position. Less than four years remain before voters will decide whether to extend the tax. The issue clearly didn’t have overwhelming support at the time of the first vote, but has the tax been worth it? You decide.

Rec department aids existing programs
With one year complete, it’s evident that the rec department functions in a number of different ways. In some instances, the director assumed steady responsibility over City programs that already existed. Think summer T-ball, machine pitch, softball and baseball.
Some of the department’s activities are local events hosted through the Colorado Parks and Recreation Association. Because of her membership in CPRA, Timm was able to host both the Rockies and Nuggets skills challenges. Membership also means Timm is part of a statewide network of rec directors, who share knowledge and ideas to improve one another’s departments.
Before the department was even established, supporters were clear that they did not want it to infringe on successful activities that other organizations have already established in Holyoke. That hasn’t, however, stopped Timm from working alongside such activities, offering what help she can. This has been seen in her presence and participation in the strength and balance exercise class at SunSet View, the FBLA career fair and the After Class Excellence program, to name a few.