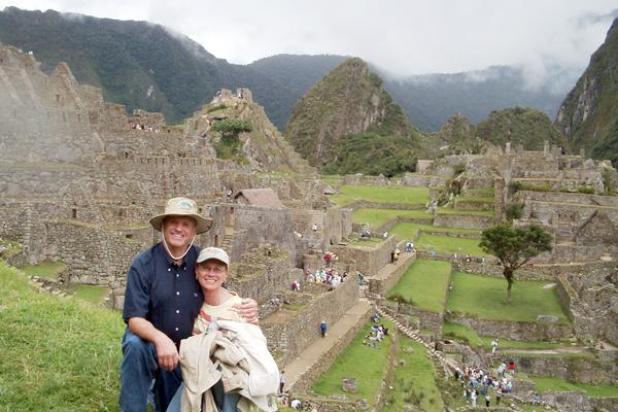 Carl and Kathy Schneller are anything but weary travelers. The Holyoke couple has traveled to roughly 85 countries and can’t wait to plan their next vacation. Here, they are pictured at Machu Picchu, the lost city of the Incas, in Peru. 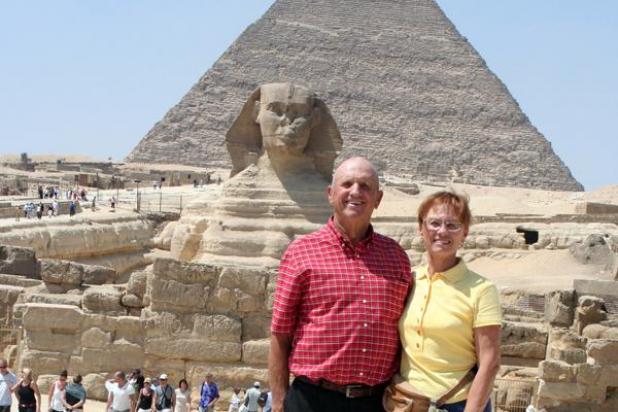 Carl and Kathy Schneller strike a pose at the Pyramids of Giza and the Great Sphinx near Cairo, Egypt.

Carl and Kathy Schneller, ages 81 and 76, of Holyoke, sat down for an interview about their travel tips and tricks. The article ran in Johnson Publication's Have the Time of Your Life section, published March 8, 2018.

1. How many countries and continents have you traveled to?
Carl: Around 85 countries.
Kathy: We haven’t hit Antarctica. We’ve talked about it. I don’t know why we haven’t been there yet.
Carl: We’ve been as far as the Falkland Islands, but that’s as close as we’ve gotten to Antarctica.

2. How many trips do you go on each year?
Carl: Three or four.

3. When did you start traveling?
Carl: We drove to Mexico with our family in about 1970. We made a big circle, and it took about two or three weeks.
Kathy: But we’ve done most of our traveling when Carl supposedly retired. That’s when we started taking big trips.
Carl: I retired from farming when I was 55. One of our first big trips was a three-week farm tour with Farm Journal in Australia and New Zealand in 1994.

4. Scheduling planes, buses, hotels, tours, etc. can be stressful. What’s your secret?
Kathy: He’s the one who likes to plan, and then I just say yes or no. It’s usually yes.
Carl: It’s relatively simple if you go on the internet. For getting airline tickets, I just go on all the sites and figure out which one will get me there most reasonably and the flight that I want. For trips, there’s one called vacationstogo.com. Everything’s on there. Even though we don’t book with them, we always look there. There’s another site called touringforless.com, and they’ll give you a big discount on anything they offer. We also have a travel agent in Florida who shares his commission with us, so it helps a little bit on the money end of it. These trips can get pretty expensive sometimes. If you can get a couple thousand bucks off, why not? And sometimes, the higher dollar tour and cruise companies aren’t that much different than the cheaper ones. Why spend a whole lot of money if you don’t need to?
Kathy: We like tours, cruise ships and river cruises. We like to stay with the better lines, but they’ll discount if you watch for deals. We don’t like the big ships that have 5,000 people. We usually go on the ones that have 600 or so. The nice thing about cruises is that they’re good about touching on things, whereas on tours you get the whole thing. But tours can be stressful because you’re usually in a different place every night.
Carl: On cruise ships, you unpack once, and that’s it!
Kathy: One of the best cruises we did was Alaska. Everyone says that’s the best one to do if you want to do a cruise.
Carl: I think that’s my favorite trip yet.
Kathy: The one I really liked was Iceland. You can see it all in a week — volcanos, waterfalls, icebergs, glaciers, geysers. In the U.S., we have it all, but you’d have to do a lot of traveling to see all those things.

5. Are you lay-on-the-beach-and-relax people? Or are you let’s-go-do-stuff people? How do you balance the two?
Kathy: We do both! We just see how we feel. Once a year we do the beach thing. We do a lot of walking while we’re there, but that’s our laid-back time to just enjoy it and take our time and not do any big things. We read a lot, and it’s wonderful! Lately we’ve been talking about how we need to do more road trips in the states. Two years ago we drove to eight national parks. We just used our phones to find a hotel when we decided where we wanted to stop for the night. It’s a lot different than the old days when you wanted to find a room when you got there, and when you got there there weren’t any rooms!

6. How do you decide where to go? What’s next on your bucket list?
Carl: l’m always looking. I’m always looking for a bargain, and I’m always looking for something interesting. I’ll see something that catches my eye, and I’ll print it off from the computer. I’ll lay it out here for Kathy to look at. If she’s interested — fine. If she’s not, she can throw it in the trash.
Kathy: It’s not so much looking for a bargain either. It’s looking for something interesting.
Carl: A bargain never hurts.
Kathy: For example, Carl wanted to go to China to see the terracotta soldiers — more so than the wall. Or when we went to Machu Picchu, he’d read about the ruins there and how they’re a new find compared to other ruins. That’s the kind of stuff he looks for.
Carl: I’ll tell you what I’m looking at now. I’ve been reading a book called “Elephant Company.” It’s about World War II when the Japanese when into Burma, and the elephants were so instrumental in driving the Japanese back out. Those elephants were almost like humans. They have a river cruise that goes down the main river that’s in the book, and I’d like to take a cruise on that river and just put that all together. A good book can sometimes make your curiosity wonder what in the world is out there.
Kathy: He’s the one who looks at things, and I just go along! Usually it’s the other way around. I think a lot of wives plan things and try to get their husbands to go. It’s the opposite with us.

The full article was published in the "Have the Time of Your Life" special section. Click here to read it online for FREE.