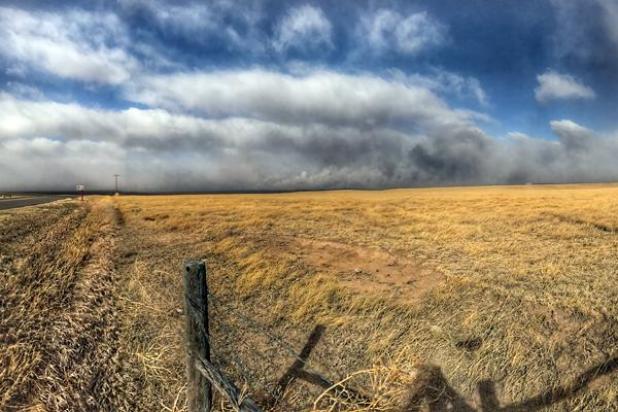 A grass fire that started in the Proctor area Monday morning, March 6, darkened the sky throughout the day, as high winds blowing smoke and dust reduced visibility. More than 70 firefighters responded from 13 fire departments Monday, with seven fire engines working through the night. Efforts to control the fire continued Tuesday. —Photo by Ryan Kanode

A large grass fire had the skies looking gray and local residents on high alert Monday, March 6. As of Tuesday, firefighters were still working to control the wildfire that has claimed several homes, outbuildings and livestock and over 30,000 acres.
A Tuesday noon report from the Logan County Office of Emergency Management noted that a red flag warning was to remain in effect until 5 p.m., with winds reported to be gusting from the northwest between 24-55 mph.
Haxtun schools closed at 11 a.m. and Holyoke schools at 12:35 p.m. Tuesday, when fire containment remained a concern.
A resolution signed by Logan County commissioners Tuesday morning declared a local emergency, which turns the incident over to the state of Colorado for the purpose of assistance and funding.
High winds that persisted throughout Monday made the fire particularly dangerous and difficult to fight. The Phillips County Emergency Notification System warned of gusts reaching 60-70 mph, and wind was blowing in the 30-40 mph range most of the afternoon.
Phillips County Sheriff Rob Urbach, Logan County Sheriff Brett Powell and Matt Branch from the Colorado Division of Fire Prevention and Control held an 8 a.m. press conference Tuesday at the Haxtun Community Center. Urbach noted that Monday the smoke was black and at times they had to wait for the wind to die down for a moment so they could move.
Monday, 70 firefighters from 13 fire departments responded from as far as the Front Range.
“You couldn’t see 2 feet in front of you, so you weren’t sure if you were in the smoke or at the fire,” Urbach said. “It was a hard situation, and the volunteer fire departments did a very great job.”
As the wind died down and temperatures dropped in the evening, the fire was 50 percent contained. Still, seven fire engines were out overnight, looking for hot spots and flare-ups.
Branch said the Tuesday strategy was to be mopping up the heat as much as possible while the winds were lower. Eighty firefighters were expected to be on scene Tuesday.
Local farmers were, and continue to be, invaluable in the efforts to fight the wildfire. Those northwest of Holyoke were asked to turn on their irrigation pivots Monday, and many had their tractors out, discing to prevent further spread of the fire.
Tuesday morning, farmers remained available with discs to assist.
North of Haxtun, Pam Adams and Jared and Sara Firme lost their homes. In total, three homes in Logan County and one home in Phillips County have confirmed structure damage.
During this time of hardship, Sara Firme said, “Thank you for all of the support and the outpouring of love. Thank you to the firefighters who have worked around the clock to save our community.”

Communities rally
In the typical show of support seen in rural communities, countless individuals and businesses have pitched in to help where they can.
Pages on gofundme.com have been set up for the victims, where thousands of dollars have already been donated.
Logan County Fairgrounds provided temporary shelter for horses, sheep and goats, and cattle had shelter at Sterling Livestock Commission. Individuals throughout Phillips and Logan counties offered their homes and land to those needing to evacuate.
Monetary donations for the victims are being accepted at the Haxtun Credit Union at 229 S. Colorado Ave., and other donations, such as furniture and clothing, can be donated at the former Smith Hardware building (Pro Till) at 125 S. Colorado Ave. in Haxtun.
Donations through Amazon may be sent to Haxtun Community Fire Relief in care of Hofmeister Insurance at 211 S. Colorado Ave., Haxtun, CO 80731.
A Facebook page called Haxtun Community Fire Relief has been set up to coordinate community assistance.
Meals are being arranged for approximately 300 people, and the Berean Bible Church in Haxtun reached out to First Christian Church of Holyoke to help gather necessary supplies. Churches in Haxtun are also providing places for firefighters to rest and sleep, with cots brought in by the Red Cross.
Colorado Farm Bureau is working on a relief effort for the fire victims, and Keith Sagehorn can be contacted at 970-854-3199 for more information.
Haxtun United Methodist Church’s thrift shop, Retread Threads, has already donated clothing to victims of the fire. Furthermore, they are having a March Madness Sale March 13-18, 9 a.m.-5 p.m., with proceeds to be donated to the victims. Retread Threads in located at 122 S. Colorado Ave. in Haxtun.
CHS Harvest for Hunger Cajun boil and mouse race have been rescheduled for March 13 at the Phillips County Event Center, and the proceeds will now be enhanced by CHS and donated to fire victims and Food Bank of the Rockies.

Fire starts near Proctor
The devastating fire began around 11:30 a.m. near Proctor, between Iliff and Crook, spreading southeast, near Fleming and toward Haxtun, before being contained.
Colorado Department of Transportation closed Interstate Highway 76 between Sterling and Crook Monday until 5 p.m. due to low visibility from smoke and dust being blown by the wind.
Colorado Highway 55 between I-76 and Fleming was closed from 11:30 a.m.-2 p.m., and Colorado Highway 59 was closed from I-76 to Haxtun Monday at 12:55 p.m. and again Tuesday morning at 7:30 a.m.
In total, three area schools were evacuated: Caliche, Fleming and Haxtun.
At approximately 3:30 p.m. Monday, the State Emergency Operations Center was activated to support the firefighting efforts, and the Division of Homeland Security and Emergency Management activated the State Resource Mobilization Plan in anticipation of resources needed to support the firefighting efforts.
No injuries have been reported, and Tuesday morning there were no evacuation notices. Urbach did not think Paoli or Holyoke were in danger. Branch is confident that they will get more containment on the fire as they continue to work Tuesday.