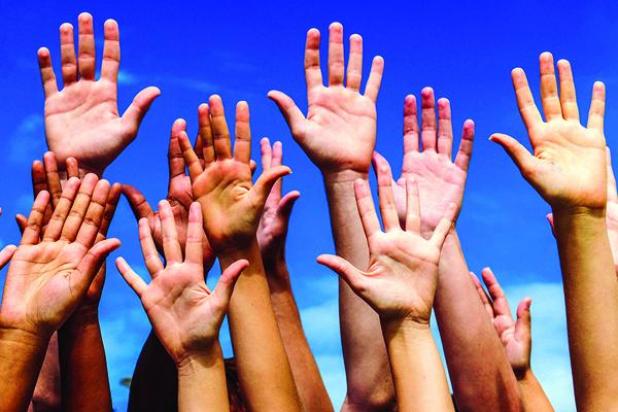 6 observations based on 6 young board members

“I’ve been on the ______ board for______ years! When will someone new step up and take my place?”
Fill in the blanks, and you’ll have a refrain uttered often around Holyoke. The vast majority of board members in the area are people of a certain age, and many are worried about whether younger people will ever start stepping in.
The Enterprise spoke with six of Holyoke’s own young adults, ranging from 25-31 years old, who are currently serving on local boards.
What follows are six informal observations about their experiences, coupled with something to think about regarding the plight of aging boards.

1. PASSION
Based on the experiences of the six young board members, one of the biggest factors in their joining is passion.
For Kayla Knight, her love of art and music began when she was young and it was encouraged by her father, who enjoyed DJing for fun. In school she loved choir and attended arts council concerts even then. After she moved back to Holyoke as an adult, Knight was at a Michael Bublé tribute concert put on by the Phillips County Arts Council last year. It was a phenomenal show, but when Knight looked around and saw all the empty seats, it compelled her to ask about joining. Becoming a member of the PCAC board was a way to keep the arts she cares so much about alive within her community.
Similarly, people who volunteer on the library board tend to be readers who utilize Heginbotham Library themselves. Those on the fair board typically have first-hand connections to agriculture and are often former 4-H or FFA members with a long history of participation in the county fair — whether Phillips County’s or another’s.
Something to think about: As Heather Linne-Speidel speculated, “When something means something to you, maybe you’re more willing to get involved.” A personal impact seems to make people more likely to participate, but she also pointed out that what many people don’t realize is that everything impacts them in some way. Maybe that’s part of the reason more young people aren’t on boards for such things as the hospital or the cemetery. Perhaps it takes a certain amount of life experience to see how those things affect everyone’s lives.

2. EXPERIENCE
Many of the younger board members reported a certain level of anxiousness when they first began. After all, they were joining people with more experience — in life and in board service. But something else most have in common is that they were involved in organizations and held leadership roles even as kids.
held leadership roles even as kids.
Briar Bergner, for one, explained that she got her first taste of leadership when she was in 4-H. “I was pledge leader as a Cloverbud,” she joked. Throughout her teen years, she held essentially every office that existed in 4-H — reporter, historian, secretary, treasurer, vice president, president — at one time or another. It’s where she first learned how a meeting was run, getting acquainted with the basics of parliamentary procedure before she even knew what it was.
In high school, Kayla Kafka was heavily involved in Future Business Leaders of America, taking on several leadership roles. She began as a chapter officer and moved on to being a district officer before eventually serving  on the state level.
While lack of experience can make joining a board seem daunting, it appears that having some basic experience as a child, teen or college student primes young adults to more readily step into the board member role.
Something to think about: Even in high school, student government is often made up of the same handful of people each year. How might the community look different in the future if there were more variety in leadership among students?

3. JUST ASK
The discussion about young people volunteering for boards is usually framed as a question of why they aren’t willing to step up. After speaking with some of those who are currently serving, though, many said they weren’t even aware that it was an option before they were asked to consider joining.
Linne-Speidel said that she had lived in Holyoke for just seven months before she was asked if she would serve on the library board. Had she never been asked, she likely would have never realized it was even an option. As it was, she went to the library weekly as a new resident. She got to know the librarian, who then recommended her to the board. Now in her second year, she’s serving as secretary and actively supporting a place she loves, all because someone asked.
Diana Baeza, who is an employee at Melissa Memorial Hospital, knew about the goals and efforts of the Melissa Memorial Hospital Foundation board because of her job. Could she have learned about the MMHF if she didn’t work at the hospital? Certainly — but she’d have to hear about it from someone. What are boards doing to make sure the community knows they exist?
Something to think about: Maybe that’s why the Phillips County Fair board has become one of the few “young” boards within the area. With kids being involved in the fair for years, the existing board members and county commissioners know exactly where to look for new recruits. It’s probably significantly harder to readily find a group of young people to approach about, say, the housing authority or the weed and pest board.

4. ROLE MODELS
Several of the area’s young board members told of their parents’ involvement in the community. Some flat-out said it was where they came to see the importance of serving.
In Kafka’s case, her parents’ influence is especially clear. Throughout her childhood, her parents (Steve and Kim Young) were constantly involved with boards, committees and volunteering. She and her siblings were raised with the understanding that it’s simply what someone does to make the best of their community.
In particular, her father’s being active in the Phillips County Republican Party paved the way for her eventually being secretary/treasurer for the Phillips County Republican Central Committee. When Kafka was in high school, her father was already active, and she started to go along with him once she could vote herself. She saw him serve as a precinct chair and later the chairperson of the local Republican Party. Kafka explained that she had knowledge about caucuses and county and state assemblies from school, but having someone she knew to tag along with made a big difference.
Bergner was another who emphasized the importance of her mother’s example. She described her mother, Gloria Bergner, as a lighthearted influence on the boards she served on, noting that she wants to do the same.
Something to think about: For people who have children at home — or even mentees in other areas — consider the example you’re setting for them. Though just 27 years old herself, Baeza is already thinking about it. “Our generation is responsible to set an example for the younger generations about the value of our community and its organizations,” she said.

5. NON-NATIVES
As one of the current young board members pointed out, there can be something of an assumption that to make a difference locally, one must have been born and raised here. It can seem like only the older, more well-connected people have the ability to make an impact or effect change.
Several of the current young board members in the area are, in fact, Holyoke natives and HHS graduates. Some do want to give back specifically to the community and organizations that they benefited from as children. That’s not everyone’s story, though.
Despite being a Peetz High School graduate himself, Justin Clevenger sees the value of serving in Holyoke. For one, being on a board is a way for someone new to the area to meet people. Likewise, Linne-Speidel, when she was new to town and didn’t know many people, found that serving on the board was a way to get to know others who share her interest.
Clevenger also pointed out that being a board member is a way to get to know the community as a whole, seeing what is valued through the organizations and the causes they support.
Something to think about: Maybe it’s easier to think of the local students who volunteered and held leadership positions in their youth or who come from families that are known to value community service, but boards may unintentionally do themselves a disservice if they fail to look beyond the people they already know.

6. SYMBIOSIS
It’s often said that local organizations need young people to step up and serve on their boards. There’s no doubt that young people bring something to the table. What doesn’t come up nearly as often, however, are the ways being on a board is beneficial to the young people who serve.
Without exception, the board members interviewed agreed that service is a two-way street. Baeza noted, “The younger and older generations can learn from each other,” pointing out that younger people bring innovation and new ideas. Linne-Speidel had a similar perspective, pointing out that newer recruits can often take a fresh look at areas in which long-time board members default to “the way things have always been done.” She also pointed out that having young, new people on a board often means that questions are being asked that otherwise wouldn’t.
While Kafka also believes young people can bring new ideas and perspectives, she emphasized that they should listen to the more experienced board members, taking time to understand why things are done the way they are.
For Knight, she learns from fellow board members who have professional experience in art and music. With her passion to reach the younger demographic, she happily takes on social media responsibilities, a duty many older volunteers happily delegate to someone else.
“I bring different things to the board because I’m in a generation that thinks a little differently, but we all have the same goals in mind,” Bergner summarized. She also noted that getting a foot in the door on a board opens up opportunities for an individual’s growth.
Even at the risk of upsetting the status quo, making waves or appearing aggressive, Linne-Speidel noted how important it is for young people to speak up. The decisions made as a board member do impact other people, she said.
And these board members recognize the need for more people like themselves to step up. As Clevenger said, “Small communities need leaders that can wear multiple hats and who are willing to step out of their comfort zone. It’s hard at first, or at least it was for me, but it’s very fulfilling to serve if you are willing to stick with it.”