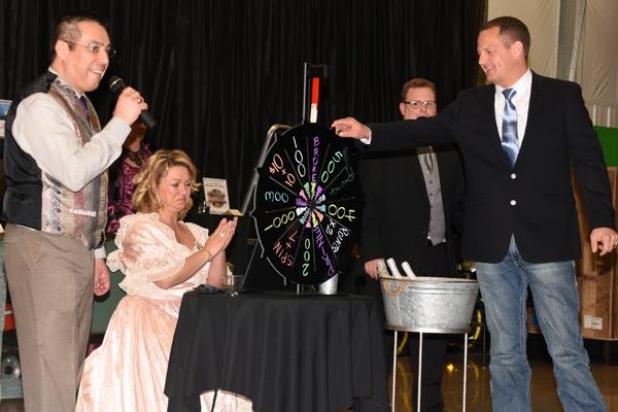 Adding $7,800 to the evening’s fundraising total, Spinning on the Bayou was a new game at this year’s Legacy Event. Six chances to play the game were auctioned off, and the six winning bidders sent designated “spinners” to the front of the room to play. Cheered on by his team, Brady Dirks spins the wheel, while Melissa Memorial Hospital Foundation board members Jessie Ruiz Jr., Tiffany Weber and Brady Ring, pictured from left, wait to see his fate. — The Holyoke Enterprise | Johnson Publications 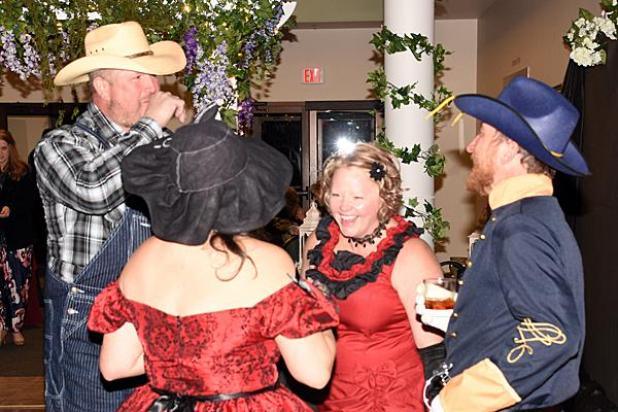 Cancer, unfortunately, is something that affects just about everyone in some way or another. Perhaps that’s part of the reason the ninth annual Legacy Event saw such profound success. More tickets were sold, auction items donated and dollars raised than in previous years, and the tone of the entire event was shaped by appreciation for one woman.
Londa Bradford, who died of multiple myeloma in 2015, was honored by her family, friends and community at the Feb. 9 Melissa Memorial Hospital Foundation fundraiser. Driven by a love for his sister and a desire to see her remembered, Ty Wernet and his wife Patty donated $75,000 to MMH for its chemotherapy project.
The project was also designated as the main recipient of the funds raised by this year’s Legacy Event, which grossed $142,836.
Money from the Legacy Event will be added to the gift from the Wernets, going toward necessary updates to the hospital’s chemotherapy mixing room for MMH to begin offering the service locally again. The completed room will be called the Londa Wernet Bradford Cancer Center.
“It’s just an amazing gift,” said MMHF executive director Nancy Colglazier. “We are honored — humbled — that we get to be a small part of this.”
Though Ty and Patty, who live in Marysville, Washington, could not be at Phillips County Event Center for the event itself, Colglazier read a moving letter from Ty.
“We have direct knowledge of the difficulties facing a cancer patient in northeastern Colorado,” the letter read. “We took [Londa] on one of her many long trips for treatment and witnessed how exhausting it was.”
After Ty received treatment from Jessica Skomp for “big pneumonia” at MMH 2 1/2 years ago, he was impressed by the phenomenal care, kindness and follow-up he received. He and Patty decided then to invest more in MMH. After learning about the hospital’s chemotherapy project last year, they realized that purchasing the naming rights would be a fitting way to show their gratitude for MMH, honor Londa and provide increased local care for others like her.
Londa’s husband, Brad Bradford, spoke to Legacy Event guests as well, and several tables full of Wernets, Bradfords and family friends were a touching tribute to a woman who certainly wouldn’t have expected so much to be done in her memory.
A slideshow featuring photos of Londa with her loved ones throughout the years gave everyone a chance to reflect on her life and the difference that the gift given in her name will make in others’.
Colglazier believes that helping the hospital bring chemotherapy to the people of Holyoke is one of the best ways the Foundation can serve the community. She emphasized that the project won’t touch the chemo patients alone but will also impact caregivers, husbands, wives, friends — people that won’t have to take a sick loved one on the road to receive treatment during an already difficult time.
Each year since 2011, the Foundation has hosted the Legacy Event as its annual fundraiser, and as Colglazier said, “It’s only getting better.” Surpassing the $100,000 mark last year was a grand milestone, and MMHF board members didn’t know if this year’s efforts would measure up. Well the $142,836 raised last weekend greatly surpassed that previous record, and the board was “totally blown away.”
This year, 44 tables were purchased, meaning about 375 guests were in attendance. That’s over 100 more than in 2018. The theme of the evening was Southern Charm, and everything from decor to the menu was meant to transport guests to the South for the night.
Following social hour and dinner, as well as the tribute to Londa, an auction provided another opportunity for guests to support the hospital financially.
Silent auction items were on display throughout the evening for people to bid on. With 87 items donated by generous businesses and individuals, it contributed $9,647 toward the total amount raised. The live auction brought in $47,700, as 42 items were purchased.
In what’s becoming a tradition, the auction included one special item to be purchased for the hospital. This year, a MedSafe Medication Disposal System was purchased. It will be located in the waiting room at Family Practice of Holyoke, and individuals can safely dispose of their unneeded medications there during business hours.
The last thing on the list to be auctioned off were six spots in the evening’s game, Spinning on the Bayou, which was new this year.
A vacation was also raffled off as part of the event. A total of 400 tickets were sold, and Megan Hensley won a trip to her choice of New York City, the Dominican Republic or Savannah, Georgia. At the end of a successful fundraiser, guests enjoyed dancing and more socializing until the event was over.
As usual, the staff from Melissa Memorial Hospital made the event possible. They, along with their family members and volunteers from the Thrashers Softball Club, helped serve dinner to the evening’s guests. The meal was catered by Outback Cookin’ and Catering. All said, it took the efforts of over 60 people to prepare and serve dinner. Members of the Holyoke chapter of FFA helped with cleanup on Sunday after the event was finished.
While the majority of the funds raised at the Legacy Event will go to the chemotherapy project, each year a portion of the money goes to medical scholarships and MMHF operations.