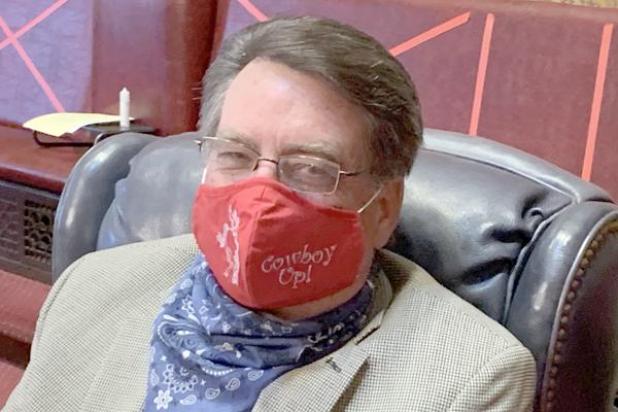 After a 10-week hiatus due to COVID-19, lawmakers are back at the state Capitol, and some, like Sen. Jerry Sonnenberg of Sterling, are wearing masks. — Marianne Goodland

Budget debate delayed due to protesters, vandalism at state Capitol

The Colorado General Assembly returned after a 10-week hiatus to do the one thing they’re required to do every year by the state Constitution: pass a balanced state budget.

It got off to a somewhat slow start.

After putting the Long Appropriations Bill for 2020-21, as the state budget is known, in front of lawmakers on Tuesday, May 26, the process got waylaid by protesters Thursday night, May 28, mostly white.

That caused Democratic leaders to cancel Friday’s session, May 29, the day the House was scheduled to begin debate on the budget. That process resumed this week, and the budget should be wrapped up by week’s end.

Then it’s on to the School Finance Act and bills dealing with the COVID-19 pandemic.

The protesters were a small portion of the more than a thousand who gathered at the Capitol in Denver for four days to protest the death of George Floyd, a black man who died after a Minneapolis, Minnesota, police officer put his knee on Floyd’s neck for nearly nine minutes.

In one of the most dramatic moments, more than a thousand people lay on the lawn of the state Capitol, in Lincoln Park and on Lincoln Street, some lying in broken glass. For nine minutes, they lay on their stomachs, hands behind their backs in a handcuff position, and chanted, “I can’t breathe,” reportedly Floyd’s last words before he died.

During the four days, the exterior of the state Capitol was badly damaged with graffiti and broken windows and statues, including those saluting a Hispanic Medal of Honor winner and a Civil War statue on the Capitol grounds.

Police responded with tear gas, rubber bullets and pepper balls, shooting at both protesters and the journalists who were covering the event.

The protesters have returned each day to clean up the mess left behind.

In the session’s remaining weeks, in addition to the budget, lawmakers are also expected to clear the agenda of measures that won’t pass, either because of cost or because they don’t fit within the priorities laid out by Democratic leaders.