These large wood buttons are displayed on one of 100 panels in Mary Brunken’s button collection at the Phillips County Museum. — The Holyoke Enterprise | Johnson Publications 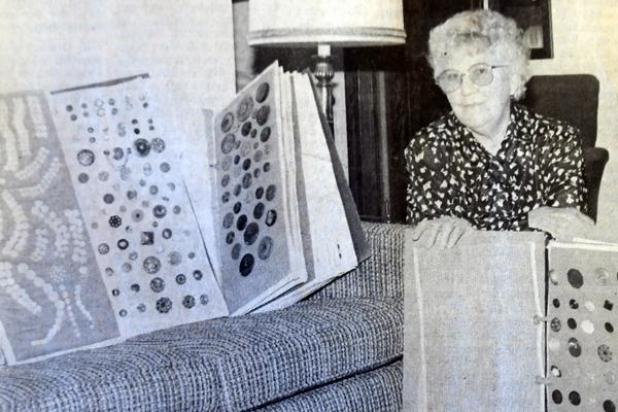 Mary Brunken is interviewed by the Enterprise in 1989, the year before she donated her collection of over 12,000 buttons in 12 custom books to the Phillips County Museum.

Mariann Landes shows off two steamer trunks full of interesting buttons, as well as two button collecting books, which were all passed down from her great-aunt. — The Holyoke Enterprise | Johnson Publications

Out of all the buttons in her collection, this skull is a favorite of Mariann Landes’. — The Holyoke Enterprise | Johnson Publications

Button, button, who’s got the button?

Editor’s Note: This is part of a series about local residents and their unique collections.

Long before we were clicking buttons on our computers and smartphones, we were using buttons to secure clothing, flaunt wealth and embellish fashion statements.

The use of buttons for thousands of years has threaded them deep into the fabric of humankind’s history. And yet, they are so commonplace that you may have used a button today without even noticing it.

But if you take the time to dig out that button box that you’ve stashed away with leftover craft ideas from a grandmother, buttons waiting to be mended or treasures snatched from an auction, you’ll find that each button has a different story to tell. When you run your fingers through the rainbow of plastic, glass, metal, wood and more, you’ll find that each button is unique.

Many of us are button collectors, to a certain degree; however, two button collections in particular are so riveting and so remarkable they’ll make you stop and say, “Well, bust my buttons!”

Kids often want to start their own collections, whether its baseball cards, stickers or keychains. As a 12-year-old girl, Mariann Landes inherited a collection that would be the envy of both kids and adults.

Back when beer can collecting was in its heyday, Landes’ sister had one, and Landes found herself whining about not having a collection to call her own. Hearing her distress, Great-aunt Ada Wright came to Landes’ rescue.

Landes became the proud owner of two steamer trunks full of old buttons. “They are now yours,” Wright told her as she handed them over.

Hundreds of buttons had been sewn onto dozens of cardboard rectangles, with some handwritten notes scattered here and there to highlight the age, material or use for individual buttons or groups of buttons.

They came in all shapes, sizes and varieties, ranging from old underwear buttons to fasteners for spats, a classic footwear accessory that covered the ankle. Landes pointed out that the collection even includes perfume buttons with fabric upon which women could put a couple drops of perfume to avoid risking the stain of their clothing.

With all those buttons to choose from, Landes decidedly said her favorite is an ivory-colored button in the shape of a skull, complete with ruby-colored eyes, which dates back well over a century.

Included in the trunks were two books for button collectors: “Button Parade” and “Button Classics.”

Without knowing how valuable the buttons are, Landes said at one point in her youth someone tried to buy the collection, but her mom declined, saying they’ll be worth more someday.

Landes has not added to the collection, but she has kept the buttons with her all these years. Thinking it may be time to pass on the legacy to someone else, Landes has been keeping her eyes open for anyone who would like to purchase the collection.

Some people never want to throw things away, and Mary Brunken admitted she was one of those people. In an article in a 1989 edition of The Enterprise, Brunken explained how she’d been gathering buttons over her lifetime, but she didn’t consider herself to be a collector until she began organizing them in the mid-1980s.

Her collection was donated to the Phillips County Museum in 1990, and if you’re interested in looking at it, make sure you pencil in plenty of time in your schedule.

A grand total of 12,258 buttons are neatly sewn on to 100 homemade fabric panels in a dozen different books. While a number of buttons are displayed in pairs, there are 10,411 unique buttons in the collection.

Brunken credited family and friends who donated from their own button boxes to add to the treasures found at secondhand stores, auctions and garage sales. She also received an interesting collection from her sister-in-law Frances Sines White.

“I just thought it was unique how she organized it,” said Brunken’s daughter Rita Kleve. Brunken spent hours dividing the buttons by color, material and size and sewed them onto the panels in a variety of interesting arrangements, such as faces and curves.

A small booklet at the museum guides visitors through the panels, highlighting military buttons, painted designs, family crests, fancy shanks, overalls buckles, round-top buttons, sparkly ones and much, much more. The largest measures 2.5 inches in diameter, and the smallest is about an eighth of an inch across.

With millions of button designs in the world, who knew thousands of them were right here in Holyoke? Step aside, zippers, snaps and Velcro, the fasten-ating world of buttons is here to stay.