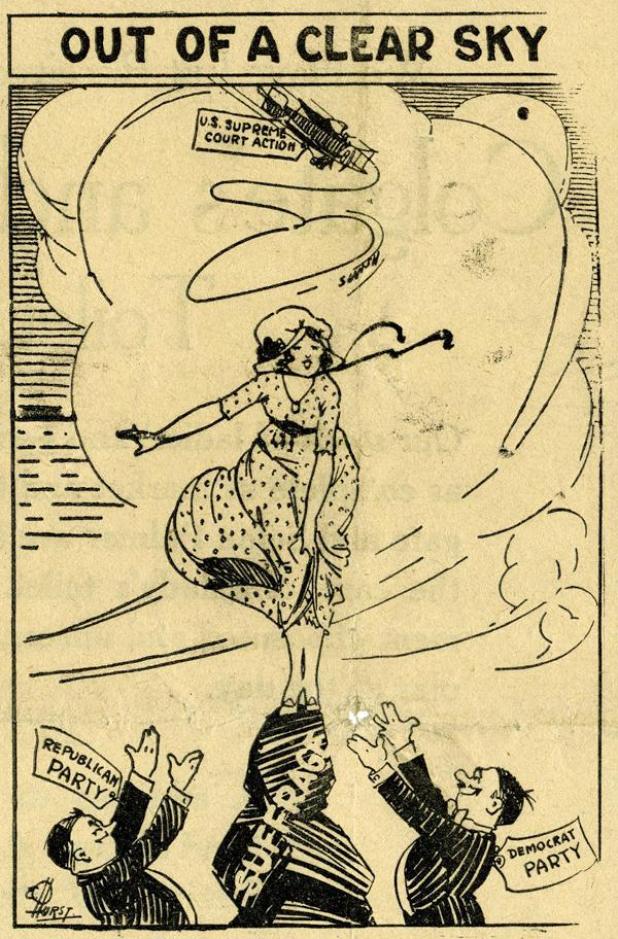 A July 16, 1920, cartoon in The Holyoke Enterprise captures the nation’s attitude about the women’s suffrage movement. In little more than a month’s time, women over the age of 21 in the U.S. would have the right to vote.

A century with women’s right to vote: ­Remembering the 19th Amendment­­

As the nation approaches the 100th anniversary of the ratification of the 19th Amendment, it is important to remember its advocates and reflect on its implications, many of which can still be felt today.

The 19th Amendment was officially ratified on Aug. 18, 1920. The Amendment declares that “the right of citizens of the United States to vote shall not be denied or abridged by the United States or by any State on account of sex,” and allowed more than 8 million women to make their voices heard by voting in the presidential election of 1920. The Holyoke Enterprise article of Nov. 5, 1920, noted that the “millions of women’s ballots also swelled the popular vote recorded beyond all records.”

Voting is a cornerstone of democracy, but access to the ballot was not always universal.

The right to vote was something the nation grappled with since its founding. In a letter dated March 31, 1776, Abigail Adams, wife of the second U.S. President, John Adams, wrote to her husband regarding the new nation’s laws and urged him to “remember the ladies” and to “not put such unlimited power into the hands of the husbands.”

Despite the future First Lady’s request, it would take nearly a century and a half for voting rights to be extended to the women of the United States.

It would require the hard work and determination of many women and their allies to make universal suffrage a reality.

One of the major foundations of women’s suffrage in the United States was the Seneca Falls Convention of July 1848. Three hundred attendees arrived to show their support for the cause. Organizers Elizabeth Cady Stanton and Lucretia Mott were instrumental in developing the “Declaration of Sentiments,” which outlined the movement’s goals and called for women’s constitutional right to equality as citizens of the United States.

After the Seneca Falls Convention, Cady Stanton met another suffrage advocate, Susan B. Anthony, in the early 1850s. Together they established the weekly publication The Revolution, which advocated for women’s rights. They also founded the National Woman Suffrage Association in 1869, which merged with another suffrage organization in 1890 and became the National American Woman Suffrage Association.

Proponents of women’s suffrage continued to lobby on behalf of women and call for a constitutional amendment to guarantee voting rights through the turn of the 20th century. The NAWSA also implemented a state-by-state strategy, and by 1918, 16 states and the Territory of Alaska had granted women the right to vote.

By 1918, attention was again on a proposed constitutional amendment. President Woodrow Wilson, who had initially been opposed to extending the vote to women, now saw the amendment as “vitally essential to the successful prosecution” of World War I. Despite his support, the proposed amendment failed by two votes in the U.S. Senate.

It was not until May of 1919 that the amendment passed in the U.S. House of Representatives. The Senate then passed the proposed amendment in June of that same year. It was now up to at least three-fourths of the states to ratify the amendment.

Tennessee became the 36th state to ratify the amendment on Aug. 18, 1920, and it was officially certified as the law of the land on Aug. 26, 1920, granting women 21 and older the right to vote in the United States.

The impact of the 19th Amendment cannot easily be quantified. It paved the way for statutes like Title IX, which protects people from discrimination based on sex in education programs or activities that receive federal financial assistance. In many ways, women’s suffrage was not the end of a movement, but it marked the beginning of an ongoing mission to make sure the government recognizes the value of all citizens’ opinions, needs and hopes.