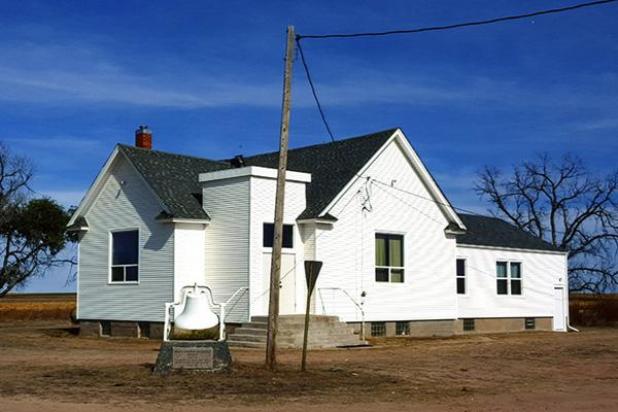 Wages Church is pictured about one year ago. 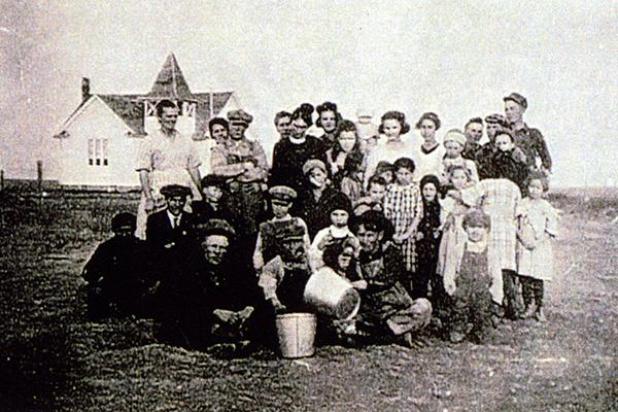 Students gather at Wages’ last day of school in May 1921 with the Methodist church in the background.

The bell will ring at the Wages church south of Paoli in Yuma County on Sunday, Oct. 15, as it celebrates 100 years.
The service will begin at 10:30 a.m., delivered by Richard VanWinkle of Dallas, Texas, a former minister of the church from 1973-1976.
Lunch will be provided at noon, followed by a special program full of music and memories. Visitors will be delighted with violin, piano and organ music as well as stories from the church’s 100-year history.
Dedicated March 19, 1916, the church is past due for its 100th anniversary. Frank and Janis Salvador have kept the church alive after the Methodists voted to close it in 1990 due to dwindling numbers.
Salvador said he started keeping the church up and people started coming. Today, nondenominational services are held Tuesday nights, and the church is open for weddings and funeral services. With Salvador playing piano and Althea Riley on the organ, concerts are performed at the church twice a year, attracting 75-100 people.
At one time Wages was a small town consisting of a post office, school, store and the church. Wages was named for the first postmaster, Middleton Wages.
The school was built in 1910, and in 1911 a minister from Holyoke held meetings in the schoolhouse. Since many of the families in the area were Methodists, plans were made to build a church.
Salvador’s grandfather, Frank N. Salvador, owned the land where the church is built and in 1915 granted a deed to the church. It was constructed that year, and services began in 1916.
A stipulation came with the donated ground — when the church ceased to operate as a Methodist church, the land would go back to the landowner, Salvador explained. He purchased the land from his grandfather’s estate in 1962.
In 1917 the bell was given through the generosity of Salvador’s grandfather and Sheridan O’Neal, as well as other church supporters.
Salvador remembers ringing the bell when he was a boy. At some point, maybe around 1950, the parishioners decided the steeple was not sturdy enough to hold the bell, he said. It was removed from the steeple and placed on a pedestal in front of the church where it still stands today.
The Wages store, built in 1916, was a place for farmers to sell eggs, cream and butter. Nearly everything the farmers needed could be purchased at the store, and it was a good place to visit with neighbors.
A new schoolhouse was built in 1940 and was used until school consolidation took place during the early 1960s. The schoolhouse was then moved as an addition to the church. Both the store and the post office were discontinued in 1946.
Today all that remains of the little town of Wages is the church. It was always a very active church, with more than 100 members at one time, and continues to serve people today.
Salvador noted that the heating and air conditioning was replaced in 1991. Other improvements have been made in the past couple of years, including new siding and windows, a new kitchen in the basement, new carpet and a new piano.
The Salvadors ask those who attend to bring a recipe to share as they are compiling a Wages Church cookbook to be used as a fundraising project for the church.
The church is located at 58322 County Road V, 14 miles south and 1 mile east of Paoli in Yuma County. For more information on the celebration, contact Salvador at 970-774-7476.