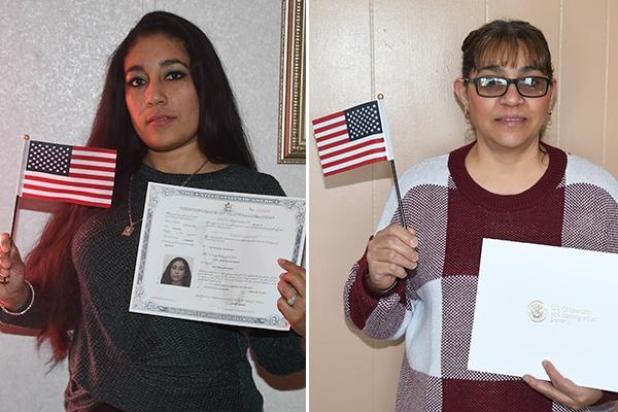 Lily Magana Velazquez, at left, became a U.S. citizen Feb. 4. She is pictured with her certificate of naturalization, and she said she is very happy with what she has achieved. She said she had a feeling of accomplishment after all the studying and the hard work she put into becoming an American citizen. Lorena Bencomo is also pictured with her certificate of naturalization. She became an American citizen Jan. 7. She said it has been a goal of hers ever since she came to the U.S., and she is thankful to the instructors at Phillips County Family Education Services and all the people who helped her during the process. — The Holyoke Enterprise | Johnson Publications

Do you know what the words “E pluribus unum” mean? Can you name what constitutional amendment gives citizenship to all people born in the United States? What about describing the purpose of the 10th Amendment?

These are just a few of the civics questions that can be asked during the interview to become a naturalized U.S. citizen.

According to U.S. Citizenship and Immigration Services, the civics test is an oral test in which the USCIS officer will ask the applicant 20 from the list of 128 possible civics test questions. At least 12 questions must be answered correctly to pass the 2020 version of the civics test.

For the English portion of the naturalization test, an applicant must demonstrate an understanding of basic English, including the ability to read, write and speak it.

Citizenship prep classes are being offered at Phillips County Family Education Services to get people ready to go through the naturalization process successfully. The sessions are 13 weeks long, and classes are on Tuesdays from 7-8 p.m.

Yesenia Bencomo and Cecilia Marquez teach ESL at Holyoke Elementary School, and they are also instructors for the citizenship prep classes at PCFES. Jesus Jimenez has also recently joined as an instructor.

The classes are free, and Bencomo said the instructors work with students on the 128 civics questions from USCIS, as well as reading and writing basic sentences in English. Students receive packets with the necessary materials from the USCIS website, and the civics questions are taught with an eye toward adding context to the key concepts.

Marquez said the categories of civics, reading and writing  can blend together, with concepts covered in one section applying to the others. She said USCIS provides a list of vocabulary words that include holidays, historic events, past presidents and government information. The classes are conducted in English, and Marquez said the use of a student’s native language is only as a last resort.

Bencomo said two of the three instructors go to each class on a rotation to get students used to different approaches and methods. “We try to diversify it so they can be ready for anything and everything,” she said.

Along those lines, they also ask other community members to come to the class to conduct mock interviews with the students to prepare them for the actual naturalization interview. During the mock interview, 12 civics questions from the group of 128 are asked, with the goal of the student getting at least six right. The student is then asked to read a sentence and write a sentence in English using the vocabulary words they studied.

Bencomo and Marquez said the interview process really starts as soon as the student walks through the door, and the reason they use community members who have not been part of the class for the mock interview is to get the students used to going through the process with someone they might not know as well as they know the instructors.

Bencomo said the class is open to all, but the focus is on those who are within one to three years of applying for U.S. citizenship.

“We can be their biggest cheerleaders,” Bencomo said. “I think that says a lot for being in a community where you can do that.”

She said she appreciates being part of an organization like PCFES that takes the time to encourage people, since the process to become a naturalized citizen is not easy.

“Just knowing you can be a small piece of the puzzle is amazing,” Bencomo continued. She added that she feels it’s important for people to help others when they can, especially in difficult times.

“The students are ready and serious,” she said. “You’re teaching a group of people that want to be there. It’s an investment in themselves and their families, so they work for it.”

Marquez acknowledged that it’s a pleasure to work with PCFES and said it’s very rewarding for her to be able to make a difference and to have a positive impact. She said while every situation is different, achieving U.S. citizenship is a milestone that really opens doors for families.

“I went through the process myself, and I know how hard it can be without a support system,” she said. “We all just want to help and be that support system for them. They truly do all the work, and we facilitate and provide support,” she said.

Jimenez also completed the citizenship process years ago without the assistance of a prep course.

“I see the students motivated and excited to have someone there to help them,” he said.

Those interested in the citizenship prep course should call PCFES at 970-854-2595 or send them a message on Facebook.

Lorena Bencomo and Lily Magana Velazquez have completed the naturalization process and became U.S. citizens this year. Bencomo became a citizen Jan. 7 and Velazquez on Feb. 4.

Bencomo said that she has wanted to become an American citizen ever since she came to the U.S.

“After 23 years,” she said, “I finally did it. Ever since I passed the test, I have felt free and safe.”

She continued by saying she wants to thank the instructors, PCFES and all the people who helped her study the questions to help her achieve her goal.

“I studied hard, and the teachers and people at FES helped me a lot,” she said, adding that she also watched YouTube videos and used flash cards on her own to prepare.

She said she felt nervous during the process but trusted herself and the preparation she’d had.

She had a great feeling of happiness after completing the process and taking her oath of allegiance.

Velazquez said she began to study on her own after classes were interrupted by the COVID-19 pandemic. She studied whenever she could and returned to the citizenship prep course before her actual interview for more practice.

“I’m very happy with what I achieved,” she said. “For me, it was something wonderful. I studied all the questions very hard, and when they said ‘Congratulations, you passed,’ I felt very happy.” She added that she completed her oath right away, which she said was an emotional moment and that she had a feeling of accomplishment.

She continued, saying there was something wonderful about taking the oath. Her husband Ernesto Alejandre was waiting for her in their truck outside, and Velazquez said she was very happy to share the moment with him with a hug after she showed him her certificate.