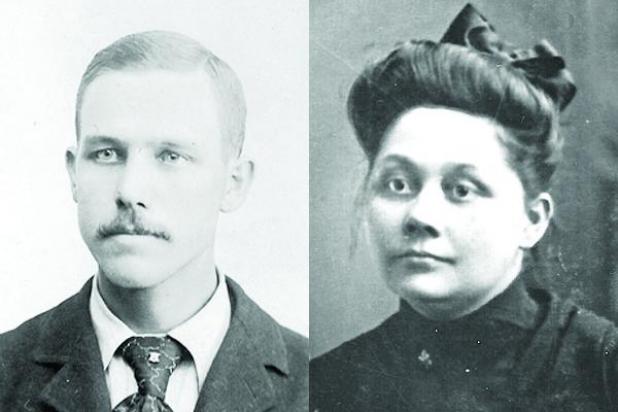 June 17, 1900 — October 3, 1900
To Charles Peter and Ida Wishart, those dates marked the final months of their nine-year courtship.
To their descendants, it’s the short time frame covered in a stack of old letters passed down through generations.
To the people of northeast Colorado, it’s a small window that affords a glimpse into what life was like in Holyoke over a century ago.

Holyoke Colo. 6/17 - 00
Dear Ida,
It affords me great pleasure to answer your esteemed favor of 6/10, which I received yesterday. This is quite a slow way of making known our thoughts and no doubt our thoughts will be greatly multiplied  in the future. Of course, some of these thoughts cannot be expressed on paper but there will be a plenty that can...

The earliest of her great-grandfather Charles Peter’s letters that Joanie Groshans has access to was written June 17, 1900, to his fiance, Ida Wishart. Groshans and her family don’t know exactly what led up to their relationship at that point or how Ida responded, but paired with some saved documents, records kept by Phillips County Historical Society and a few memories of still living relatives, 20-odd letters form a family history that’s also rich in local insights.
Charles was born April 12, 1869, in Wooster, Ohio. Ida was born April 14, 1870, in Memphis, Missouri. Charles’ family moved there when he was 10 years old, and years later, it’s where he and Ida’s courtship began. The details surrounding the beginning of their relationship are unknown, but according to family, they met when Charles was attending school in Memphis and their courtship lasted nine years.
Records vary, but it seems that Charles and his family moved to the Holyoke area when he was about 18. With that in mind, he and Ida’s courtship must have primarily occurred through written correspondence while he was living in Colorado and she was still in Missouri.
As noted in Charles’ obituary, his family homesteaded at the location where the Beachville rural school was eventually established, 7 miles north and 4 miles west of Holyoke. Among his descendants, some recall stories that when they first moved to Holyoke, the family lived in two different sod houses provided by neighbors until they built their own soddy.
Again, not much history is recorded from Charles’ early years in Holyoke, but a letter written to the county commissioners on Dec. 31, 1892, still in pristine condition, gives some insight.

Holyoke Colo. Dec. 31” 1892
To the Honorable Board of Commissioners
Phillips County Colorado
Gentlemen, I do hereby petition you, that I may be appointed to be my successor as Justice of the Peace in and for Precinct Three (3) of this county. Hoping that you will consider this application.
I am yours,
Charles R. Peter, Esq.
P.S. My term expires Jan. 10”, 1893.

A saved claim for payment dated Dec. 14, 1895, reveals that Charles was still acting as justice of the peace at that time, as he was owed $7.20 for his services in that capacity. A jurors certificate from May 1900 showed that he was paid $2.50 per day and 15 cents per mile traveled to be a juror in district court.
During that first decade or so in Holyoke, the family farmed. As noted in his obituary, Charles wrote examinations for the teaching profession in the spring of 1889. In “Those were the Days...,” it is said that the family sold the homestead in 1900 to Standard Sheep Company and moved to Holyoke on Sept. 17, 1900.
Charles mentioned in passing in one of his letters to Ida that he had taught a summer school in 1984 in the same district that he later was hired as a teacher.
It seems 1900 was a time of great transition for Charles and the people around him. He moved, left farming and got started on his career in education and got married. It also happens to be the period covered in the letters that are still around today.
As the letters began before his move into town, some details of farming are offered. He said in his June 17 letter that he’d spent four and half days cultivating corn the week before. On June 24, he wrote that he doesn’t expect more than “one-half a crop of grain.” Having mentioned that the garden is irrigated but the crops are not, he wrote to Ida, “I look anxiously at every cloud that comes in sight. While I want it to rain, I always think of hail.” He wrote also of his plans to spend the 4th of July in the corn field.
While still toiling on the farm, Charles tells Ida of his teaching prospects. As of June 24, he’d applied at one school with eight pupils but did not receive the position. “I am thinking of placing an application for a school about 5 miles south of Holyoke,” he wrote. That particular job had an eight-month term, paying $35 per month. “I would rather teach school than farm anyway,” he wrote.
Over time, farming continued and Charles secured a teaching position, starting with 13 pupils, with nine more to come. On June 30, he said of the farming, “The rains help the corn, but wheat, oats and grass are drying up. I see by the papers that wheat and oats will be almost a failure in Kansas, Neb., N. Dak., S. Dak. & Minnesota on account of the dry weather.”
That same day, he wrote that the family had managed to sell their house — $900 for 135 acres of land and improvements. “I hate to leave the homestead after spending over twelve years upon it getting it in shape, but I believe it to be the best on account of mother’s age and health.”
On July 8, he wrote that desirable houses in Holyoke were scarce. “Houses that could have been bought for $250 two years ago, now bring $450 to $500.”
Nevertheless, on July 28 he wrote, “We have bought us a home in Holyoke. It is quite a cozy place. The house has three large rooms. There is a fine lawn and pretty shade trees and is in a quiet part of the town. It is about five minutes walk from the center of the town.” Throughout the following letters, Charles told of plans to build a barn and an addition to the house.
On Sept. 8 he wrote, “We bought four lots yesterday that gives us a half block on a plat of ground 150 ft by 300 ft. I guess we will have plenty of room to stretch ourselves.”
Of course, the letters were personal, too, not just records of Charles’ daily life. One of his descendants’ favorite topics in the letters is the engagement ring. On June 17 he wrote “I will be pleased to send you a ring in token of our engagement should you think it proper.” He asked that she send a measurement of her finger, and two weeks later, after apparently receiving her answer, clarified that a jeweler told him the measurement should be taken at the knuckle. After another couple of weeks, he must have received all the information he needed, as he wrote, “I will get the ring now and will bring it to you if I come soon.”
Even through the one-sided view of the correspondence, it’s clear that Charles longed for the day they would finally be married. On June 30, he wrote, “I must confess that I get lonesome at times of late, and your kind and loving words seem to be the only thing that drives the loneliness away. I will not say how many times I have read your letters of late, but I can find new pleasure in them each time.”
Then on July 8, “I know now that I will never be satisfied until I see you, and have you with me all the time.”
And on July 15, “I am willing to wait for you to the end of time if need be, and I promise that my love for you shall always be true so long as I shall be spared upon earth.”