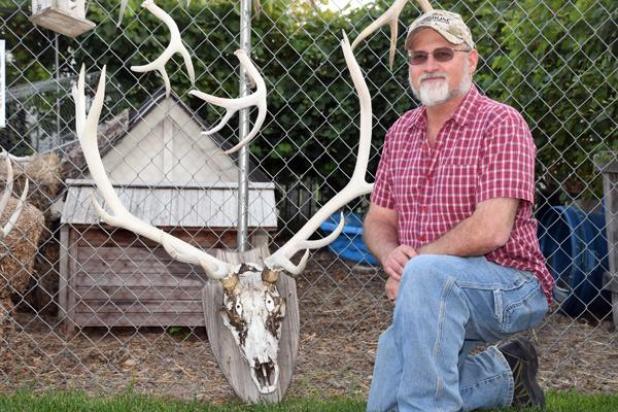 Eric Anderson kneels next to the skull of an elk he harvested with his bow. He said he was hooked on bowhunting after his first hunt with the weapon. — The Holyoke Enterprise | Johnson Publications

Eric Anderson doesn’t get discouraged by a hunt that ends without a kill. For him that’s part of the challenge — and fun ­— of bowhunting.

Anderson, a stake engineer with Highline Electric Association in Holyoke, said the bow is now his hunting weapon of choice, but he didn’t use it when he first started hunting.

Anderson grew up on a farm in Torrington, Wyoming, where his father taught him how to shoot. He had a .22 rifle when he was 10 years old, and he started out shooting prairie dogs on the farm. After high school, Anderson began to get more serious about hunting, going on deer and elk hunts in Wyoming.

It was about 15 years ago when Anderson first tried his hand at bowhunting. His roommate at the time was a bowhunter, and after Anderson’s first hunt with the weapon, he said he was hooked and stopped hunting with rifles altogether.

“When you get within 20 yards of a bull elk wanting to fight, that’s exciting,” Anderson said. “You get so close you can smell them and hear them stomping their feet.”

Anderson said that’s one of the main differences between bowhunting and hunting with a rifle. The effective range of a bow is 50-80 yards or so, far less than a rifle. This means a bowhunter has to get much closer to the anmial to have a successful shot.

Getting so close requires a bowhunter to also be very knowledgeable of the animal being hunted. Elk and deer have powerful senses of smell and hearing, so bowhunters have to use aspects of cover and camouflage to be successful. As with other hunts, it’s important to pay close attention to the wind direction to avoid alerting the animal to the hunter’s presence.

The full article is available in our FREE Hunting on the Plains section. Click here!