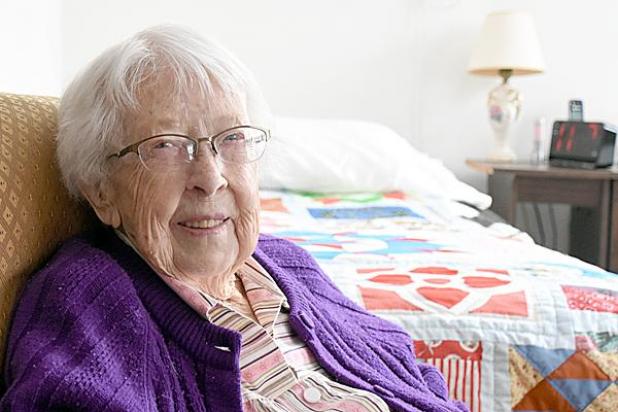 Though she transitioned to assisted living just a few months ago, 99-year-old Mary Allen  is making the Carriage House home. — The Holyoke Enterprise | Johnson Publications 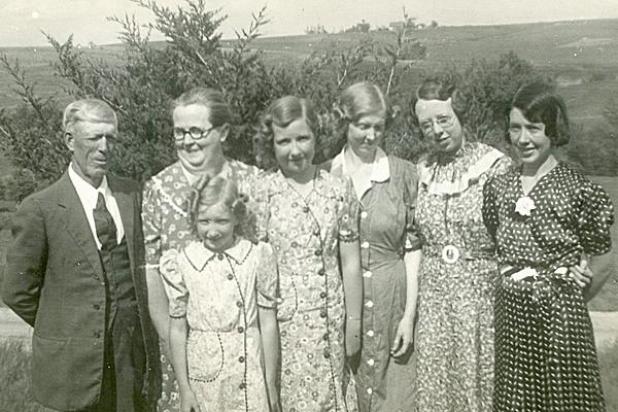 In 1940, parents Owen and Eppa Young are pictured with their daughters, from left, Margaret, Wanola, Myrtle, Mary and Stella. Four older half siblings and three brothers who had died by that time make up Mary Allen’s large family.

Getting to know Mary Allen may very well make you want to call your grandparents, but that’s probably a risk she’d consider worth taking. As Allen is nearing 100 years on this earth, she clearly knows a thing or two about living, and her love for family suggests there just might be something to nurturing those relationships.
In honor of the milestone birthday, Allen’s family has planned an open house Sunday, March 3, at 2 p.m. in the Phillips County Event Center Biesemeier Room. Cards may also be sent to 816 S. Interocean Ave. E14, Holyoke, CO 80734.
Throughout her life, Allen has been a sister to 11 siblings, a mother of three, grandmother of three more, great-grandmother of five and great-great-grandmother of eight. And she lights up when she talks about any one of them. Her daughter, Betty Roos, pointed out that, in her mom’s eyes, anybody connected to family might as well be family themselves, too.
Much of Allen’s family lives in the Holyoke area as well, and she enjoys the time she gets to spend with them. Photo albums kept close at hand are filled with mementos of special occasions and everyday life shared together. One photo in particular holds special meaning as Allen’s 100th draws near.
In the picture, taken about 12 years ago, Allen sits in a kid-sized car with great-great-grandson Ashton, who was 4. He later realized that he would turn 16 just a week after Allen turned 100 and promised he’d take her for a ride in a real car when he gets his license.
Looking back on when her three granddaughters were young, Allen was their only grandma and she readily embraced the role, spoiling them as grandmas do. “I was lucky I didn’t have to share,” she chuckled.
Even family that doesn’t have the benefit of living close by stays connected. Allen’s one living sister, Wanola Myers, lives in an assisted living facility in Hastings, Nebraska. Most evenings the two share a phone call.
Allen was born March 1, 1919, in Missouri, and she summarized the first half of her life succinctly: “I was born on a farm, married a farmer and farmed until ’57.” Like many in the area, she’s well acquainted with the demanding work of farming. Few, on the other hand, are still around that experienced Depression-era challenges that she did. Though Allen’s family moved southeast of Holyoke when she was 1, hard times, dust and hail prompted their return to Missouri when she was still a child.
She remembers the time when they had no TV — no electricity at all, in fact. She also recalls her family having a little radio. They’d hurry to finish their chores so they could hear the stories being broadcast.
Some of the things that eventually turned into Allen’s hobbies were the kind of things that begin as matters of necessity. Her family always raised a large garden, and she learned to can at a young age. Through the years, she’s also done plenty of quilting. She started out using whatever scraps were available, and it developed into a pastime she enjoyed sharing with her daughter for many years.
An uncle that lived with Allen’s family taught her to play piano. Someone had given them the piano, and her uncle paid a dollar for a piano book. He’d play along on his harmonica, and Allen has loved music ever since — especially religious songs. While living in Missouri, she played piano for a few different churches.
Allen married Vestil on July 3, 1936. He’d given her a check to order a ring from the Montgomery Ward catalog. It cost less than $5, and it didn’t arrive until after they got married. The couple’s children were born and raised in Missouri, but the two moved away in 1961. They traveled, working in different places, and in 1971, Allen faced a breast cancer diagnosis. She’s been a survivor for over 40 years.
In 1972, the couple moved north of Paoli, where they had a little acreage with some hogs and chickens. Vestil worked for different farmers in the area for as long as his health allowed it. The two moved into Holyoke in 1981, and they’d been married for almost 68 years when Vestil died in 2004.
Up until after her 99th birthday, Allen was still living at home. It wasn’t until last November that she moved into the Carriage House. Most know it as the local assisted living facility, though as great-great-grandson Lio Ayala tells it, Grandma Great is living in “the big house.”
There she’s found comfort in maintaining her own home while having the peace of mind that people are right outside should she ever need them. One of her first experiences there was last year’s Thanksgiving celebration, and she was pleased to see that the folks there do such a nice job honoring families with such events.
Some of the activities offered also happen to align well with Allen’s interests. Before she moved in, she played Bingo at the Lions Den just about every time it was offered. Now she can play at the Carriage House without making the trek downtown. She also usually goes out to the common room when there are musical performances.
All in all, she said there’s a lot to be thankful for, including many, many friends. If she knows the secret to living such a long life, she didn’t let on, but she did note that she’s tried to never hold a grudge. “I just enjoyed life,” she said, as if it were obvious.
In telling her story, Allen made several asides that she insisted needn’t be written down. Though she censored herself heavily, readers should know that, on top of everything else, she is a funny lady who may have a streak of mischief. Don’t let her quiet demeanor fool you.