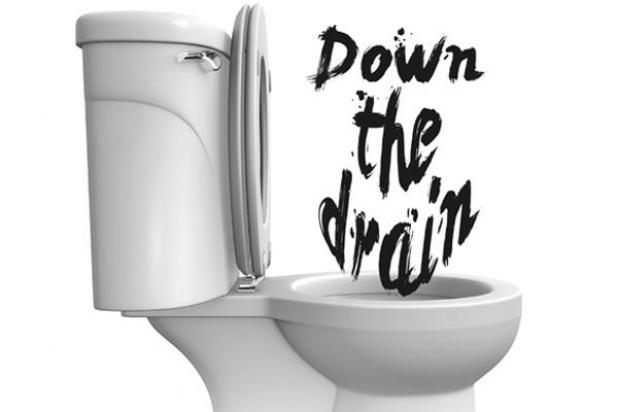 Down the drain: City money is flushed away with wet wipe misuse

When City Superintendent Mark Brown reported that Holyoke has a “really big problem out at the sewer lagoons,” he had the full attention of the city council. His approximation that the fix will cost the City hundreds of thousands of dollars stressed the gravity of the situation.
At the June 5 Holyoke City Council meeting, Brown explained that aerators in the sewer lagoons are getting plugged once or twice daily and crews are struggling to keep ahead of the problem.
The culprit? “Flushable” wipes, primarily. But Brown said they’re seeing other things — such as disposable underwear — causing problems, too. On one day, crews filled three polycarts with the problematic materials from just skimming the surface at the lagoons. Just because something can physically make it down the drain does not mean that it should be flushed. As the council is finding out, it may end up costing taxpayers big time.
Brown has been in contact with Tom Renner of Farns­worth Group to put together an engineering proposal to fix the problem, but council members are hoping community members will do their part, too, and stop flushing inappropriate things. In an effort to educate the public about what can and cannot be flushed, the council opted to mail a letter to every household on the municipal sewer system.
Many of the wipes do claim to be “flushable” right on the packaging, but Brown emphasized that even those do not belong in the toilet. The recent sewer problems are not unique to Holyoke; it’s simply a sign of the times, Brown said. He pointed out that one of the lagoons that previously went 17 years without being dredged is already in need of it again after having been done just two years ago.
Marketing for flushable wipes has exploded in recent years, and widespread sewer system problems along with it.

Officials, library board report
Brown commended all of the departments’ work put into preparing the cemetery for Memorial Day. He also reported that the electric department has been working at the fairgrounds and the airport, installing new electric service for the Phillips County Pavilion and the Crop Production Services hangar.
Street crews have been busy mowing and helping remove sod from the practice baseball field. While most of the sod went to Woody Woodhead in exchange for using his equipment to complete the job, some has been left on the field to be used at Heginbotham Library.
The pool was used to host a Northwest Kansas Swim League meet June 2, and Brown said 237 kids from eight teams utilized the facility.
Brown also noted that Newman Construction has been working on the fence project at the wastewater facility.
Police Chief Doug Bergstrom introduced Jorge Salas, the new officer cadet with Holyoke Police Department, to the council. Bergstrom also reported that HPD handled or generated 528 calls for service from May 10-30, including code enforcement. They made one arrest, wrote five reports and 25 citations, and gave out 77 warnings. Code enforcement handled eight animal complaints, one curfew violation, two dogs at large and 50 ordinance violations.
City Clerk/Treasurer Kathy Olofson reported that she is working on workers’ compensation and property-casualty renewals. She also distributed copies of the new audit to board members to review before Scott Szabo attends the June 19 meeting to give his report.
Sandy Triplette and Mary Austin were at last Tuesday’s meeting as well to report on the library board’s recent activity. Trees have been successfully removed, and the board is pleased with the work that was done. They also reported that the sidewalk repair is underway and work on the water garden is in progress.
For the summer reading programs, 78 kids and 18 teens have registered. The board has also started making plans for 2019 celebrations of the Heginbotham house’s 100th anniversary and the 50th anniversary of the library’s dedication.

Other business
In other business at the June 5 meeting, city council:
— Heard a request from Josh Young on behalf of Holyoke Volunteer Fire Department for the City to not cancel the insurance on the Tahoe HVFD recently purchased from the City. The matter will be on the agenda for the June 19 meeting.
— Agreed to pay recreation director Victoria Timm $750 to be head T-ball/machine pitch coach instead of Roni Beavers who was previously approved for the position.
— Hired Ethan Andersen, Josie Herman, Jackie Valenzuela and Traeli Hutches as new lifeguards at $10.20 per hour.
— Held a 26-minute executive session for a conference with City Attorney Al Wall to determine positions relative to matters subject to negotiations.