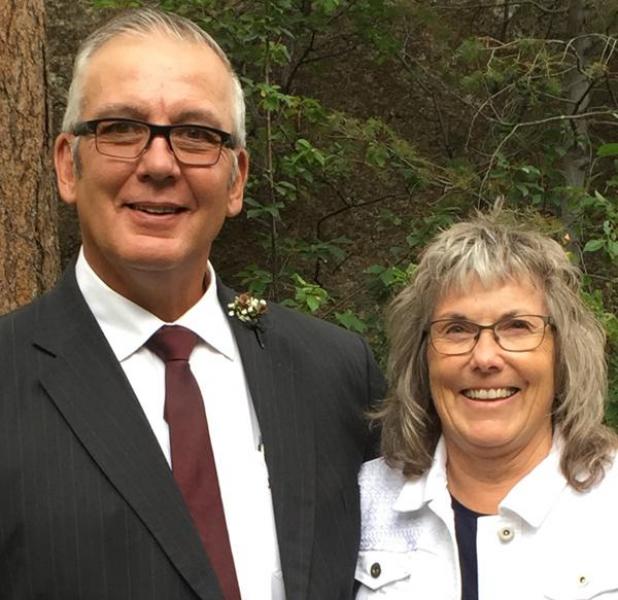 Bryan and Tammy Kroeger said they are overwhelmed by the support they have received from so many people in northeast Colorado and beyond. A benefit is scheduled Saturday, Nov. 21, at the Phillips County Event Center.

A benefit for Bryan Kroeger is scheduled to be held Saturday, Nov. 21, from 11 a.m. to 4 p.m at the Phillips County Event Center. Kroeger was recently diagnosed with amyotrophic lateral sclerosis, and the benefit is meant to rally the community together to help the Kroeger family during this time.

Due to COVID-19 restrictions, a maximum of 50 people can be inside the event center at a given time. Outside seating will also be available if weather permits.

A silent and live auction are also planned for the benefit, and bidding for both is open on the Bryan Kroeger Benefit Facebook page. Facebook bidding will be available until 10 a.m. Saturday, Nov. 21. The live auction will begin at 1 p.m. Nov. 21, outside on the west side of the event center, using the bids received by 10 a.m. as the baseline bids. The silent auction is scheduled to continue at the event center until 4 p.m. People interested in more information should contact Marla Camblin at 970-520-7330.

Bryan Kroeger knew something was wrong about a year ago when he fell off a wheat drill twice and out of a truck a few times. He said it felt like his foot was getting hung up when getting out, but he hadn’t tripped over anything.

Then, during a game of horse, the basketball only went about 3 feet when it felt to him like a normal shot.

He thought it was clumsiness or his back, which had been acting up on him for some time.

Another time, he fell and landed in the pushup position. His left arm gave out as if it had no strength. He said there wasn’t any pain, just fatigue and weakness.

A wrench slipped out of his hands three times while tightening a piece of metal on top of a combine. He said his left ankle began to feel like it had no support and was about to roll. He began to experience muscle cramps and twitching in his arm at night.

At this point, Kroeger had been seeing doctors since May, thinking the symptoms might be caused by a pinched nerve in his back.

His back surgeon told him that he needed back surgery but advised there was something else happening. He began to see a neurologist and went through a series of tests eliminating potential causes of the symptoms. In mid-to-late September, he took an EMG test, which pointed to the likelihood of ALS. The diagnosis was confirmed Nov. 10.

ALS is an incurable neurological disease in which a person loses the ability to move their arms, legs and other muscles, including those used to eat and breathe.

Kroeger remains positive, noting that the staff at Melissa Memorial Hospital has been very helpful through this process and all the scans and tests that have been required.

“The word ‘family’ to me really sticks out because they take care of you like family,” he said of Family Practice of Holyoke. “They’re amazing times 10.”

He has been receiving physical, occupational and speech therapy at MMH. The staff has taught him stretches, breathing techniques and exercises to help with motor skills. He can also practice much of what he’s learned at home.

“I have so much to be thankful for,” he continued, noting that his wife Tammy, through her actions and example, has been preaching the gospel without using words. “Tammy has really been living the ‘for better, for worse’ aspect of the wedding vow,” he said.

“We have to live each day to the fullest as there’s no cure for this disease and we don’t know what quality time we have together,” Tammy said. “We’ve learned to slow down a little bit and not focus on the negative and to praise God for the friends and family we have. We have to appreciate the time we have together and live.”

The Kroegers have three children. Daughter Kassie McConahy and her husband Nick live in Spokane, Washington, with their three children Kaiden, Hunter and Maddison. Son Kendall and his wife Kristin live in Strasburg, and son Gunnar lives in Holyoke.

Bryan said he feels that they have five children, as their children’s spouses are such an integral part of the family. “These five children are my heroes, and I am so absolutely proud of each and every one of them,” he said.

“Grandma and Grandpa Dubbert have been instrumental not only as a mother- and father-in-law, but as bosses as I worked at Dubbert Farms,” he continued. “I can’t ask for a better set of in-laws, including brothers- and sisters-in-law, whom I consider my brothers and sisters.” These include Debbie and Ted Blakeman, Brenda and Tony Krueger, and their families.

Bryan and Tammy said they are overwhelmed by the support they’ve received from all over northeast Colorado, specifically Haxtun, Holyoke and Paoli. They said everyone has been very engaged and generous. They are grateful to Camblin, Beth Zilla and Trudy Herman for organizing the Nov. 21 benefit; Keith and Elise Pocock for organizing a GoFundMe campaign; Holyoke and Haxtun community federal credit unions; and the restaurants in the community.

“What resonates in my head is people saying to Tammy and me, ‘Just let us know, and we’ll do whatever we can,’” he said. Adding that they never went hungry, Bryan said family and friends have cooked for them, assisted financially, sent encouraging notes, prayers and called in person and on the phone.

He noted with a smile that people have even delivered him Krispy Kreme doughnuts.

“There’s nothing better,” he said, “and it seems like there’s always a shortage at the Kroeger household.”

Bryan also acknowledged that their church family at Cornerstone has been incredible.

“They are the best prayer warriors ever,” Tammy said. “Prayer is the tiny nerve that moves God’s hand.”

Bryan said he has incredible peace about the diagnosis. “I gave my life to Christ March 10, 1984,” he said, “and I was healed that day.” He added that he is so happy to be the chaplain for the Holyoke Volunteer Fire Department, saying they’ve been gracious to allow him to be a part of it.

He continued, “Maybe this is my miracle, to be in the ALS ministry and to run the race that’s set before me.” He pointed to Acts 20:24, which he says is his life verse. It reads: “However, I consider my life worth nothing to me; my only aim is to finish the race and complete the task the Lord Jesus has given me — the task of testifying to the good news of God’s grace.”

He said he wants to make sure that the community remembers others who may be in need.

“Our community has witnessed this ALS disease previously, along with other diseases,” he said. “God’s heartbeat is ‘people, people, people.’ I’m not the only one hurting in the community. Please don’t hesitate to reach out to others in our precious communities.”

Bryan said that because the speed of the disease’s progression is so variable and unknown, he wants to do the things he wants to do while he still can.

He said one of the many highlights of community involvement was when he attended a guitar performance by Colby Purkeypile one evening. Purkeypile had come to visit for the weekend and wanted to play for Bryan, which Bryan said was a very meaningful experience for him.

“Singing is a love of mine,” Bryan said. “I will still sing, but it’s not like it once was.”

“He has a beautiful singing voice,” Tammy said.

Bryan said singing now requires more effort, and he has less voice control. It also feels to him as though he has reduced lung capacity.

Kassie has always told her dad he needs to record himself singing so she can listen to the recordings when she’s not able to be physically near him.

On the night of Nov. 12, Pastor Mike Brown of First Christian Church and Rob Browning of Imperial, Nebraska, helped make that a reality.

For over an hour, Bryan joined them in singing, playing music and recording songs. When they were done, the three unanimously agreed that they’d be doing it all over again soon.