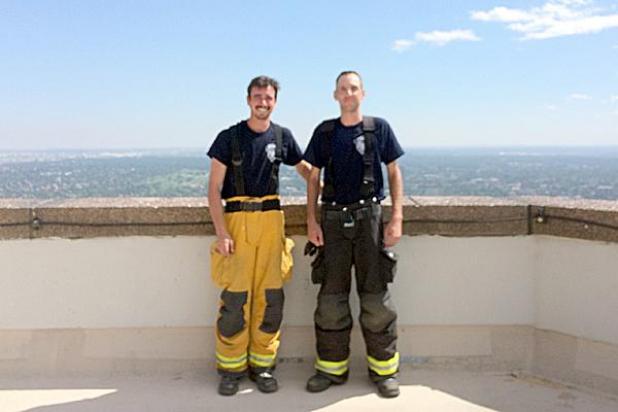 Holyoke volunteer firefighters Sam Distefano and Lance Murray, pictured from left, are at the top of 1801 California Street in Denver.

Starting in 2005, people in the fire service have participated in the Denver Metro Firefighter’s 9/11 Memorial Stair Climb each year. The inaugural climb had just five participants, but it quickly gained popularity. It’s now limited to 343 people — one for each NYFD firefighter that was killed in the 9/11 attack on the World Trade Center in New York. This year, two of the participants in the stair climb represented Holyoke.

Sam Distefano and Lance Murray of Holyoke Volunteer Fire Department joined other firefighters from 15 states for the stair climb at 1801 California Street in Denver. Dressed in full turnout gear and carrying a piece of equipment, each firefighter climbed 55 flights of stairs to the top of the building. After returning to the bottom via freight elevator, they repeated the climb. The 110 total flights climbed are equal to the height of the Twin Towers.

At the risk of stating the obvious, that’s a lot of stairs — even without the 50-odd pounds of weight added by the gear. So why do it?

As said in the Denver Climb mission statement, “Firefighters climb the stairs in the same turnout gear, carrying the same type of equipment that our Brothers carried on 9/11, and the same gear we carry into fire buildings on a daily basis. We do this to truly remember them, and to reinforce our commitment to those we have sworn to protect.”

On a personal level, Distefano said he felt compelled to sign up to honor the memory of the firefighters. Though he was only in fifth grade at the time of the attack, he remembers seeing the news and hearing about it at school. He didn’t fully understand the impact at the time, but he does now, and he appreciated the fellowship and remembrance he experienced at the climb.

Murray did the stair climb once before in 2009. It was the fifth year, and he’d seen it on the news in previous years. Interested in being a part of honoring other firefighters, he signed up. When he finished, he said he hoped to do it again in the future; this year that finally happened.

In Holyoke, Distefano has been a volunteer firefighter for five years. At the moment, he serves as the second assistant chief. Murray has volunteered with HVFD for 14 years.

In addition to honoring NYFD firefighters, the registration fees paid to complete the climb go toward the National Fallen Firefighter Foundation, which provides ongoing and future support to the families of the 9/11 firefighters.