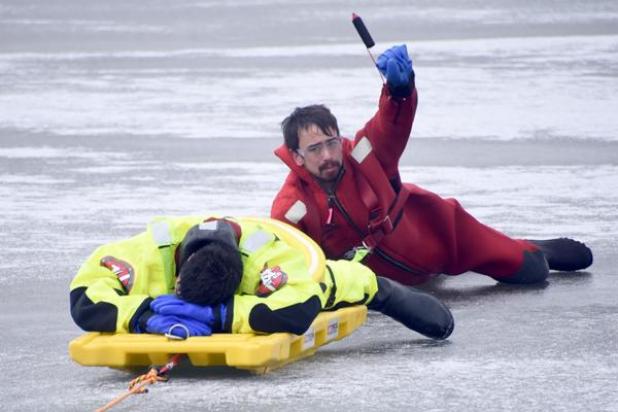 Sam Distefano, playing the role of a rescuer, signals a team on the shore of the Lions Club Fishin’ Hole, while Dustin Carrick, playing the victim, lies prone on a rescue sled. The simulated rescue was conducted during a Jan. 11-13 training for Holyoke Volunteer Fire Department and other nearby rescue agencies. — The Holyoke Enterprise | Johnson Publications 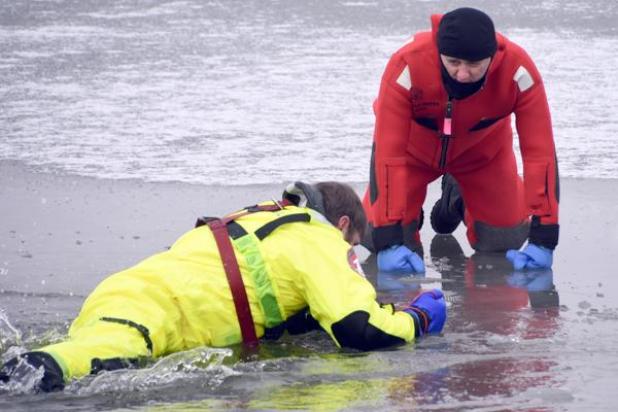 Scott Korte of Holyoke Volunteer Fire Department and rescue instructor Dave Martin are pictured from left, as Martin gives encouragement to Korte, who is attempting to pull himself out of the frozen-over Lions Club Fishin’ Hole. — The Holyoke Enterprise | Johnson Publications

Holyoke Volunteer Fire Department members, and other rescue workers from the area, practiced getting themselves and one another safely off the ice last Sunday, Jan. 13, during the final day of a three-day ice rescue course.
The rescues were staged at the Lions Club Fishin’ Hole, where three holes were cut in the ice to practice rescue techniques using ropes, poles and sleds.
Teams worked out on the ice and from the shore to safely recover department members playing the role of victims.
Phillips County Emergency Manager Bob Heldenbrand played the role of incident commander during the simulated rescue missions, coordinating communications between different rescue personnel.
Heldenbrand said the need for rescue training became apparent after a December 2017 incident, where a dog fell through the surface of the pond and was followed by its owner, who also became stranded. Both dog and owner survived.
“We’ve always known that the pond had a potential for an incident,” Heldenbrand said. “We knew there was a need to train after 2017.”
The fire department subsequently sent five members to Limon to train in ice rescue operations and purchased an arsenal of rescue equipment, including a rescue sled, rescue suits, flotation devices, ropes, bags, a reach pole and various other hand tools.
Lead instructor Bo Tibbets of Grand Junction-based Public Safety Dive Supply said the circumstances of the 2017 incident are not at all uncommon.
“Most of these incidents start with dogs,” he said. “When the owners follow them out, it just exacerbates the situation.”
Tibbets and two other instructors guided the 24 students in the classroom portion of the course, as well as Sunday’s hands-on rescue training.
An individual who has fallen through a hole in the ice may experience four phases of incapacitation, Tibbets said. In the first phase, cold shock response, the victim becomes short of breath and experiences vasoconstriction, which forces the heart to work harder to pump the same amount of blood.
Surviving the first minute of cold shock response is crucial, Tibbets added, and a victim is much more likely to survive the subsequent stages of exposure if they can last a minute in the water.
Following cold shock response, cold water incapacitation starts to set in after five to 15 minutes. Hypothermia does not set in until roughly 30 minutes have passed.
It is still possible to suffer fatal injuries due to circum-rescue collapse once a rescue has started. Circum-rescue collapse is a complex condition in which the stress of the operation may cause sudden hormonal changes and potentially fatal cardiac events.
If a pet or another person has fallen through the ice, Tibbets advised waiting for professional help, rather than risk falling in.
“Call 911. Don’t try to do that yourself,” he said.
Heldenbrand later stressed that the ice at the pond was barely thick enough to conduct Sunday’s exercises and that crossing the pond without proper training and equipment was extremely dangerous. He also speculated that the rescue training may have made the ice even more fragile.
In addition to HVFD, the training was attended by rescue workers from Limon, Hugo, Amherst, Sedgwick, Holyoke’s AirLife helicopter service and Imperial, Nebraska.
HVFD will participate in another specialized training Sunday, Jan. 27, focusing on grain bin rescue operations.