Flags will fly over Memorial Day weekend; no program this year 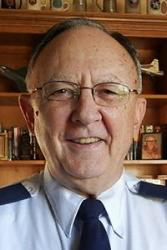 Due to COVID-19 restrictions and concerns, there will not be a Memorial Day program at Holyoke Cemetery this year. But that doesn’t mean military personnel who died while serving in the United States Armed Forces won’t be honored on Memorial Day, Monday, May 25.

Large American flags, which were donated by the Millage family, will be flying high along the west edge of the cemetery over the holiday weekend. Flags will also be placed on veterans’ graves. Volunteers who would like to help with this project should meet at the cemetery entrance Friday, May 22, at 5 p.m. to place the flags and Monday, May 25, at 5 p.m. to remove the flags.

Locals may remember Lt. Col. Bob Russell, who has been the featured speaker at Holyoke’s Memorial Day program in the past. Since he will not be here to speak in person this year, he is sharing his written thoughts in this week’s Enterprise.

As we approach Memorial Day weekend, we Americans find ourselves under a cloud of confusion and concern as the COVID-19 virus continues to wreak havoc on our lives. Again, as in the article I wrote earlier for the Enterprise about this virus, I quote Thomas Paine, who addressed situations like this perfectly: “These are the times that try men’s souls.”

With regard to the coronavirus, nothing could be more descriptive. Memorial Day celebrations and parades are being halted across our nation, as we don masks and ensure “social distancing” guidelines, realizing that a large gathering at the Holyoke Cemetery would not align with those directives.

For example, the American Veterans Center has decided to cancel the 2020 National Memorial Day Parade in Washington, D.C., due to the COVID-19 pandemic. The Center proclaimed, “It has been our great honor to uphold the tradition of this magnificent parade, and we will look forward to the parade’s return next year as we continue to honor the service and sacrifice of our military men and women.”

The American Legion offered the following on their website: “On Memorial Day this year, how Americans honor the more than 1 million men and women who have lost their lives defending America since the Revolutionary War will look different in many places due to safety concerns surrounding the COVID-19 pandemic. With social distancing efforts in place to slow down the spread of the virus, Memorial Day parades and events are getting canceled across the nation.”

The Veterans of Foreign Wars also provides a good overview: “It is a sacred day to all war veterans: None need to be reminded of the reason that Memorial Day must be commemorated. Sacrifice is meaningless without remembrance. America’s collective consciousness demands that all citizens recall and be aware of the deaths of their fellow countrymen during wartime.”

The organization added, “Far too often, the nation as a whole takes for granted the freedoms all Americans enjoy. Those freedoms were paid for with the lives of others few of us actually knew. That’s why they are all collectively remembered on one special day. By honoring the nation’s war dead, we preserve their memory and thus their service and sacrifice in the memories of future generations.”

The VFW notes that men and women came from all walks of life and regions of the country to serve their nation. But they all had one thing in common — love of and loyalty to country. This bond cemented ties between them in times of trials, allowing a diverse lot of Americans to achieve monumental ends.

They continue their observations, noting that we should take stock in these observations and remember the loss of loved ones, a sense of loss that takes group form. In essence, America is commemorating those who made the greatest sacrifice possible — giving one’s own life on behalf of others. Means of paying tribute vary; however, pausing for a few moments of personal silence is available to everyone.

The VFW concludes: “As America’s older war veterans fast disappear from society’s landscape, there are fewer and fewer standard-bearers left to carry the torch of remembrance. Such traditions will live on only if there is a vibrant movement to which that torch can be passed. This much is owed to the more than 4,500 Americans who have died thus far in Afghanistan and Iraq.”

The famous Greek statesman Pericles, who ruled Athens from 495-429 B.C., offered these comments in remembering those who fought and died for Greece: “Not only are they commemorated by columns and inscriptions, but there dwells also an unwritten memorial of them, graven not on stone but in the hearts of men.”

By the way, no one is exactly sure when “Decoration Day” first started, but the first official observance at Arlington Cemetery took place three years after the Civil War was over. On the fifth of May, 1868, Maj. Gen. John A. Logan declared that May 30 would be a day to honor the dead.

He observed, “We should guard their graves with sacred vigilance. Let no neglect, no ravages of time, testify to the present or to the coming generations that we have forgotten as a people the cost of a free and undivided republic.”

In 1971, Congress declared that “Memorial Day” would be a national holiday taking place on the fourth Monday of May. So where did the first celebration take place? The History Channel website explains that more than 20 towns claim to be the holiday’s “birthplace” — but only one has federal recognition. For almost as long as there’s been a holiday, there’s been a rivalry about who celebrated it first.

Boalsburg, Pennsylvania, bases its claim on an 1864 gathering of women to mourn those recently killed at Gettysburg. In Carbondale, Illinois, they’re certain that they were first, thanks to an 1866 parade led by Maj. Gen. Logan. Columbus, Mississippi, and Columbus, Georgia, have battled it out for Memorial Day supremacy for decades.

Only one town, however, has received the official seal of approval from the U.S. government. In 1966, President Lyndon B. Johnson signed legislation passed by Congress declaring that Waterloo, New York, was the “official” birthplace of Memorial Day. And the debate will continue, no doubt.

Do you perhaps wonder just how many Americans have given their lives for their country’s freedom, from the formation of the “United States” until now? The Department of Defense provides approximate numbers from the major conflicts.

The American Revolution, War of 1812, Spanish-American and Mexican wars claimed about 22,500 deaths all totaled. The Civil War resulted in 620,000 deaths. Two World Wars totaled 522,000 deaths. Korea and Vietnam resulted in about 95,000 deaths. The wars in Afghanistan, Iraq and Syria now approach 7,200 deaths.

Additionally, many thousands more were injured or crippled, and the Military Times points out that about 81,000 service members are still listed as missing in action in wars overseas.

Across the nation, Memorial Day parades and gatherings are being canceled this year, but one tradition stopped last year, according to the Military Times. For the last 32 years, the annual Rolling Thunder Memorial Day ride has drawn ever-larger crowds to the streets of Washington, D.C. Around 2,500 motorcyclists rode at the first one — in 1987 — and last year, over 500,000 motorcyclists were involved. It will not be held this year or in future years — due to cost and security. (I hated to see this, for I had hoped to participate in this amazing event, being a Christian Motorcyclists Association member.)

More to the point of this year’s cancellation of Memorial Day events, the American Legion offered some other interesting information from their website. Sadly, some of our service members have been lost to things other than enemy fire. Some have died from diseases that have too often festered around war zones. Oftentimes deaths from disease and accidents outnumbered casualties caused by enemy weapons.

As an example, during the Spanish American War, 60 soldiers of the all-black 24th Infantry Regiment volunteered to serve as nurses. Thirty-six of them would later die of yellow fever or malaria. A generation later, the flu would kill nearly 16,000 U.S. soldiers in France during World War I. Another 30,000 American service members died stateside. These men and women could have isolated safely in their homes, but they knew they had an important job to do and a mission to accomplish.

The bottom line: Even when the enemy is an invisible virus or a microscopic germ, the sacrifices made are just as meaningful. The U.S. military has already lost men and women to COVID-19. As of the end of April, the Military Times reports that COVID-19 has brought the military’s total to 4,213 cases, according to the Defense Department’s latest data. That figure puts overall infection rate around 0.2% for troops, whereas the overall U.S. infection rate among residents is almost 0.3%.

Two-thirds of those cases came from the Navy, due to outbreaks on two ships. A little over 1,000 sailors on the aircraft carrier Theodore Roosevelt and destroyer Kidd tested positive. In fact, the Navy’s 1,659 cases account for 40% of the military’s numbers, followed by the Army, a larger service, but having around 995 cases, followed by the Air Force with 347 and the Marine Corps with 304, as well as 792 National Guard airmen and soldiers.

Thank the Lord, to date, about 30% of troops who have contracted the coronavirus have recovered, for a total of 1,258. Just over 2% have required hospitalization, or 91 total. And with two fatalities, the military’s mortality rate is statistically insignificant.

Overall, the Defense Department has recorded 6,568 cases among troops, civilians, dependents and contractors. With seven deaths among 423 contractor cases, that group’s 1.7% mortality rate is the highest among the groups. So far, 61 have been hospitalized and 137 have recovered.

Good news: Dependents have the highest recovery rate to date, with 287 out of 850 cases recovered, while 33 have been hospitalized and four have died, for a rate of 0.5%. Fortunately, it appears COVID-19 has the least impact on our young people.

This Memorial Day as we continue to honor those who fell for us in battle, let’s also pause to remember those who have also sacrificed their lives while serving others.

May God bless all the brothers, sisters, children, parents, grandparents and friends who toiled to support our military men and women, and may God bless you and keep you healthy in this time of pandemic concern.

I am sorry I can’t be in my hometown this year, but perhaps it will once again be my privilege to come speak at next year’s Memorial Day celebration at the Holyoke Cemetery. I want to thank Terry Barth and Steve Millage for asking me to come and say a few comments in years past.

We will get through this pandemic. Remember the words of the Apostle Paul, who said, “Do not be anxious about anything, but in everything by prayer and supplication with thanksgiving, let your requests be made known to God.” (Philippians 4:6 ESV)

My very best to my family and friends in Holyoke. Be safe, and I pray that our national and state leaders address this pandemic properly.

EDITOR’S NOTE: Bob Russell was born in Sterling and raised in Holyoke, graduating from HHS in 1964. During his 20-year Air Force career, he was most happy when piloting an F-15 Eagle through the skies. After proudly wearing the uniform for two decades, he retired in 1988 and helped design fighter cockpits for Lockheed-Martin Aerospace for another 20 years. Retired now in Aledo, Texas, Russell is involved in many aspects of ministry. He also loves to write, and his wife, Judy, and son, Brian, often put up with his sometimes misguided energy. He loves to provide articles for the Enterprise and thanks the paper for using some of his written thoughts.
holyoke weather forecast