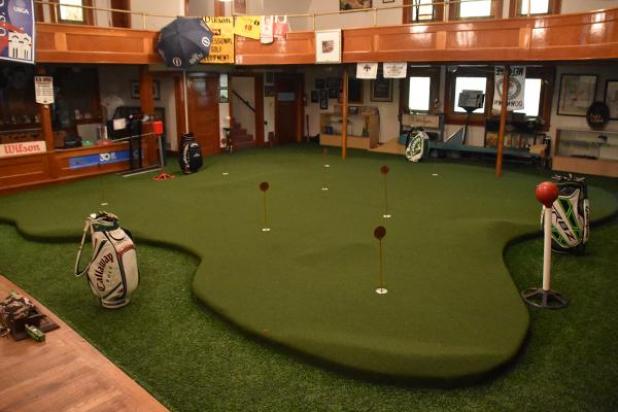 Inside the sanctuary of the former First Baptist Church building, Matt Cole has established his collection of golf memorabilia, including a nine-hole indoor putting green. — The Holyoke Enterprise | Johnson Publications 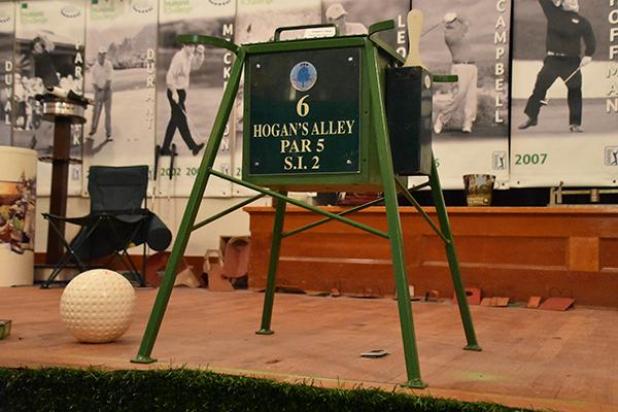 A tee marker from hole six on the Carnoustie Golf Links in Carnoustie, Scotland, sits among the items in golfer Matt Cole’s collection. Behind the marker is a baptismal font formerly used by First Baptist Church and a wall of banners featuring famous golfers. — The Holyoke Enterprise | Johnson Publications

Holyoke’s First Baptist Church may have left its former building at the corner of Baxter Avenue and Gordon Street more than five years ago, but the building’s current owner, Matt Cole, said it’s still called “The Church” to this day.
What once served as the church’s sanctuary now shelters something more of-this-world — several hundred pieces of golf memorabilia, ranging from balls and clubs to signed hats, photographs, trophies, banners, outdoor furniture, an indoor putting green and more.
Cole, the golfer responsible for the collection, said the space was a place for him to express his love for a game that he’s spent his life following and enjoying.
“It’s really all memories,” he said. “Most things in there have some kind of a personal attachment.”
Part of the building is currently used for caddie housing by Ballyneal Golf Club, while the former sanctuary is taken up completely by the collection.
Cole’s passion for the game began as a young child, when he started accompanying his father to golf tournaments. Though neither of his parents played, he said his father’s job as an accountant for Tucson Parks and Recreation gave him access to the Tucson Open, which was formerly played on the Randolph Park Golf Course near the TPR office.
Cole was soon picking up whatever golf gear he could and getting it signed by his favorite athletes.
“I was getting hats and balls and whatever else they would give me,” he said.
When he was about 7 years old, Cole said, he was able to flag down World Golf Hall of Fame inductee Lee Trevino, who signed his hat. He also mentioned Don Massengale giving him a double-eagle ball in 1977.
Even though Cole enjoyed watching golf as a child, neither of his parents played, and it wasn’t until his senior year of high school that Cole started hitting the links.
“I just started going with buddies, and I literally don’t think I’ve ever put a club down since,” he said.
Cole said the collection proper started in 1995 — to his knowledge, the first piece acquired by him to be included in the Holyoke collection is a hat from the ’95 Phoenix Open.
The sanctuary is filled with a variety of equipment and merchandise. Apparel, including jerseys, hats, footwear and tournament lanyards, are modeled on mannequins throughout the room. On the north wall, above the church’s old baptismal font, rows of banners immortalize famous golfers active from the ’60s to the present day.
Cole mentioned a tee marker purchased from Carnoustie Golf Links in Carnoustie, Scotland, and a thank-you letter signed by World Golf Hall of Famer Arnold Palmer as items of particular significance to him.
And of course there’s the nine-hole, roughly 500-square-foot putting green, which takes up most of the floor space in the room. Cole installed the green not long after purchasing the property.
Cole kept his collection at home, packed away in boxes, before buying the building in 2013. Most of the items were acquired after the space was bought.
When asked, Cole said he did not have plans to open the collection up to the public but said it has to be seen to be appreciated fully.