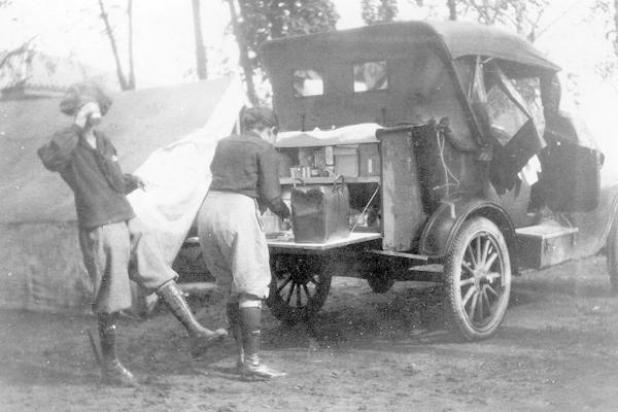 Jane Imlay, at left, and future sister-in-law Louise Kuhl, mother and aunt of former Holyoke resident Jane Krueger, make camp in Omaha, Nebraska. The photo noted it was the first and only mud they found as they traveled the Detroit-Lincoln-Denver auto route in 1924.

It was the early 1920s, and — with automobiles accessible to the middle class — millions of tourists were traversing the country over increasingly defined, graveled “motor trails.” Two of those, the Detroit-Lincoln-Denver and the Gulf, Plains and Canada, intersected at Holyoke.
Free-of-charge municipal “motor camps” or “tourist camps” were developed along these routes to accommodate the throngs of tent-toting auto-campers. Their vehicles, such as Henry Ford’s popular Model T, were minimally equipped as precursors to the modern-day RVs, and Holyoke’s campground was among the finest, according to accounts of that era.
Holyoke’s population nearly doubled between 1910 and 1920, from 659 to 1,205, according to census records.
Local businessmen’s interest in promoting the D-L-D as an east-west route of choice ran high due to the economic benefits of capturing the coast-to-coast tourist traffic for the growing town.
Newspaper editors of the day urged citizens to be especially hospitable to the town’s tourists, hoping those looking to resettle somewhere might choose Holyoke.
“The camping grounds recently laid out by Holyoke’s businessmen near the public school buildings is attracting hundreds of tourists daily,” reported the July 20, 1920, Holyoke Enterprise, placing the new camp in the vicinity of the present day Holyoke City Park and Holyoke Elementary School.
“Many improvements are being made at the grounds, and every convenience possible will be ready for the camper as soon as possible. A large brick oven is being built this week for the cooking of meals which will be a welcome addition to the site.”
Numerous articles appearing in the newspaper’s spring and summer editions over the next few years confirm that the campground’s popularity was sustained. It was expanded to alleviate overcrowding and was further developed.
“A conservative estimate is that 500 tourists have made use of the Holyoke campgrounds each week during the past month, with from five to 40 cars parked there each night,” reported the Enterprise edition of Aug. 2, 1923.
“The 1923 tourist season has been the greatest in the history of all routes, while the largest number of travelers have been passing over the D-L-D in this territory this year because of the poorer condition of the other nationally known roads,” continued the story. “This sends intensely heavy automobile traffic through Holyoke, and the reputation built up during the past couple of years by the local campground induces a big proportion to make Holyoke for the evening camp.”

EDITOR’S NOTE: Lanelle Krueger, daughter of Jane and the late Darvin Krueger, currently lives in Longmont. She served as the history text editor of the Enterprise’s Holyoke Centennial Edition in 1988.
holyoke weather forecast