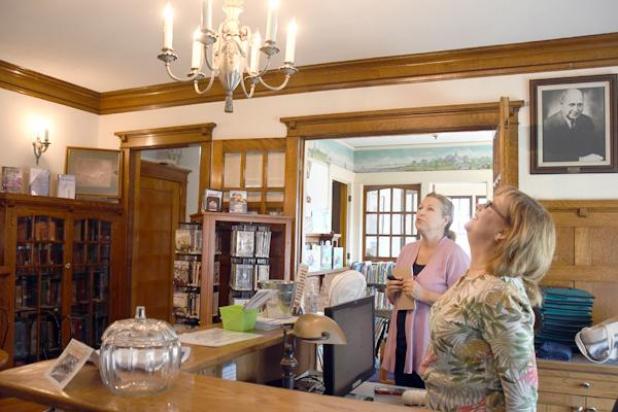 Librarian Kathy Bornhoft, at left, and staff member Laura Krogmeier admire the chandelier, reportedly from South Africa, that hangs above the circulation desk. A photograph of Will E. Heginbotham can be seen on the wall of what used to be his formal dining room. China cabinets now hold books, and through the doorway patrons can see the original breakfast room with a Dutch mural on the wall. — The Holyoke Enterprise | Johnson Publications 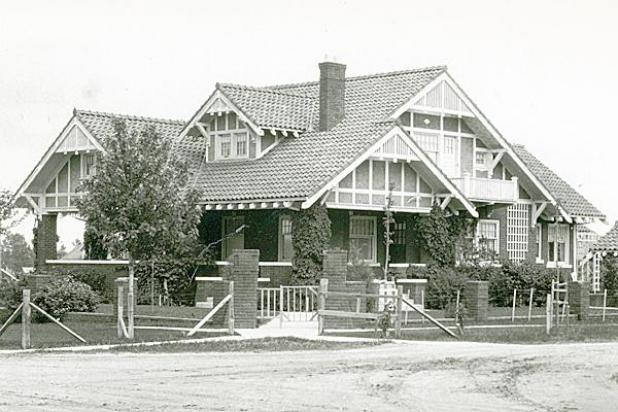 The Craftsman style bungalow at 539 S. Baxter Ave. is one of the most recognizable buildings in Holyoke. It was built for Will E. Heginbotham, a prominent banker, 100 years ago. The mansion, which is pictured in its early days, has served as the local public library since Oct. 5, 1969, and is touted as a community treasure. — Source: Phillips County Museum

Heginbotham mansion turns the page on a new century

To the fine, upstanding citizens of Phillips County, you are cordially invited to a grand celebration Sunday, the 29th of September. It is a historic day indeed, because the residence located at 539 S. Baxter Ave. in Holyoke has marked a century milestone, and for 50 years, the mansion has served as the public library of the City of Holyoke. The Heginbotham Library trustees and staff are planning a joyous event from 2-4 p.m. that will include a special program at 2:30 p.m., mystery guests, light refreshments, tours of the mansion, and games like badminton and croquet. Friends of the Library will also be available to answer any questions about their organization. You are most welcome to dress in a period costume from the Roaring ’20s or 1960s.

The Oct. 1, 1920, Holyoke Enterprise reads, “Contrary to the general opinion prevalent throughout the east that people who live in Colorado miss the pretentious homes common in the east, Holyoke presents an entirely different aspect to the visitor. The accompanying photograph is one taken of the home of Mr. and Mrs. W. E. Heginbotham of this city.

“This home is one of the best in the west and was completed a year ago. It is constructed of brick and is surrounded by gardens containing plants of every variety, some coming from the Hawaiian islands. The home in its interior appointments rivals those of the larger cities, the decorations being the work of artists and the furniture matching perfectly.”

In 1918, Heginbotham hired Denver architect Michael McEachern to build a home for $75,000. (Inflation calculators estimate that would be over $1.2 million in today’s money.)

The application for the National Register of Historic places said the house, garage and structural landscape features were probably from a design book or a house catalog and are embellished with prefabricated components, especially the interior oak millwork.

The exterior included red molded tapestry brick trimmed in terra-cotta and an emphasis on English half timbering motifs, meaning the timbers are exposed. The roof was covered in Spanish tile.

A low brick wall formed a border around the large piece of property. A carriage house could be entered from either the north or the south, with a long driveway through a porte cochere (a roofed passageway) attached to the north side of the house’s wrap-around porch.

Heginbotham was an amateur gardener in the English tradition. According to the application, the gardens originally covered half a city block but were reduced to nearly half the size with the use of the north grounds for Melissa Memorial Hospital that Heginbotham donated to the community.

The chandelier and wall sconces in the dining room were reportedly sent from a friend from South Africa and are reputed to be pewter over brass. A Dutch artist painted murals in the breakfast room, and the wood from the buffet was sent from South America.

Other unique details of the house included a buzzer to alert the servant, a laundry chute, a large vault in the basement and a vacuum system with a small hole in the wall of each room that a hose could be attached to.

So how did a house as grand as this become a library?

Catherine Heginbotham died in 1960, followed by her husband Will Heginbotham April 13, 1968.

The couple had no children to leave their estate to, so the will of this prominent Holyoke banker and philanthropist stated his estate was placed in trust for “the betterment and improvement of the people of Phillips County.” The interest on the original $2.4 million bequest is spent annually throughout the county.

Heginbotham’s residence was deeded to the hospital building operation. Shortly after his death, the hospital corporation turned the deed over to the town. However, there was one stipulation: It should never be sold into private ownership.

The Agenda Club spearheaded a community project to clean and paint the building to prepare the house for its new role as a library. On Oct. 5, 1969, the library was officially dedicated, and shortly after, the name was changed from the Holyoke Public Library to Heginbotham Library.

Approximately 180 guests attended the dedication, with Anna Pettys of Sterling paying tribute to the community endeavor. Librarian Goldie North officially opened the doors, and Jerry Cox, president of the library board, served as master of ceremonies.

While Holyoke can trace its library roots as far back as World War I, when it moved into its new home 50 years ago it became one of the most unusual and unique public libraries in the state.

In 1988, the mansion was entered into the National Register of Historic Places, largely due to the meticulous work by Carol Koontz. It was noted that the historic preservation board doesn’t often see a building with both the interior and exterior intact in terms of historic significance.

Removable bookshelves were added for the library, but the original integrity of the house remains intact.

“It’s fun, but it’s a lot of responsibility,” said current librarian Kathy Bornhoft. “One-hundred-year-old buildings have their quirks,” she added, noting the City of Holyoke is good about helping out with repairs and upgrades.

On the main floor, the living room is for new items, Spanish, Western and computers; the bedroom is adult fiction; the kitchen is adult nonfiction; the breakfast room is children’s books; and the formal dining room is movies and the circulation desk.

Patrons can go upstairs for research/reference in the nursery, young adult fiction and nonfiction in the master bedroom, and art in the small bedroom. The basement contains a storytime area, TV, laptops and crafts.

Some changes over the past 50 years include wireless internet access, audiobooks, digital download books, new genres, the ability to check out artwork, author events and more.

Bornhoft said so many people, both local and nonlocal, are excited to visit the library. It has such a sense of community, she said, and there are many people who help make it last the test of time.