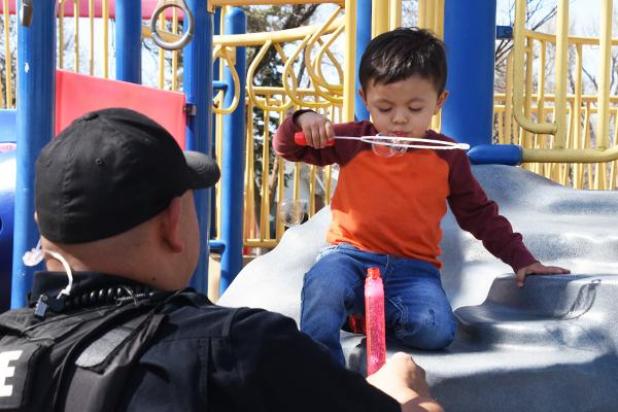 For Holyoke Police Department Officer Jorge Salas, Holyoke Elementary is more than just another stop on his patrol.
Last Friday, toward the end of the school day, Salas parked his police pickup next to the school playground. He got out and retrieved a cooler from the truck bed. It’s part of a regular appointment for him — bringing water and lemonade and shooting hoops with Holyoke grade schoolers.
On the playground, he got an enthusiastic “hi” from his nephew. Some of the other kids who recognized him argued over whose basketball team he got to be on. Salas played a quick game of three-on-three and then knelt down at the edge of the court to pass out stickers, drinks and bubble wands to the kids.
Between asking the kids trivia questions, he explained that the visit isn’t just the type of thing that got him and other Holyoke officers into law enforcement. It’s part of a department-wide effort to demystify local law enforcement, especially for children.
“Something like this only takes 15 minutes, but it’s hopefully going to make an impression that will last a long time for them,” he said.
Later in his patrol, he visited the playground at City Park and passed out more stickers and water as school let out. When he first started stopping by, he said, the kids were shy and assumed they were in trouble. Now, he said, he gets smiles and waves whenever he drives past.
In addition to their regular collection of law enforcement gear, Salas and other Holyoke police officers will soon be carrying cold drinks, popsicles, stickers, bubble wands and other summer treats along on patrols as part of an internal push to step up their community engagement efforts.
“Some people look at a policeman and think all they do is write tickets, but I want to be more than that,” Salas said. “99% of the time, you can get the same result by talking with someone and giving them a warning rather than giving them a ticket.”
Holyoke Police Sgt. Mark Werts said the department piloted taking cases of water with them on patrols last summer. Salas pushed to expand the program after incorporating it into a class project while attending Highlands Ranch Law Enforcement Training Academy. He graduated from the academy and joined the force in December.
Since he started promoting the expansion, Salas said the community has rallied behind his department. All of the items that the department plans to carry this year were donated by local individuals and businesses, including Brandi Salyers, Carniceria y Abarrotes Aldama, Holyoke Butterfly Your Nails, Cobblestone Inn & Suites, NAPA S&W Auto Supply, Scholl Oil & Transportation Company and Holyoke Lumber.
Salas said the support of Holyoke’s Hispanic business owners has been especially meaningful. As HPD’s only bilingual officer, Salas has assumed the unique role of liaison with the local Hispanic community.
“With him speaking Spanish and having been in the community for several years, that’s helped a lot with building relationships,” Werts said. “Plus, now that we have a fifth officer, it’s a lot easier for us to do these kinds of programs.”
Werts said that he and the other officers will start carrying the donated goods with them on patrol in the coming weeks. He said the program will continue throughout the summer for as long as the donations last.
Salas said he hopes the department’s efforts will help to cut crime, as well as build bridges.
“It’s been proven that building that trust decreases crime rates,” he said. “It does take a little bit of time, and it might take you out of your comfort zone, but this is one easy area where we can do that.”