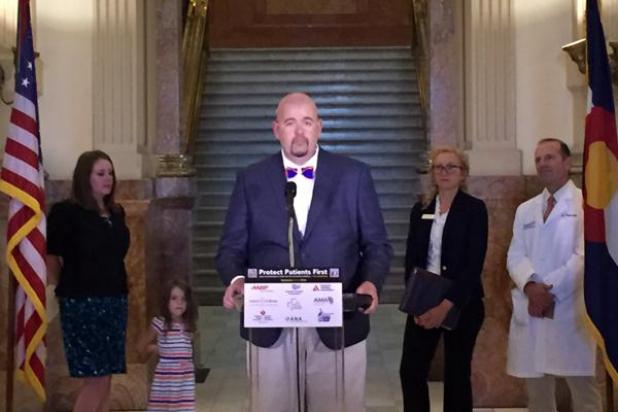 MMH CEO Trampas Hutches, pictured at center, speaks at the State Capitol Tuesday, June 27, on behalf of the Colorado Hospital Association against the Better Care Reconciliation Act being discussed in the U.S. Congress.

Colorado Hospital Association was represented by Holyoke’s own Trampas Hutches, CEO of Melissa Memorial Hospital, at a State Capitol event Tuesday, June 27, that highlighted patients and providers and their concerns with health reform proposals being discussed in Congress. These proposals include the U.S. Senate’s recently released proposal, the Better Care Reconciliation Act.
This event was the third in a series, with the first two hosted in Cleveland, Ohio, and Reno, Nevada. The coalition targeted key states with senators who could be a deciding vote for the Senate bill, including U.S. Sen. Cory Gardner.
Other partner organizations participating in the event included AARP, American Medical Association/Colorado Medical Society, American Cancer Society Cancer Action Network, American Diabetes Association, American Heart Association, March of Dimes and others.
“As the backbone of our nation’s health care safety net, America’s hospitals and health systems believe it’s vital that Medicaid be protected,” said Hutches. “I can tell you from my experiences as CEO of Melissa Memorial Hospital, a 15-bed critical access hospital in the small rural community of Holyoke, that coverage — or the lack of health coverage — has real and serious implications for patients’ health.”
Hutches explained that the Senate proposal, which would move Medicaid to a block-type grant program and thereby limit its available funds, would likely trigger deep cuts to the program. Medicaid covers millions with chronic conditions as well as the elderly and individuals with disabilities who need long-term services and support.
Hutches also said in his speech that while the existing Affordable Care Act needs improvements, those in the hospital field believe that “any changes to the ACA must be guided by making certain that we continue to provide coverage for the tens of millions of Americans who have benefited from the law.”
Hutches later said that 350,000 Coloradans, or 6 percent of the state population, would become uninsured if the proposed bill were to pass, and that 264,000 of those are on Medicaid.
When later asked what he would like to see in health care reform, Hutches listed several suggestions focusing on a free market and capitalist structure, such as allowing large numbers of people to pool together for insurance similar to how employers pool their employees for better insurance rates. “There are laws that prohibit that currently,” he said.
Other suggestions included unlimited health savings accounts, allowing for insurance across state lines and removing time-intensive regulatory compliances on hospitals for pre-authorizations.