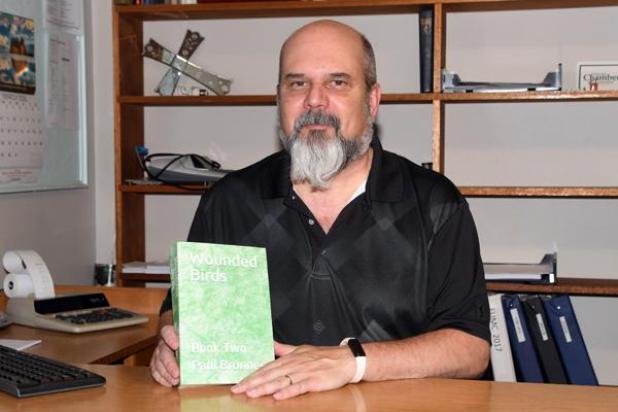 It’s not every day a pastor writes a romance novel

Paul Brunner admits that some of his friends thought he was joking when he announced that he’d written and self-published a romance novel, but it’s no joke.

“Wounded Birds” tells the story of a young man who is happily married and expecting a child. His wife dies in childbirth, though, and he returns to his mother’s home with his new baby. While there, he encounters his high school sweetheart who ends up becoming his nanny.

The story is based on a long and quite lucid dream Brunner had. The protagonist, Paul, is based on the author himself, but it’s fiction. He describes it as a “what-if scenario,” exploring how his life might have turned out if he’d gone a different way back in 1982.

The title, Brunner explained, is in reference to the idea that people take the wounds of past relationships into their new relationships.

The widowed character, Paul, made a promise to his wife that he would mourn her and honor her for one year after her death. Apparently unsure that Paul will keep his promise, his wife’s spirit becomes a comedic presence throughout Paul and his nanny’s year together.

This particular book, though it's the first to be published, is actually book two of the series. Book three is about two-thirds done, and Brunner has written about one-third of book one. They are chronological but suitably self-contained so they can be read in any order.

One of the advantages he’s found to living in Holyoke is that he’s had time, especially during the dark of winter, to sit down and write daily. He started writing “Wounded Birds” last September and just recently finished. Sometimes, he found, the words poured out. At other times, he was busy just editing and rewriting.

As a pastor, Brunner makes his living with words. He enjoys writing and preparing pieces of various lengths. Writing his first novel, though, turned out to be very intense and emotionally draining. Going into it, he didn’t realize just how attached he would get to the characters.

“Wounded Birds” is available in both paperback and Kindle editions on Amazon. It’s also available at Inklings and More Bookstore.