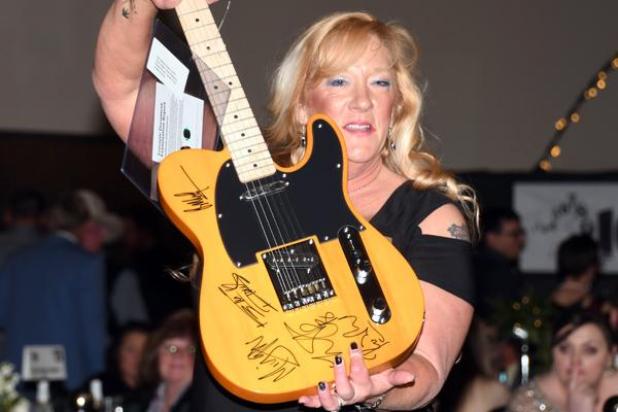 The top live auction item, which sold for $8,700, is a Fender electric guitar signed by all five of the Rolling Stones. Foundation board member Tina Looka shows off the instrument to the Legacy Event crowd. — The Holyoke Enterprise | Johnson Publications 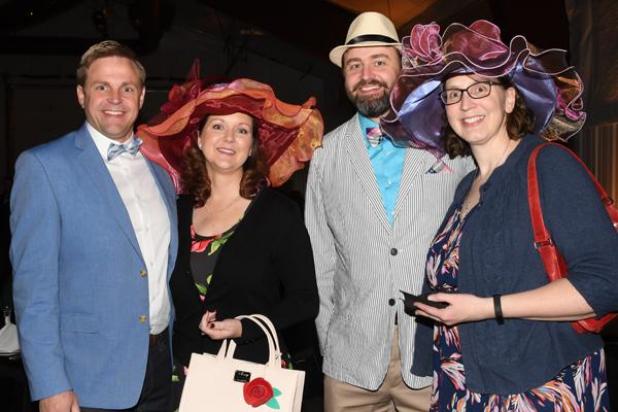 From left, Matt and Charlee Kleve and Jon and Amy Kleve are all set for the horse races. In honor of the 10th annual Legacy Event, guests were invited to dress with attire from any of the themes of the last nine years — Run for the Roses, Roaring ’20s, Western Splendor, Mardi Gras and more. — The Holyoke Enterprise | Johnson Publications 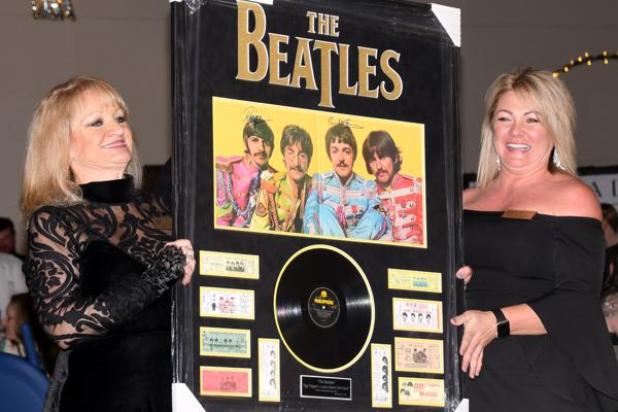 Kim O’Neill, at left, and Tiffany Weber, foundation board members, present the framed Beatles item, signed by Paul and Ringo, that sold for $6,275 during the Legacy Event live auction. — The Holyoke Enterprise | Johnson Publications 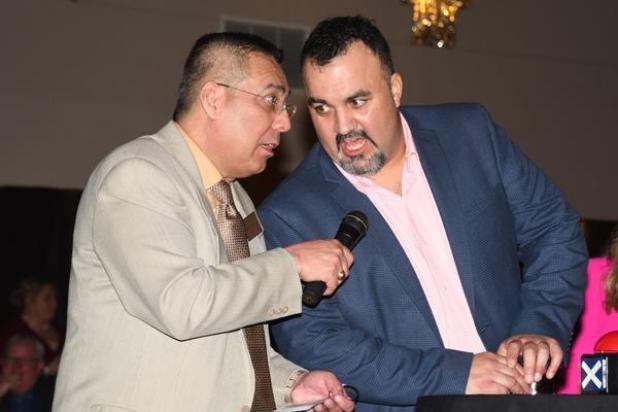 Foundation board member Jessie Ruiz, at left, gets an answer from Sherman Kage during the final round of Family Feud Saturday night. Kage’s team, which represented Regent Park, won the game. — The Holyoke Enterprise | Johnson Publications

It just keeps getting bigger and better, and the 10th annual Legacy Event certainly didn’t disappoint.

Saturday, Feb. 8, was a night of celebration for the Holyoke community at Phillips County Event Center. Guests celebrated 25 years of the Melissa Memorial Hospital Foundation and 10 years of the Legacy Event, all while raising $185,800.75 — a new record for Legacy Event fundraising.

The majority of this year’s funds will go toward a new 3D mammography machine for Melissa Memorial Hospital, with additional funds supporting medical scholarships and MMHF operations.

“The support that was shown was truly amazing. The foundation board is truly grateful for the outpouring of support given prior to the event and during the event,” said MMHF executive director Nancy Colglazier following the event. “The 3D mammography really touched the guests who were there.”

MMH interim CEO Cathy Harshbarger addressed the crowd, saying that MMH simply can’t thank them enough for the support for 3D mammography. “It’s amazing to see a community that supports each other like you do,” she said.

Megan Garrett, a mammography tech at MMH, stressed the importance of this machine to the community and the importance of getting annual mammograms. This will be cutting-edge technology for early detection that will replace an aging machine at MMH, she said.

In Colorado, 1 in 7 women are diagnosed with breast cancer every year. Garrett recognized breast cancer survivors during her presentation, including Colglazier, her mom.

From quilts to furniture to sporting event tickets, a wide variety of items were featured in the Legacy Event auction.

The top auction item was a Fender electric guitar autographed by all five Rolling Stones band members. It sold for $8,700 to Hank Hassler.

Rev. Paul and Suzanne Brunner are now the proud owners of a framed Beatles item signed by Paul and Ringo that sold for $6,275.

Another popular item was an angel food cake baked by Fae Lindgren that sold three different times for a total of $3,750.

A unique item on the auction was a Stryker Prime TC Transport Chair. Mark and Jean Clayton got the winning bid for $4,000 and then donated the chair to be used at MMH. The foundation board was pleased that a second chair was purchased for MMH for $3,407.13 by Bank of Colorado, Five Star Rentals & Equipment LLC (Mike and Deb Woodhead) and Rev. Gary and Diane Rahe.

MMHF was also fundraising for new dishes for the MMH dietary department. In addition to donations and pledges received by guests, it was requested that it be put on the live auction as well. Trampas Hutches and Lane Looka partnered together for a winning bid of $2,700.

At the conclusion of the live auction, guests could bid on one of six spots in the Family Feud game. Six teams raised $6,150, and Regent Park won the game and got to take home half of the pot.

Event celebrates ‘A Decade of Legacy’

The MMHF board of directors and Legacy Event committee members gave many hours over several months to plan the 10th annual event: “A Decade of Legacy.”

The event set a new record for table sales at 45.

Guests were encouraged to wear formal attire or dress in costumes from any of the last nine themes: Mardi Gras, Western Splendor, Roaring ’20s, Run for the Roses, James Bond 007, Romance in Venice, Titanic Grandeur, Night on Broadway and Southern Charm.

Brady Ring, an MMHF board member, served as emcee for the event, and Colglazier offered a special toast at the celebration. A photo slideshow of the last nine years was created by Garrett and played throughout the evening.

MMH staff with their family and friends, led by Harry and Julie Kinner, served a wonderful meal catered by Happy Jacks and Blisties to a packed Heginbotham Hall.The MMHF board was alsopleased to have Dr. Dennis Jelden serve coffee during the auction.

Guests danced the night away with music provided by Night Sounds of Imperial, Nebraska.

“I feel that Legacy Events bring our community together in a celebratory way while raising funds for worthwhile services that are needed in our community,” said Colglazier. “I am so honored to be a small part of this wonderful event.”