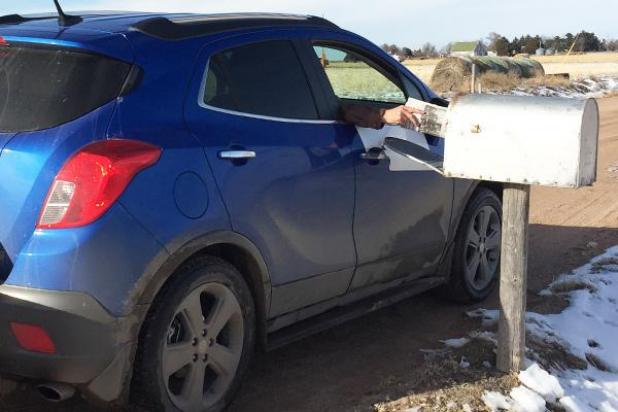 It may not look like much to someone driving down a stretch of county road, but this mailbox has been standing throughout Bob Brandt’s entire mail carrying career — and that’s no small feat for a country box. The house that it accompanies has been home to three generations of a single family, and families with deep roots in Phillips County are commonplace on his route.

Family and community changes stand out on Rural Route One 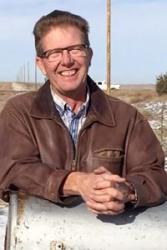 Living in an electronic world, it’s undeniable that the U.S. Postal Service has and will continue to see some extraordinary changes. It’s hard to say what its future will hold, but Bob Brandt, for one, considers himself privileged that his 30-plus years as a rural letter carrier happened when they did.
His view from the right-hand driver’s seat as he travels Rural Route One day after day has afforded him a one-of-a-kind perspective of growing families and a changing community over the years. And it’s likely no one will ever see Holyoke from quite the same angle again.
Even Brandt didn’t fully appreciate his unique position until surprisingly recently. The catalyst was taking some time off from his route to have surgery last year. Removed from the routine of driving the route and delivering mail, he was struck by a realization. There was a young couple who had recently welcomed a second child. Those kids marked the fourth generation of that family on Brandt’s route.
Now anyone who knows him won’t be surprised to hear that Brandt’s gears started turning and he couldn’t stop thinking about all the prevalence of multigenerational families he serves. He easily thought of eight or nine such families. When he returned to work and was driving past people’s homes again, he realized there were even more.
All told, he came up with 14 in that first generation of customers who now have multiple descendants on the route. Most of the first generation are no longer on his route, having died or moved, but their legacies remain through children, grandchildren and great-grandchildren living in the same area — sometimes even the same house.
On a community level, Brandt is inspired to live someplace where family is of such a value that these patterns can emerge. Things like 50-plus years of marriage speak to the way of life in rural America.
Beyond the family values evident in these lineages, Brandt acknowledged that the stability of the economy and the very existence of this community depend on these families. Most are deeply entrenched in local agriculture, with families farming and ranching for generations. “They’re the reason we’re here,” he said, “and that’s of great value to me.”
Driving Rural Route One, Brandt has had a front-row seat to see how agricultural advances change people’s lives. Much of the changes are a function of irrigation, which he found particularly interesting. Houses that once stood in present-day irrigated circles have gone away, and more homes have been built on the corners.
Since his route is 145 miles long and 135 of those are on gravel, Brandt is acutely aware of changes to county roads, too. Oftentimes new ones cut down on the distance he has to travel, and off the top of his head, he could think of 3 miles added specifically to improve his route.
Since the rise of Amazon Prime, Brandt has seen package delivery in the area transformed. He routinely delivers dog food, cat food and kitty litter, and Amazon Prime Pantry shoppers receive 50-pound boxes of groceries, snacks, drinks, cleaning supplies and the like. It truly has changed the way people who live in rural areas shop, and Brandt has noticed that the farther someone lives from town, the more staples they tend to have delivered.
Though the big-picture things he’s witnessed as a rural letter carrier are interesting, Brandt celebrates being a part of his customers’ lives on a personal level, too. He jokes that you can’t hide secrets from your mailman. After all, when he’s delivering 50-odd packages a day (or well over 100 during the holidays), he sees some interesting stuff. Peacocks, fish, elk horns, a coconut — you name it, and he’s probably seen it.
But on a more serious note, a mail carrier gets to be involved in all the major milestones. He delivers Social Security Numbers to newborns — often the first piece of mail they ever receive. Diapers are ordered online; gifts are mailed from distant friends and family.
When a couple plans a wedding, save-the-dates, RSVPs, presents and thank-yous make their way back and forth through the postal service. After years together, cards and party invitations commemorate big anniversaries as well.
Even when the inevitable bereavement cards must be delivered to a family, Brandt plays a role, and through it all, he celebrates the opportunity to be a part of people’s lives.
The postal service as we know it may not be around much longer. In the latter half of his career, Brandt has already seen massive changes due to things like online banking, 9/11 and Amazon. Talk of things like drones delivering packages makes it especially easy to imagine the changes have only just begun.
Brandt’s position was already rare. In Holyoke he’s the only full-time rural letter carrier, as the other five rural routes are contracted. Among rural letter carriers as a whole, many move or change routes at some point during their careers, moving up the ladder. Driving the same route for over 30 years and getting to know the families he’s served through multiple generations is something special, and Brandt honestly doesn’t know if there will be another 30 years of Rural Route One for someone else to experience.