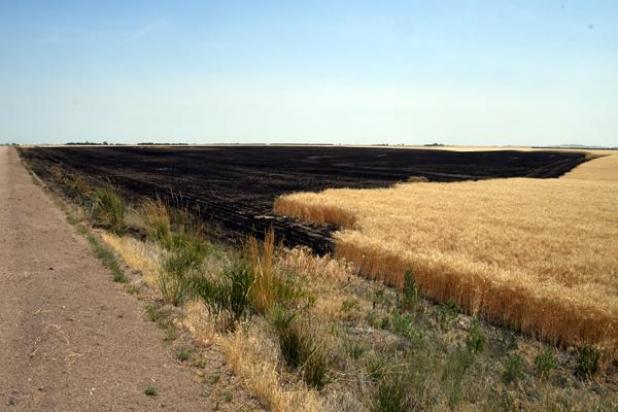 As a result of one of the numerous lightning strikes in the area Sunday night, fire cut a swath through a wheat field on the south side of County Road 20 between roads 27 and 29. — The Holyoke Enterprise | Johnson Publications 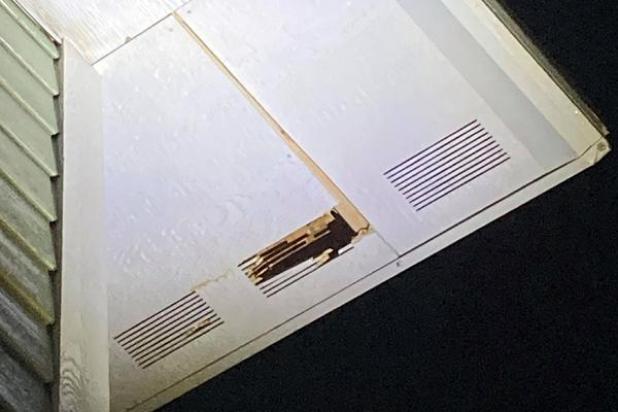 Lightning blew a hole right through the soffit on the northeast corner of Dylon and Brittany Daniel’s house during the June 28 storm.

Shocks akin to those received when touching an electric fence were felt by several local people when lighting struck close by Sunday evening, June 28. Some of the bolts led to grass fires as well, keeping Holyoke Volunteer Fire Department busy from 7:30-11:30 p.m.

By the time the day was over, HVFD had responded to five different locations within its own territory plus a call for mutual aid in Yuma County as the storm moved south.

When all was said and done, nobody was injured and property damage was minimal, but the close calls serve as a shocking reminder of the danger that thunderstorms pose when it’s as dry as it has been lately.

Chief Stacy Rueter reported that HVFD’s first call that evening was at 7:29 p.m. to a wheat field about 6 miles west of Holyoke.

The fire was called in by Matt McCabe who saw smoke from his home just over a mile away.

At about the same time, Misty Torres and her family were outside their house about 3 miles west of Holyoke riding four-wheelers and playing in the field. Suddenly Torres heard a lightning strike and felt a minor shock. Across the road from their house, a fire started in the ditch.

Fortunately, her husband, Ozzy, holds onto expired fire extinguishers that can no longer be used in his trucks. They hurried to the shed where they’re stored and managed to extinguish the fire right as Phillips County Sheriff’s Office arrived.

Another lightning strike started a fire about a quarter mile west of the Torres house, so they headed that way with fire extinguishers too. The blaze was about halfway out when HVFD showed up and finished the job, Torres said.

At about 8:15 p.m., Briana Worley and her family were at their home about 4 miles south and 2 miles west of Holyoke. Someone happened to be driving by and stopped to ask if they’d been burning earlier. They hadn’t, and Worley realized a fire must have been started by the lightning strike that recently shook their house.

“We’re lucky he was driving by,” Worley said, pointing out that there’s no telling how long it would have taken them to notice the fire otherwise.

HVFD responded directly from the fires west of town. Once there, it took firefighters just minutes to stop the blaze by their house, Worley said, which was good, since HVFD was far from being done for the night.

Also 4 miles south of town but to the east, Brittany Daniel and her family were inside their home when it was struck by lightning. It was incredibly loud, and Daniel said she felt a minor shock. Nevertheless, they weren’t initially sure if the house was hit directly because some of their lights were still on.

Upon further investigation, the Daniels found that the lightning struck the northeast corner of their house and blew a hole straight through the soffit. The current apparently traveled through the metal fascia, causing damage along the way.

Daniel said the day after the storm that her husband, Dylon, was in the process of assessing the damage on the roof. Inside the house, they found that the GFI outlets, LED lights, internet router and phone line were “toast,” but their appliances were unaffected. “It could have been so much worse,” she said.

Though there was no active fire, HVFD responded to this lightning strike as well to check the walls with a heat gun to rule out any hidden trouble.

One thing the Daniels learned through this experience is that their electrician recommends not having a lightning rod. When they finished building their house back in March, many people suggested that they install one. In the aftermath of Sunday’s lightning strike, Daniel said, they were informed by their electrician that they were better off without one.

Though firefighters were kept busy putting out one fire after another, Rueter said that they were rather easily managed. Without their diligence — and a fair bit of luck when it came to people spotting the fires — it’s easy to imagine the situation being much worse.