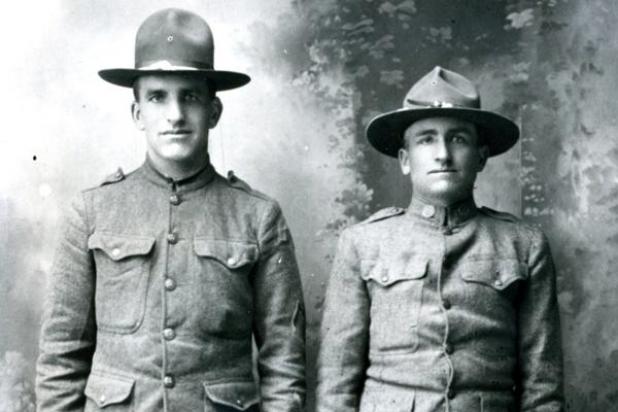 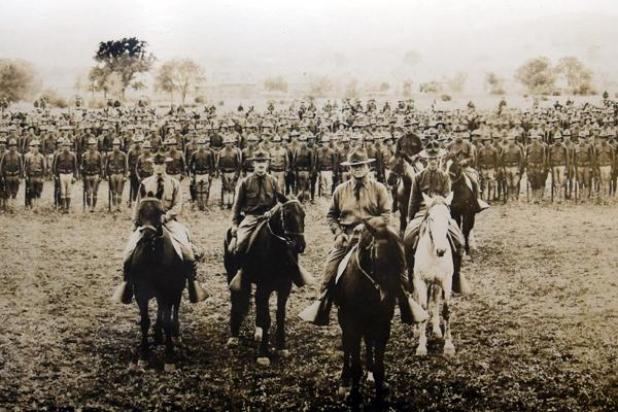 This is only a portion of a giant panoramic photo housed at the Phillips County Museum. In its entirety, the photo is a sight worth seeing in person. It is one of the many items donated to the museum by Leslie Taylor, who served in World War I and later lived in Haxtun. According to the museum, the photo is probably of the 35th Infantry Regiment at Nogales, Arizona, in 1918. (Source: Phillips County Museum)

It was 100 years ago, July 9, 1917, that Phillips County’s first war contingent left for Akron having received mobilization orders. Twenty-five county men were enlisted in the National Guard and were in camp with Corporal Wm. W. Poe. This was after draft registration, but before the draft lottery.
According to the July 13, 1917 edition of the Holyoke Enterprise, the men received a special address at the chautauqua because there wasn’t enough time for citizens to organize a send-off. The former governor of Iowa, L.M. Shaw, addressed them, emphasizing the necessity of drill and obedience to orders.
A collection was taken up, netting $54 to “carry the boys to Akron and to provide for their comfort en route.”
When the U.S. first entered the war April 6 of that year, Phillips County — and probably every county — had a response. A headline on the front page of the following edition of the Enterprise read, “Patriotic Demonstration. People of Holyoke Not Lacking in Loyalty at This Time.” It goes on to describe the happenings in Holyoke the day after joining the war.
A band was assembled and marched down Inter Ocean Avenue in a parade that ended at the courthouse. There, impromptu speeches were made by several leading citizens and met with great applause. The article ended with this appeal to citizens: “The real patriot is one who will respond when the recruiting officer calls.”
On April 20, Phillips County Sheriff Ed. W. James made a proclamation to “assure all residents of foreign birth, that even in the event of the United States becoming actively involved in the great European War, no citizen of any foreign power resident in Phillips County, Colorado, need fear any invasion of his personal or property rights, so long as he goes peaceably about his business and conducts himself in a law-abiding manner.”
Each week the Enterprise ran news about the war from Western Newspaper Union News Service, keeping residents informed about the goings-on abroad.
The first call in the county was for 30 Navy recruits. It was reported May 4 that Chief Quarter-Master of the U.S. Navy J.E. Hill was in town signing up recruits. Men were told that machinists draw $44-$77 per month. The next week it was reported that Hill continued to recruit despite the Navy being full and the greater number of applicants were being turned away.
At the same time, county people organized its local Ways and Means Committee. “The war will not be decided by bullets but by a scarcity of food,” the newspaper read. Throughout the year, readers were asked “Won’t you help defeat Kaiser?” and encouraged to use more apples so meat and wheat may be sent abroad. Elsewhere, they were told “Feed the Fighters! Win the War!!” and locals signed a pledge to save bread, meat, fats and sugar. Miss Paulsen, who taught cooking classes at the high school, instructed her pupils on how to conserve food, and W.E. Heginbotham was appointed county food administrator. At one point, an entire train of wheat was donated to help the cause. Twenty-three cars were loaded with wheat, all but one coming from Phillips County. Some cars held as much as 90,000 pounds.