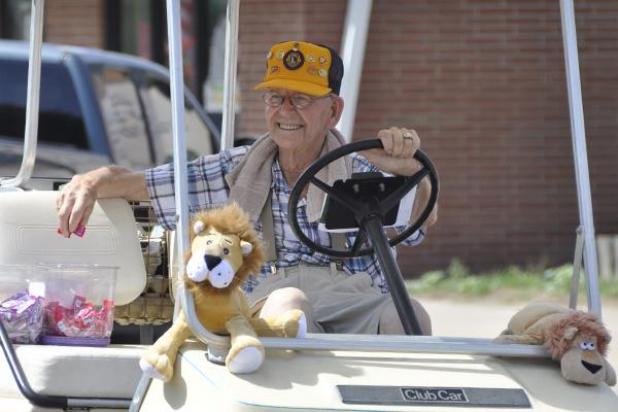 In addition to helping line up the Phillips County Fair parade for many years, the Holyoke Lions Club often gets in on the candy-throwing action themselves. In the 2012 parade, Don Beckius drives a golf cart decorated with lions, offering a smile and a wave to everyone lining the street. — Johnson Publications file photo 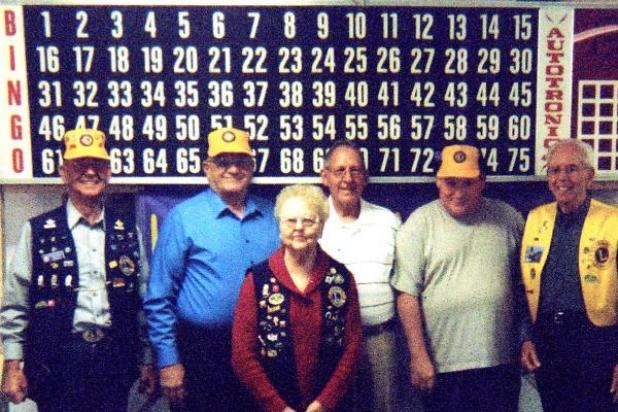 Bingo nights from days gone by were made possible by Lions Club members, pictured from left, Don Beckius, Gene Hinck, Jean Brown, Larry Stein, Leroy Smith and Rich Brown. Bingo is not only fun to play but also raises money for a college scholarship.

Looking back on 75 years of service

In the same year that Lions Clubs International is having its centennial celebration, members of the Holyoke Lions Club and the community that they tirelessly serve will be celebrating the local organization’s 75th anniversary. Festivities begin this Saturday, Aug. 26, at 1:30 p.m. at the Phillips County Event Center, and everyone is invited to attend.
At 1:30 p.m., Cub Scouts Pack No. 32 will lead everyone in an opening flag ceremony. The Holyoke Lions Club is the Cub Scout’s charter organization.
The program will also include a presentation by Jason Romero, the first and only blind ultra-athlete to run across America. In 60 days he ran from Los Angeles to New York, averaging 51 miles per day. Romero is committed to the mission of demonstrating that the blind are capable of anything if just given the chance.
Also incorporated into the program will be a KidSight demonstration. Colorado Lions KidSight provides free vision screenings and follow-ups for children 6 months through 6 years old. Last year in Colorado, KidSight screened 54,097 children. Of those, 11.2 percent were referred for a complete eye exam due to a detected vision problem.
Year-round the Lions Club collects unwanted eyeglasses and hearing aids via drop boxes at the Holyoke Community Federal Credit Union, Bank of Colorado, Bank of the West, First Pioneer National Bank and Melissa Memorial Hospital so they can be recycled and used by those in need. Even at their 75th anniversary celebration, the Lions are looking for ways to do good and will be collecting glasses and hearing aids there as well.
Guests will enjoy refreshments, the opportunity to meet Leo the Lion, displays featuring Lions Club history and locally grown items, and contests and door prizes.

Local Lions legacy begins in 1942
It hasn’t exactly been easy to find photos documenting the history of the Holyoke Lions Club in action, but that’s simply the nature of an organization dedicated to humbly serving behind the scenes.
In 1942 Holyoke Lions Club was formed. At the time, only men could join, annual dues were set at $5, 27 charter members joined, and a congratulatory message was received from the club in Holyoke, Massachusetts.
Since then, much has changed, but the spirit remains the same. Membership has gone from the original 27 to its peak of 111 in the ’70s to around 30 presently. At the 1942 charter night, the main speaker noted that the club was intended to be primarily one of service to the community. To that end, the local club has thrived for decades.
As Lions founder Melvin Jones said, “You can’t get very far until you start doing something for somebody else.”
One would be hard-pressed to find anyone in the community who hasn’t benefited from the good the Lions do in some way — even if they didn’t know it. Just think of the holidays. Whether it’s the littlest of kids participating in the Easter egg hunt on the courthouse lawn or elementary students dressing up for the Halloween costume contest or those whose Christmas is made better by a Country Christmas hot apple cider or the Adopt-A-Family program, Holyoke residents’ holidays are made special throughout the year by the Lions Club.
In the case of the Halloween costume contest, it’s a tradition that has continued since 1952, almost as long as the organization itself has existed.
“A big street party on the east-west street along the north side of the courthouse park attracted several hundred children after they had finished their trick-or-treat rounds in the residential section. The Holyoke Lions Club, which sponsored the party, was pleased with the big turnout and the party seems to have been a big success,” the Enterprise reported in 1952. The article described races and a costume contest, as well as apples and doughnuts given to the youngsters.
Now, 65 years later, in the community of Holyoke, the Lions Club Halloween costume contest is still a staple to the yearly calendar.
Whether they have entries in parades or simply lend a hand in their organization, the Lions have a way of being involved in all the most community-oriented events, including the county fair and Country Christmas.
Anyone who drives has likely unknowingly benefited from the service of the Lions, who are committed to “sprucing up Colorado” through regular highway cleanup. Since 1992, the local club has walked a 2-mile stretch of highway twice a year to pick up other people’s litter.
For those driving within the town, many have certainly appreciated the dozens of American flags raised around town for 14 separate occasions each year.
Holyoke Lions have also played a crucial role in recreation in the community — from the city park to the mini park to the ballpark and the fishing pond.
Some may remember car raffles held by the Lions Club. In the 1980s, the proceeds from one of those raffles went toward the construction of one of the picnic structures at the city park. While the City furnished the concrete, the Lions provided the labor and the building.
With recent renovations to the mini park, the downtown fixture has been on many people’s minds, but how many remember how it first came to be? Sept. 15, 1981, the Lions Club purchased the corner lot and, again, put in some of the labor to make the structure a reality. In November 1983 the mini park was dedicated, and a year later, the Lions Club presented the deed to the City.
At the ballpark, the Lions are known for their tasty burgers, but it’s less common knowledge that their concession stand funds the umpires for summer youth baseball and softball games. Another Lions activity that puts funds into supporting local youth is bingo. While many community members enjoy the game of chance hosted regularly at the Lions Den, they may not know that the money raised goes toward a college scholarship.
If there’s one thing that makes the locals think of the Lions Club, it’s the fishin’ hole. Its May 16, 1992, dedication drew many children and families, and later on residents of Prairie Vista nursing home headed out to try out the town’s latest leisure activity. Since then, the pond has been a valuable asset for residents of all ages.
In late 2000, the pond received some major upgrades, and in true Lions fashion, members were out there getting their hands dirty and contributing to construction.
Earlier this year, a youth fishing clinic was held to celebrate 25 years of the pond in Holyoke. Beyond maintaining beneficial facilities in the community, Lions are committed to educating the youth, as well.
These projects are just some of the major ongoing services the club provides. Throughout their 75 years, the Lions have also been involved in blood drives, supporting FBLA, distributing diabetes information, post-prom breakfast, giving out Arbor Day trees, health fairs, golf tournaments, peace poster contests, lending medical equipment, youth exchanges and much more, always fulfilling the club motto: “We serve.”
It’s only fitting that in the 75th year of the organization’s existence they should be honored as the citizens of the years at the Chamber of Commerce gala. The sentiment of their nominator sums up the club’s contribution to the community nicely: “Their service truly makes Holyoke a better place to live. They make it a better place to raise our children!”
With 75 years under their belt, the Lions don’t seem to be slowing down, and that’s something Holyoke has to be thankful for.