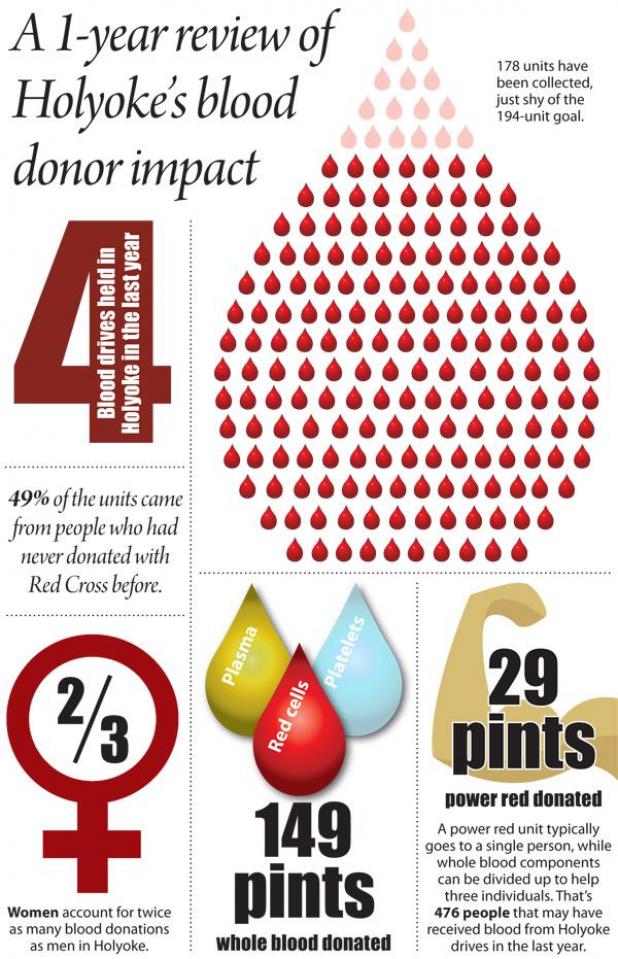 May 1 marked one year since Holyoke started hosting Red Cross blood drives. Looking back, it’s fascinating to see the impact one small community can make. Through four blood drives hosted during that time, 178 units have been donated. Of those, 149 were whole blood donations, and 29 were power red donations. That amounts to 476 people that could have potentially been on the receiving end of the blood donated in Holyoke.
Red Cross representative Cathy Carman explained that the blood is used to meet local needs first but that it can then be sent out nationwide as needed. Every 2 seconds, someone in the United States needs blood. Eastern Colorado falls in the Midwest Blood Services Region of the Red Cross, which also includes Nebraska and southwest Iowa.
The Red Cross provides blood to nearly 90 hospitals in the region and must collect about 400 pints of blood a day to meet the needs of patients there. Nationally, the Red Cross must collect about 13,000 pints of blood every day. Once donated, blood has a shelf life of just 42 days, so continual donations are vital.
So far, Carman has been impressed to see the community of Holyoke “taking pride in getting back into giving.” That said, the need never stops, so hopefully people will keep it up. The next opportunity to give locally will be Monday, May 20, at First Baptist Church from 11 a.m.-5 p.m. Though walk-ins are welcome, appointments can be scheduled at www.redcrossblood.org.
The four previous drives averaged about 45 donations each, but the goal set for the upcoming one is 64 units. And that’s just the start of the big goals set for the second year of donations. In 2018, drives were held in May, June and November. 2019 has already seen one in February, and May 20 will be followed by drives scheduled for July 16 and Nov. 1. Whole blood can be donated every 56 days, so many donors could donate up to six times a year. In places with enough response, drives are often held every 56 days to give donors the most opportunities to give.
Of course, the role played by those who donate is crucial, but the drives can’t happen without a host either. Sara Krueger initially brought the Red Cross to Holyoke and has hosted all of the drives so far. It was always her goal, however, to have other volunteers involved in the process.
On May 20, recent Holyoke High School graduate Savannah Burris will be hosting the drive as part of a scholarship opportunity provided by the Red Cross. That in and of itself shows the process at work. Krueger was involved with blood drives through National Honor Society as a high schooler in Burwell, Nebraska. In 2012, she hosted a drive as a part of the scholarship program herself.
“I’ve felt that blood donation is a very important and worthwhile cause since hosting a blood drive in high school,” she said. “That experience showed me the tremendous impact that blood donors have on people they’ll never meet.”
As was the Red Cross goal, Krueger went on to host blood drives as an adult, and through them, Burris is part of the next wave of students making a difference. For Burris, who will be studying nursing at University of Colorado-Colorado Springs, a passion for health care is part of what drew her to hosting a blood drive.
Though the drive isn’t until May 20, she’s been busy already recruiting people to donate, and the response has been extraordinary. Having another host, Krueger explained, has reached an entirely different demographic. Though the two have some overlap because of their connection through the Baptist church, Burris has encouraged many high school students to try donating for the first time. She’s noticed that being approached by a familiar person seems to make people more likely to sign up.
Though Burris has enjoyed being involved in the blood drive process, she’ll be headed to college soon. Since the Red Cross intends to have four drives in Holyoke each year, the need for more volunteer hosts remains. Individuals can step up to do so, as Krueger and Burris have, but it’s also something groups, clubs or organizations can do.
So far the Baptist church has proved to be an ideal location, and future drives are already scheduled to be held there, so people interested in hosting or helping out won’t need to worry about finding a site. As far as Krueger is concerned, being a host is beneficial to others and oneself, and she would certainly encourage others to give it a try. “Hosting blood drives in Holyoke has been an emotionally rewarding endeavor,” she said, “and we are all impacting many lives through the efforts of all those involved in the drives.”
The Red Cross shares a statistic that only 3% of Americans donate blood, despite the fact that 38% are eligible to do so. Clearly, there are plenty of people out there who could step up to donate, but what about the people who can’t?
There are a number of things that might disqualify someone from donating — health, weight, travel, tattoos, medications. All that information can be found at www.redcrossblood.org. That doesn’t mean those people can’t be involved. In addition to volunteering or hosting a blood drive, simply spreading awareness about the need for blood donors can make a difference. As Burris quickly learned, word of mouth is a powerful tool to make a difference.
As Holyoke celebrates a successful year of getting back into blood donation, the Red Cross happens to have a critical need for blood. Donors who have O-positive or O-negative blood types are especially needed. Since 45.5% of Holyoke’s units have been Type O, those donors seem to have received the message. It’s worth noting, however, that all blood types are needed.

“I’ve always wanted to make a positive impact on the world, and so I know that by donating I can help others in a big way. I’ve received emails from the Red Cross letting me know that my blood has been used down in Texas. It gives you a sense of pride to know you have helped someone live another day. I also donate because, in a way, I believe in Karma, and I hope that if I ever need help, that someone else’s donation will be there for me. You get what you give, so I try to give as much as I can.” – Destiny Lohman- Brown

“I donate blood because I know it will help others. And because I needed a couple of units transfused once, if someone hadn’t donated I might not have gotten them and may not be here today, so I know how helpful and important it is to donate.” — Janel Flores

“When I was younger, I was in a car crash and needed blood. I had already been donating through college because my grandmother did it. As I began working in EMS, I saw that blood saved lives — in a new way. Now they can do so much with all of the components. I feel like a live organ donor affecting more than one life. My best friend is alive due to organ donations, so blood donations feel like I can do the same in helping others. Through blood donations, I feel like I can give at a higher level above my job in EMS, to help save a life. I’m so grateful to be able to give blood.” — Lisa Werts

“I donate blood because I want as many people as possible to get the blood they need after an accident or surgery so they can go home and see their families again. I am personally O-Negative, and my blood can be given to any other blood type no problem. Because of that, I feel that I should give as much as possible to help save a life.” — Troy Brown