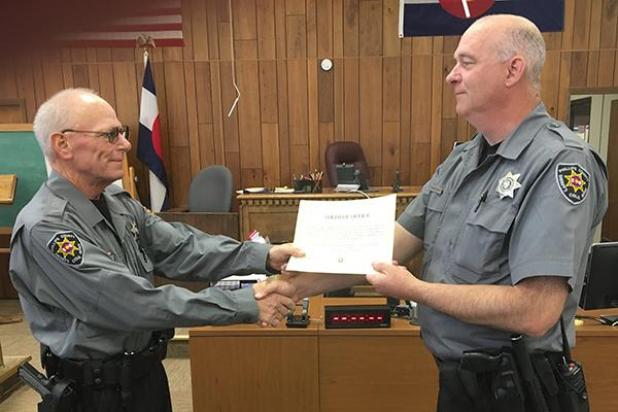 Phillips County Undersheriff Michael Beard, pictured at left, is sworn in by Sheriff Thom Elliott on May 1 at the courthouse.

Having spent the past decade as an officer for Haxtun Police Department, Michael Beard is looking forward to the additional challenges and administrative responsibilities he will face as the newest addition to Phillips County Sheriff’s Office.

On May 1 at Phillips County Court House, Beard was sworn in as the PCSO undersheriff, replacing JR Myers, who recently took a job with Holyoke Police Department.

Beard’s experience started off with service in the Army and Air Force. From there, he spent 23 years in refrigeration and mechanical work. He started out in California but transferred to Denver in 2000. As an empty nester, he made the decision to get back into law enforcement and moved to Haxtun, where he started with the police department in August 2010.

Beard has been married to his wife, Laura, for 38 years. She was employed by the Haxtun hospital for several years and currently works at Davis Day Care. Beard and his wife have three daughters who are in their 30s and five grandchildren.

Though he lives in Haxtun, Beard actually worked in Holyoke with the police department when it was short-staffed a few years back. In a role now serving the entire county, he is looking forward to getting to know the eastern half of its population. It is, of course, not entirely unfamiliar as the various law enforcement agencies in the county often work together on operations that require additional manpower.

On top of that, Beard is a firearms and Taser instructor. As such, he has trained officers in the area in the past and will continue to do so.

“I’d like to bring a strong skillset to the sheriff’s office, and I think my experience with Haxtun and my experiences through life will do that,” Beard said.

In particular, he is looking to make a difference in the areas of drug-related crimes and “career criminals” in Phillips County.

When he’s not busy with work, Beard enjoys competitive shooting. It all started when he was on the Army Marksmanship Unit and competed at Camp Perry. Through the years, he’s competed with a number of different firearms. Over time, though, he turned his focus to benchrest rifle, drawn to the precision it requires.