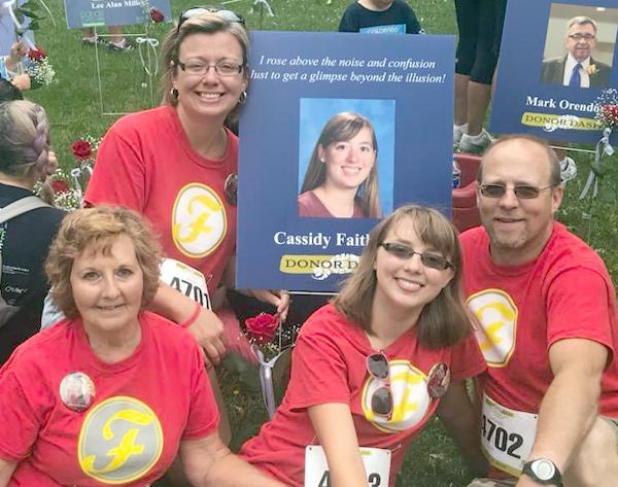 A photo and a rose honor Cassidy Hale in the memorial garden at the 2018 Donor Dash in Denver. Maggie Busch and Jackie, Tayler and Randy Hale, pictured from left, completed the 5K run/walk to honor Cassidy and other organ and tissue donors, to celebrate the lives of transplant recipients, and to recognize those who continue to wait for a lifesaving transplant.

Organ donation: a chance to shine on

Hale family readies for Donor Dash 5K
National Donate Life Month is drawing to an end, but the Hale family is already looking ahead to the next opportunity to honor Cassidy and raise awareness. On July 21, they will participate in the 20th annual Donor Dash 5K run/walk in Denver. It will be their third time, and each year, they wear Flash-inspired shirts designed by Cassidy’s high school class.
The goal of the Donor Dash is threefold: to honor the lives of organ and tissue donors, to celebrate the lives of transplant recipients, and to recognize those who continue to wait for a lifesaving transplant.
It’s a sobering experience but one Tayler would recommend nonetheless. Even if someone isn’t connected to the world of organ donation, she explained, it’s still worth going to.
Last year, a record-setting 6,419 people participated. Many teams wear shirts that honor donors or recipients, and Jackie noted that she can’t help but wonder if part of Cassidy is there in the crowd somewhere.
Randy and Jackie welcome anyone who would like to walk or run on the Faith in Flash team to contact them. If that’s not possible, there are countless other ways to be involved in the Donate Life movement. Register as an organ donor, tell a friend, share on social media. How remarkable would it be to see yet another local surge in donor designation rates as Cassidy’s memory continues to shine on?
Organ and tissue donations made after death aren’t the only way to make a difference either. Kidney and liver transplants, for example, can come from living donors. According to Donate Life, 114,000 people await lifesaving organ transplants. Of those, 82% need a kidney and 13% need a liver. In 2017, living donors made more than 6,000 transplants possible.
For those looking for a way to make a difference that carries less risk, there’s the bone marrow registry. Even easier than that is being a blood donor. Even in Holyoke, one doesn’t need to look far to find the opportunity. On Monday, May 20, a blood drive will be held at First Baptist Church.
Of course there are people out there who can’t donate for some reason or another. For them, maybe raising awareness is the way to make a difference.
For more information about National Donate Life Month, the Donor Dash or organ donation in general, visit www.donoralliance.org/.